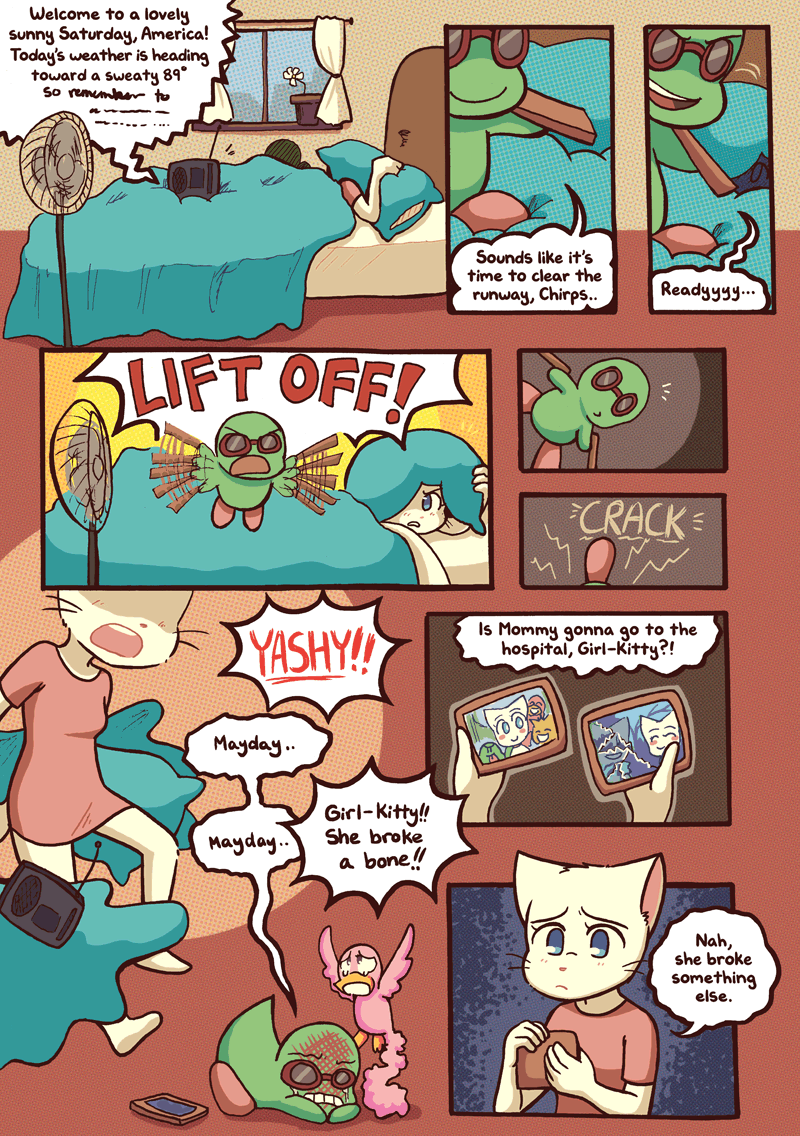 Veronica: To all newcomers, welcome! I hope you enjoy your stay.

You may want to note that this chapter is a 2009-era redraw version of a 2006 original. While you’ll see the art revert back to older standards in a few pages, it’s all made to flow together, so just keep reading.

But of course the classic other “Unfulfilled Day” has its own special feel. Just like how I heard on tv today, “Classics never get old.”

Why does this reminds me so much of VG Cats?!

Because the page depicts a cat playing video games!

im new, and these are awesome!

I love these comics!!!

THank you for making them so awesome!!!!

I’m posting all of my comments on my second read-through, so although I try to point out spoilers, some may not be marked. Still, don’t let that stop you from reading them! Good luck!

aweaome i loves your comic, si si is good

she looks funny with a neck

(seriously, putting an ad for a candy company on the first page of the comic, it’s too obvious not to say this!)

I’m all caught up now, so I came back to leave a post on the first page.
BSCB ROCKS!

@Randomness:
Go to the extras page and scroll down to graveyard.
Those are where the original comics went.

A great start to BCB

I will read the original comics so I can see what it was like.

Where can i see the originals or the ones before this?

look for my comment in almost all comic,s people persons lol

BAD YASHY!Why the hell was she doing that in the first place?

-sigh-
i remember reading the first page of this comic…
now im reading it all over AGAIN! ^-^

I kind of want to see the original version too, even stuff that supposedly sucks has value IMO

ummm this Anthro comic interest me i gonna star reading it

:?: Lol I didn’t get this comic he first time I ready it. LOL

the* And I just meant this one panel with Chirpy calling Yashy mother.

Sorry, I’m not going to read a comic that does this…

What did you use to make this comic website cuase i wanna make one of my own.

LUCY! YAY! And somewhat-hurt Yashy. Not so yay.

Hello to all who got my message

LOL is she freaking naked?

hey, i now have a reason to put ” the wii anonymous” in my post, theres other anonymous here!
oh and other anonymous, if your new, youll learn there “naked” a lot.

sincerly, the wii anonymous who decided to re-re-read this comic >.> DONT JUDGE ME!!!

A good start to an amazing webcomic.

We never really saw much of Jordan, did we?

@anonymous (2 above me)
Most of the characters are drawn without clothes, with the exception of a few accessories such as Lucy’s bow, Mike’s Scarf, Daisy’s necklace etc. Some characters though have regular clothing, such as the later introduced McCain, Jessica, Rachel, and that one creepy guy that followed Daisy around.

Oh, as a rule, whenever they go to the beach or somewhere formal, they will usually be given clothing.

Wait, what’s going on with amaya in the incentive comic? why is she talking? This makes no sense.

wow its been a while since i read this one

lucy has HUGE ears in that last panel

This is a great WebCommic

Oh I didn’t notice that Lucy was in America until much, much later when I read it carefully…

well yeah she in america. USA USA!! lol i love this place. and

she gots big ears. lol dumbo -waits to get smacked-

hello,
nice, your comic strip.
I just wanted to know where you can find your comic download (to carry it with me).
and also where I could see the old version of “Simple Pleasures” and “confrontation” just out of curiosity.

sorry if there are problems in what I say. because I use google tradution.

this continues like this, I’m fallen in love with your comics.

Wow there is so much foreshadowing in this … . with the boken picture and all

hehehe this page never gets old…

All of the previous chapters are in the Extras section, under Graveyard. An eBook version might be coming later.

They’ve been through so much. It’s always good to visit the past and get away from drama for a while.

It’s weird seeing lucy without her bow, she looks really weird but i cant tell why?
Also love the comic

Ok, stupid question, what or who is Suitcase? The website publisher? the book publisher? One of tash’s frends? I have no idea

And so it begins…

That webcomic is awesome.

when you go back through the archives is really fun to see while your reading it the evolution of the art style, also great comic!

this is the coolest comic in the whole world

why in black and white

HEYHEY!~~ new comers..wazzzaaappp BD just going back to see the old bittersweetcandybowl >u< New comers have a long way to go

How do you favorite this comic, because I want to favorite it.

how do i put this comic on my favorites panel?

Wow Lucy looks so innocent, only time will change that >:D

I just noticed the crack on the picture being of Lucy and Mike. And after reading the latest chapter too! oooooh!

went back and re-read the entire thing, and thought WOAH FORSHADOWING
still good even the second time xD

Wow, I remember when this page had like, 20 comments. This my 5th time re-reading it and I am still ever-in love with this. Good work Taeshi, I hope you continue this comic for a looong time

^^^
Me too!
It’s amazing how much things have changed.

How can we see the older editions of the new chapters?

@Marta: they’re in the Graveyard section of Extras. You can see all the deleted comics there. ^^

Comic’s. It’s like one T.V but no remembering lines.

IVE BEEN READING THIS FOR TWO YEARS

I remember when i saw this page for the first time, it bring me good memories =D

Just knowing at the very beginning where the story is headed in about 70 chapters is pretty mind-blowing.

I look back on this now, and its so WEIRD to see Lucy without her pink bow!

I see the foreshadowing in the cracked picture now. Good play there.

This comic gets funnier every time I reread it.

Words of a lunatic shut in but does that picture frame allude to the current state of lucy and mike’s relationship?

I don’t quite understand “No, she broke something else”

My 2nd time reading through this! This is my favorite comic! It makes cry to know I found about this comic on the page of a unpopular comic, I guess .I got lucky I could have just ignored the Link and missed out

sniff
i love this comic

this comic is freakin awesome, just read it all, keep it up!

I have read through this entire comic about twice now and I am still enjoying it. I really enjoy the way this comic is heading with all the relationships and drama, but I enjoyed the comic more when it first started. I enjoyed the simple adventures and gradual story progression along with the emotional moments the characters had every few chapters. There are some other things I do not like about the newer entries in the comic. I enjoyed the old coloring style much more than the new one and the old character design (such as Lucy’s rounder head) is also better in my opinion. Anyway I will still read and love this comic. I hope this comic continues for a long time. I really support this comic and can’t wait for the new entries.

I love this series! So well planned! :3

This is my “have read this comic way too many times” read-through.

It hurts a little more every time. I miss this simplicity. I miss this calm. I miss what (and who) we’ve lost.

It doesn’t get any better than this, my friends.

Start of “Lucy the Tsundere”

I can’t wait to start to read!

Im gonna try to make fanart when I get my hands on the next chapters, maybe ya’ know, it probably is gonna get interesting~

It’s getting so fricking goooood eeeek