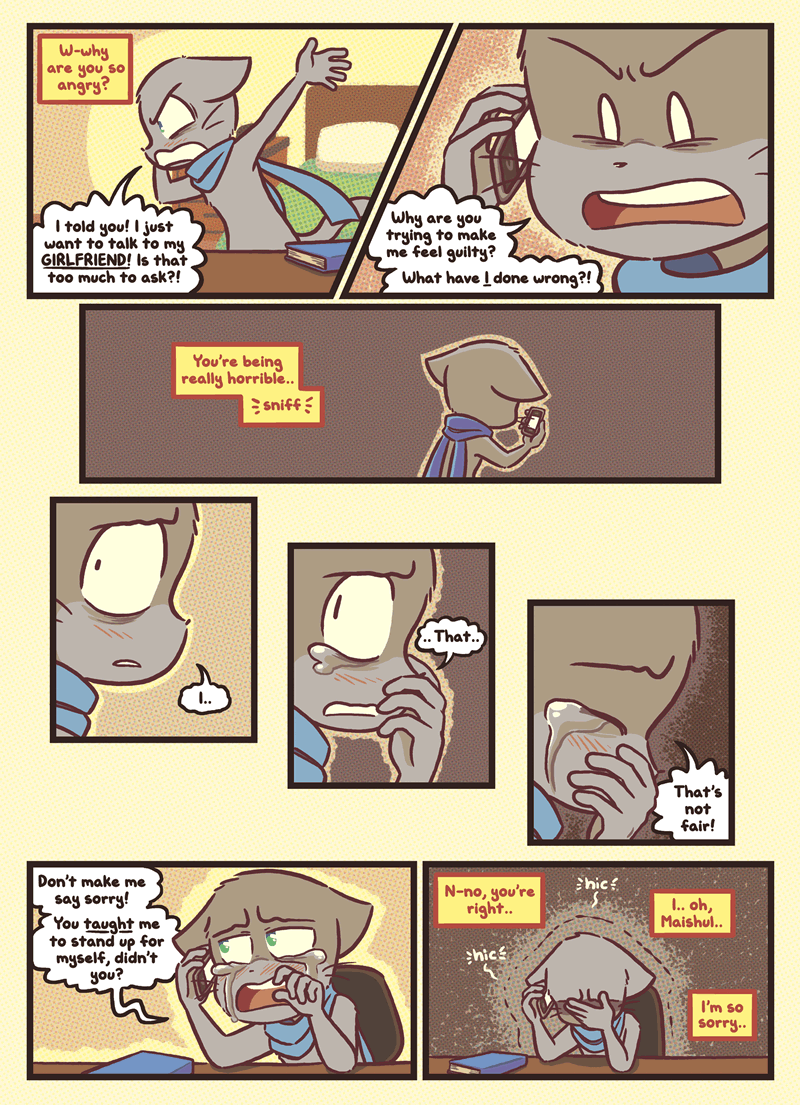 Veronica: oh god this is a mess

Slight guilt tripping there..probably nothing will come of this

"whyd you make me break up with lucy"

Ouch. I'm really wondering if Sandy is living in her own world for not acknowledging what Mike is trying to tell her

So! Mike is not willing to say sorry, Sandy saying that she's sorry. This is interesting, we get to see these two getting a stronger relationship? I'm rooting for a break up, but I'm sure that's not gonna happen.

That means this comic will drag more? I'm super scared to die without seeing how this comic ends.

Like okay, not excusing anything sandy has done, she hasn't been good to mike, she's even acknowledged it a few times. So like, not excusing this but like. Kinda imagine from her perspective at the moment. He calls her repeatedly at 4 am, she's jetlagged she answers and he more or less just starts yelling at her.

AGAIN, not excusing her actions or I guess lack there of lol. But as far as she knows he's been a happy boyfriend, er I guess kinda. But its an interesting thought.

That being said they both def needed this wake up call, and im glad Mike is standing up for himself again like he shoulda been,

While it may not exactly be fair to her, it is for the best. The fact that she is 'off balance' from lack of sleep makes it harder for her to try and turn things around or easily guilt him. If this conversation had been done when she was at 100% then she probably would have been able to easily rebuff him/guilt him. This way at least she is more vulnerable and has her guard down and she's forced to see how bad things are if he is putting his foot down even with the state she is in.

I mean true, cause even if she doesnt 'mean' to guilt him or anything like that the fact she does is bad so its good he's putting his foot down etc.

It's so refreshing when characters finally talk straight to each other. Yes, it's never good to yell but I'm really glad Mike is being pretty level headed here.

Sis really started crying. Girl, the man just wants you to talk to him. He's not asking for your left kidney. I'm glad he caught himself and didn't apologize.

It -is- super early in the morning for her, and she just got woken up by him yelling at her. I don't really blame her, think I'd cry too.

you doing alright there?

It's so refreshing when characters finally talk straight to each other. Yes, it's never good to yell but I'm really glad Mike is being pretty level headed here.

I’m not going to lie, even though he’s not doing it in the best manner, it’s so satisfying to see Mike deal with his frustration head on for once instead of taking it out on everyone around him. Unfortunately, these two have never had a real relationship and tbh I’d really like to see it end and both of them move on.

If this girl making you cry and etc. Let her go. The toxicity of her mindset is pushing her only her agenda onto Mike. How she changed mike to become more like her in a way to tell him to remove people from his life like she doing with her teen life. Sandy don't care, she just a girl that shifting the blame from its from me being busy to me not just wanting a boyfriend. I just want someone to actually LIKE ME TO BOOST MY EGO. She don't want that boy. She wants a puppy. Just crazy man..

Since WHEN did Sandy teach Mike to stand up for himself? By getting rid of Lucy. By excommunicating himself fron his friends.

I mean, she doesn't know the whole story behind Lucy or what is going on with his friend group! But she did tell him (at least on 2 or 3 occasions) to be more assertive. Page 18 of "Just Beautiful" and pages 26-28 in "December". I hope that helps!

I definitely agree with commenters that Sandy’s been manipulative to Mike and behaved very selfishly, but I also heartily disagree that she’s been purposefully trying to isolate him from his friends. Her concern for Mike being treated badly by Lucy was 100% genuine, and she never wanted him to go nuclear on her— SHE’S the one who told Mike to make up with Lucy after Lucy sent her a text and seemed really remorseful, remember? Sandy hasn’t always been so self centered...she’s become increasingly more so over time. I’d imagine that constantly getting her way, being told she’s gorgeous and talented, being rested like a celebrity and very special as a teenager does a number to inflate your ego!

Regardless, she wants Mike to have friends. To be honest, the more friends Mike has the better for her, because it seems pretty clear she’s purposefully avoiding him. Just my two cents. I’m glad Mike is standing his ground here and finally being honest, even though it’s...way too much too late!

Apologizing to your boyfriend after he yells at you at four in the morning? That's not very girlboss of you, Sandy.

Okay so, I love that Mike is finally communicating with Sandy. I love how he isn't backing down and is putting the facts out in the open. However, I can see where Sandy is coming from during this phone call since Mike never really communicated just how unhappy and in pain he is that she is pretty much ghosting him and the times he did text how much he missed her, it was so easy to overlook for her. Mike pretty much went from "backburner boyfriend" to him surprisingly raising his voice at her for the first time in the span of their relationship. 0 to 100, really. That's some whiplash, but she deserves it.

Mike has every right to feel this way. I know him yelling and letting it out the way he is isn't the most tactful approach but it is pretty realistic considering he is a teenager with so many jumbled up emotions at any given point. I mean, sure, this conversation would probably get more out of Sandy dialogue wise if he didn't raise his voice and talked about it more calmly and conversationally but dude has been collecting this pain for a while and refuses to be shoved onto the back burner again. Good for him! If he wasn't snapping, would she have found an opening to end the phone call before he could be open and honest for her? Just saying.

For what it's worth, I don't think Sandy is inherently bad, but she is bad FOR him. The way she treats her boyfriend whom she 'loves' doesn't even breach bare minimum. Originally she just wanted him to stand up to Lucy since Mike obviously didn't like the rough housing Lucy put him through, and after December Sandy even encouraged him that if Lucy wants to get better, for Mike to help her. She said that 'there's nothing wrong with telling someone they upset you'. She didn't want Mike to sever ties with his friend like what he did in December, just for him to stand up for himself because he deserved to be treated better...Like what he is doing now. It's come full circle!

Honestly, surprised they both calmed down and Sandy kinda saw his side/apologized. Still pissed at Mike for blowing up at her with no buildup at 4AM, but if he learns the value of communication, this might be worth it.

I thought Mike was throwing his phone in the thumbnail

This page... hurts.... it's hard seeing these two just break down, seeing Mike basically having to convince Sandy to apologize to her, Sandy having to hear Mike's negative energy so early in the morning. The children are grieving

He's the most unstable teenage boy I've ever seen.