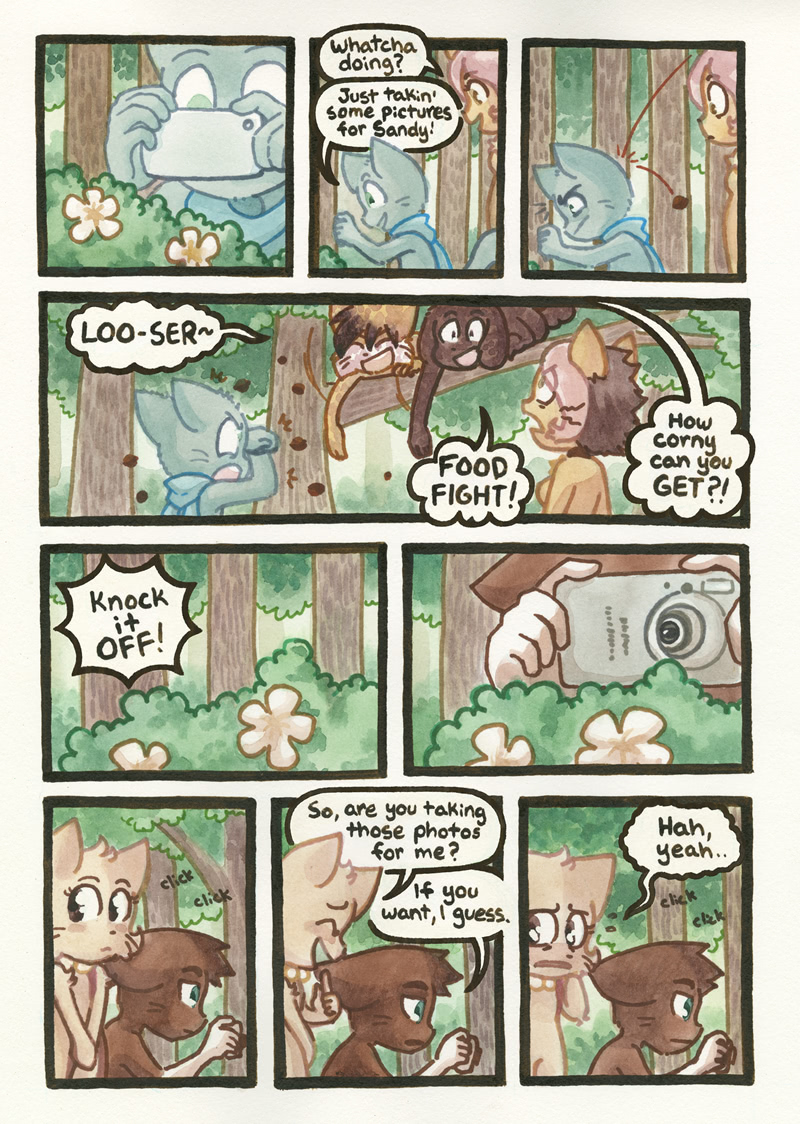 Oliver: Hope you all enjoyed the weekend! Daisy’s enjoying hers.

Here’s my thoughts on the whole situation. Abbey has a right to his feelings and so does Daisy. However, Abbey also has the right to not want to be in a relationship of any kind, including being friends with daisy. From my perspective it looks like daisy is trying to force a relationship to happen even though Abbey has made it clear that he’s not interested just like she did with Mike. As for the idea of love in a relationship, I don’t think you have to be in love to date someone but I do think if over a year later you still don’t love them but they love you it’s time to be done. Also the fact that she doesn’t love Abbey but was willing to give her virginity to him just to prove she’s “not a baby” that says she has messed up priorities and issues. Also abbey is not required to make himself miserable just to make daisy happy and he obviously was miserable knowing daisy didn’t love him back. Daisy is also not required to love him, but that doesn’t mean she gets to decide whether or not they stay together. Any person in a relationship has the right to walk away, even if the other person doesn’t like it. So daisy needs to just accept Abbey doesn’t want to be with her anymore. Finally, I want to point out that if daisy really cared about Abbey, she’d want him to be happy and the fact that she knows he isn’t and is still trying to force a relationship with him says she doesn’t really care about him.

I can understand why Abbey is still frigid. After all, he and Daisy didn’t exactly mend things in a peaceful manner (thanks, Paulo). If anything, Abbey was bullied into taking her back. In front of their classmates, no less. It’s nice Paulo wanted to look out for Daisy, but his method for fixing her broken relationship was way out of line. Publicly shaming Abbey for daring to be mad at Daisy over something that is between the two of them is only going to make things worse. Getting up in his face and basically calling him an ungrateful piece of trash isn’t going to make Daisy’s case look any better. It certainly didn’t help matters that Daisy basically just stood by and allowed this, even when Paulo used Abbey’s deceased mother as ammo. Paulo was so concerned about how Daisy felt, he never took how Abbey felt into consideration.

Honestly, I think they should have stayed broken up. I think after the drunken fiasco, they need a break from being a couple. Daisy more so. I like her, but let’s face it…Daisy is an attention grubber. Not an avid one, but still noticeably so. She’s often overlooked in favor of other girls who may be prettier, more charismatic, or successful. Even though she has her priorities in order, she still craves attention. She can’t feel good about herself, despite her achievements, unless someone is telling her she’s pretty.

Abbey was unintentionally an enabler for this. He came from an abusive household, and would rather die than be anything like his father. Obviously his #1 priority for dating is to be ultra nice to his girlfriend. He lavished Daisy with praise and attention, and that’s probably what she liked most about him in the end. I don’t doubt that she liked him as a person and enjoyed his company, but this was one of the few boys who ever told her she was someone worth pursuing. Being ignored for Lucy and Sandy by the same guy over the years obviously did a number on her self-esteem.

It’s clear she didn’t realize she was unconsciously making Abbey Mike’s stand-in, and it obviously wasn’t her intention to keep him around to stroke her ego. But it really seems as though she only wants him to stay as her boyfriend so she won’t lose the attention and affection from what probably seems like the only decent person who notices her anymore.

I know Daisy wasn’t trying to be mean and likely didn’t intend to sic Paulo on Abbey, but it seems like she’s only forcing this relationship to continue for her own sake.

There isn’t really much proof that Abbey is being cold towards Daisy. I think people should just wait with judging things and see what happens in the next page upload.

Abbey has every right to end the relationship but he shouldn’t be cold to Daisy (even though I don’t find it to really be a big deal since it would be the least negative attitude that he could perform). She has been a very supportive friend for quite some time. Not saying that she has also been a great girlfriend (at least not recently).

It’s amazing how people are really making a big deal out of this especially since there isn’t much proof that Abbey is being cold. But this is BCB comment section so I am not really surprised.

Looking forward for the next page upload