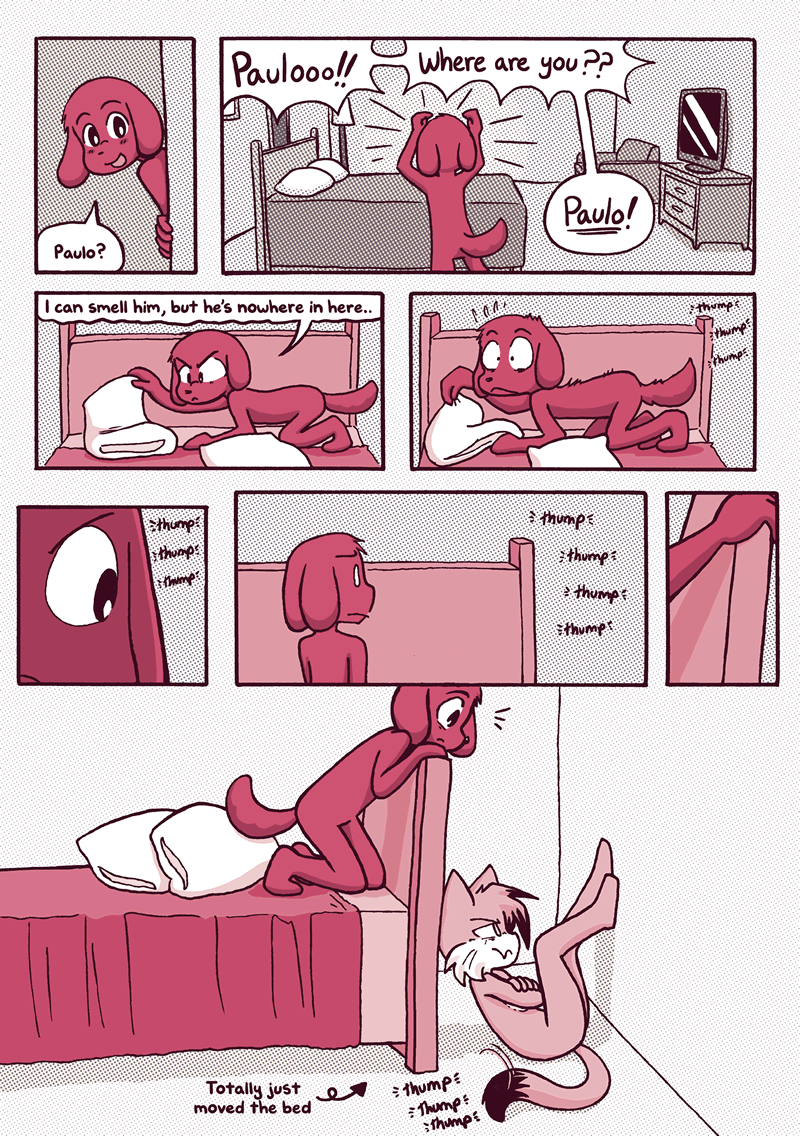 Veronica: One of the toughest pages to do, which one of my closer friends was praising like no other. Whooo.

I now have tears in my eyes. this was the most beautiful panel EVER!!! Both anime and manga included do not hold a candle to this.

Mike is a ninja. That’s the only logical explanation.

It’s been made clear that there’s a river below, and Mike DID promise never to let another drop of water touch her again so… yes, of course he has to (even if only temporary) be a ninja to keep his promise.

Epic! Nice silhouttes! (Is that how you spell it?)

I think this scene could have a Balrog to top things off. Wait, there IS something in the bushes in a few pages! Does that count?

that is officailly my favorite page…nice work!

This page is win.

Taeshi, your friend Neil was right to praise this page. It features so many epic things that I can’t do justice to all of them.

Wait. Wouldn’t that be physically impossible?

Probably, but I forgive Taeshi for it, so should you.

This is a death of Mike we know.

Physically impossible? No, but he’d have to push with a great amount of force, thus sending him downwards much, much faster. Also, GREAT FREAKING JOB! And Mike is now very high up there for me. Awesome job man.

This page gives me goooooooooosebumpsssssss.

Even after the 5th time of reading it.

I’m sure Lucy will punch Mike later for kicking her in the stomach.

@Jelloman He kinda broke that promise when Lucy dived to save Yashy.

dude i can read this chap over and over again and still won’t get tired of it. this is by far the best page!!

I had tears going down my face at this page

I just realized something….HOW IS THIS POSSIBLE!? What? Did he push her through the air, and up to the other side of the bridge?

Every time I see this page I just have to comment that this is ****ing impossible. Even the power of love cannot break the laws of physics like that.

Nicely and interestingly done page, shading them all black was a nice touch.


@jelloman
AHH!! SPLIT INFINITIVE!!! THE PAIN, THE HORROR!!!
*puts self to sleep*

This… is one of the most epic pages EVER.

I really don’t understand. Did he… fall and then grab her, spin upright, and hurl her upwards? This is troll physics.

tehcnically that is possible, if he pushed himself towards her to catch her (which he did), otherwise that is humanly impossible

Troll physics? He pushed off from the rock to get her. He’s got good legs. It’s a plot point.

PHYSICS DON’T APPLY TO THE MIKE!

Vat are hyu talkink about?

Because physics obviously works that way.

What he did was push of the ledge catch her flipped backwards about 90 degrees and kicked off the momentum not only sent Lucy flying back up but assured Mike would hit the water faster and with more force. It’s possible I assure you.

Am I the only one wondering what the heck is Sue doing in that panel?

Taeshi, if you made the part where mickael got Lucy to throw or kick her back up, you could’ve made mike kiss her first then kick her up.

Mike could do that because:
A: He comes from a long line of Korean ninjas, and
B: He then fell into a plot hole.

Every now and then I come back to this particular page for nostalgia’s sake. It’s just so elegant and emotional that you can’t help but love it. This definitely shows Mike’s noble side since he is willing to sacrifice himself for Lucy.

and I just realized there was water all along, I just never saw that it was water, thought just some generic landscape or something (dunno)

This is probably my favourite page so far.

Hang on… they twist the wrong way after they collide…
Michael should’ve went into a frontflip motion, not a backflip. Physics fail!

But yeah, this page is still the best.

Physically impossible, but SHUT UP IT WORKS, DAMNIT.

Hmmmm… Thiz thiz remindz me of a truly painful ztory which involved me, a cliff, a ztupid gofer hole, and a home made ztretcher cuz my family iz cheap/poor

WTF??? that doesn’t make a bit of sense!!! maybe im looking at it wrong…

what would really happen is mike slows lucy’s decent and launches himself further downwards towards the giant river.

keep in mind that i may be just looking at it wrong, as previously mentioned.

You probably don’t even read these comments anyway, focusing on the comments of your newer comics. still, this has been bugging me ever since i read this comic.

i just never commented on it. if I had bothered to scroll down and discover that you can leave comments (which i only found out about around the start of ‘Pillow Talk’) i would have brought up this subject as soon as i read the comic.

At that height, the surface tension of the water would shatter your bones just as well as a concrete wall…YOUR MAISHUL LEARNED NON-CANON!

Actually its possible after reading all your comics I showed this page to my chemistry and physics teacher and she says its possible.

I would never be able to think as fast as Mike did here. There’s just no way.

This Page Is Awesome

This made me teary ;~; One of the best pages out there.

…AND PAULO WILL GET ALL THE CREDIT!

Wait, can you push someone in mid-air? I thought you needed something to ground yourself on.

I was listening to moonlight sonata while reading this…

I’ve just realised. There’s a lot of Sue in this chapter…
…Me gusta

@Hannibal
anything is possible with Mike-san

MIKE!!! Wh-what’s the rest of the gang gonna do if you die? You saved Lucy… at least…

Too bad Mike didn’t die after this… Would have made future events in the comic much better for most of the cast.

@Spiritwolf15 don’t spoil this to the new readers!

Wow, now I realise… when Mike falls it’s not that bad he’s a cat and a good swimmer, but when Lucy falls.. O.O She passed out and can’t swim…….

@Spiritwolf15 I hope this cover’s your commont so that It doesn’t have a spoiler right below the page.

@TheRealLee It’s not even a spoiler. This chapter is a flashback, and we see that Mike is perfectly alive at the beginning of the chapter.

And everyone still hates him? Geez, I’ve read about knights in shining armor, and here HE comes along and everyone HATES!?!? WHAT IS THIS!?!!? Why does everyone seem to team up to destroy all faith in humanity!?
She TERRORIZES HIM! I mean, everyone deserves a second chance and all, but she hates him PERSONALLY every day! She NEEDS him! This page right here is cold hard PROOF that she does! No one would have saved her other than Mike! I mean, Paulo loves her and all, but wouldn’t he just think he would have lost her when she let go? He says in one of the comics that he doesn’t want to die for her!
And STILL you all just keep hating… it’s disgusting to see people like me hating such a brilliant hero… disgusting… like a parasite… like cancer…
And has she done anything for him!? Think about it, has she ACTUALLY ever saved his life? During the gang scene, she’s only defending herself and talking about how big she is and how much see must care about everyone… but they weren’t even going to TOUCH them if they hadn’t intervened! They were only trying to get Lucy, who could have saved herself alone. And when Mike fell into the water, PAULO SAVED THEM! Lucy only failed!
Look, I’m not saying Lucy is some person who is to be hated and all, but seriously, can’t you people see that she’s been bad to Mike all his life, and hasn’t even said sorry? And that Mike has no reason to be hated? Just think about that.
Please.

your ruining the beautiful mood

all of you anti-mike ppl r gonna love this page

proves what i’ve said all along, MIKE IS A BADASS

Dam, you. dam you for making me like Mike and Lucy as a couple.

:3 u can delete this if it pops up, I’m just testing if I can comment

Mike did this because he loves Lucy. This was no babysitting. This was a act of love, even if though he doesn’t realize it himself

I will forever support Mike X Lucy, I don’t care what Mike did in the future….

On the 5. shadow it looks a bit like they kissed

I know that it’s not Lucy’s fault, and ‘Curiosity killed the cat’ and all, but sometimes I just wish she would think rather than just react the way she does sometimes..