Featuring a comprehensive cast list, frequently asked questions and author information, this page will get you up to speed on all things BCB! 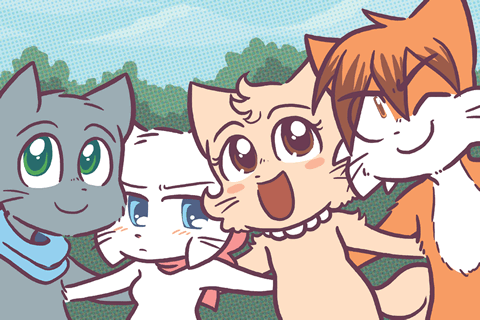 Our male protagonist. A star athlete and regular “nice guy”, Mike often finds that the girls who vie for his attention are the source of most of his problems.

Our female protagonist. Sometimes sweet and sometimes mean, Lucy is wrought with insecurity and would rather punch you in the face than expose it.

Paulo spends more time hitting on girls than paying attention in class. Despite his talent for time-wasting, he is fiercely loyal and will always stand up for his friends.

Smart and hardworking, this bubbly cheerleader spends her time immersed in books. She longs to be more than everybody’s “little sister”.

Chipper and dimwitted David sees the world a little differently from those around him. His distance from the others sometimes yields surprisingly astute observations.

Calm and composed, Augustus is always sure of himself and executes his tasks with quiet efficiency and biting wit. While he keeps his emotions close to his vest, there’s one girl who can unravel everything…

Bound by a strong moral code, Abbey struggles to balance his protective nature with a short temper. While he can butt heads with more easygoing classmates, he’s working on it.

Always busy behind the scenes, Sue’s interest in the dramatic doesn’t necessarily extend to her social life.

Mild-mannered popcorn merchant Amaya is Sue’s best friend. She chooses to remain mute. Her job at the cinema can sometimes be very useful to those who know her!

This peppy sophomore’s life is dominated by school activities — softball, student government, you name it! While she normally keeps to her own group of friends, Jasmine took an immediate liking to Paulo but struggled to find time for him.

Jessica is a proud, quick-witted member of the cheerleading team who is never afraid to voice her opinion. Together with her closest friend Rachel, she has been quick to offer compassion to Daisy.

A true flirt, Rachel revels in playful jokes that make light of those around her. While her open nature is often confronting to friends, her cheerful demeanour always lightens the mood.

A true optimist at heart, Matt always tries to make the best out of every situation. His inclination to be kind has made his friends fiercely protective of him.

Mike’s very own green light on the horizon, Sandy is Mike’s earliest childhood friend and his current love interest. Having found success as a young model, she struggles with the demands of work, school and a budding long-distance relationship.

A rich party girl with a rebellious streak, Tess departed the scorched earth of junior year to find newer, younger friends. She has since struggled to reconcile her upcoming graduation with the close friendships she quickly forged.

Jordan’s a kinda popular kinda short basketball player, and Lucy’s brother. While it’s hard to take him seriously given his serial unrequited crushes, he has a short fuse when it comes to those who slight his little sister.

Madison swears she’s a nice person, but it’s not all that obvious when she’s letting you know about every little thing that annoys her. Jessica, her new girlfriend, finds this adorable.

Abbey’s little sister seems to have an endless reserve of childish positivity, showing strong dedication to schoolwork and her local Girl Scout troop. She loves her brother dearly, and shoulders more of their shared burden than he’d like.

Lucy’s first pet, and the loudest by far. Yashy is something of a prodigy, with a sharp wit that betrays her young age. Bratty, loudmouthed and rude, deep down she wants nothing more than for Mom to settle down with her “Flea”.

Mike’s pet bird Blur was rescued from a fire as a youngster and has trouble remembering what came before the incident. He counts Yashy as a close friend and can often be seen playing or arguing with her.

Innocent and naive, Chirpy remains in awe of the world around her. She clings to Yashy and always does her best to follow the examples of grown-ups (while making frequent mistakes in the process.)

Lucy’s most mature pet, Lily is a source of wisdom for much of the cast (and babysitter to others.) Patient and understanding, she is usually able to steer her friends in the right direction.

Veronica and Oliver live together in New York City. Partners of over ten years, they work full-time on BCB and related projects.

Veronica (AKA “Taeshi”) is the creator, primary writer and artist. Now 35 years old, Bittersweet Candy Bowl is the final realisation of a story she’s developed with characters she’s had floating around in her head since childhood. She has half of a Bachelor of Fine Arts from COFA, half of a Bachelor of Education from UTS and did some psychology classes at Rutgers. Born in Ecuador, raised in New Jersey and having lived in Sydney from 2006–2013, she is a citizen of three countries: Ecuador, the United States and Australia!

Oliver (AKA “SuitCase”, “Souppy”) assists with writing and editing, is in charge of the store and does all the web and print design. On tax forms he writes “manager”. 35 years old and born in Australia, he holds a BA in History and English (USyd) and a JD (UNSW), but has chosen to skip the law career for now and stick to what’s fun.

When is the comic updated?
At 1 PM EST every Monday, Wednesday and Friday.
What does the name “Bittersweet Candy Bowl” mean?
Our friend Lily suggested it. It’s about the intermingling of personalities in the comic! Kind of.
Is this a furry comic?
BCB’s animal characters were influenced by Veronica reading Garfield and watching cartoons as a kid. As we see it, they have nothing to do with furries, “fursonas” or the world of anthropomorphic fetishism. We hope the comic can be enjoyed by all kinds of people, whether they identify as furry or not.
When did the comic start?
Veronica began posting the comic on deviantART in 2006. It launched as a regularly-updating webcomic on a full-fledged website in 2009.
How do you make the comic?
Veronica first writes very loose scripts for key moments on her phone. After thumbnailing with a pen and notebook, Veronica uses a Wacom MobileStudio Pro and Adobe Photoshop to sketch out pages and write the dialogue. Oliver then reads through and edits the pages. After reading through one more time together, Veronica gets to work on the final pages, inking, coloring and shading. Oliver finishes the page with halftones and makes final color corrections before they are uploaded to the site. Each page takes three to eight hours to complete, depending on complexity.
How much of the comic is made in advance?
5–80 pages. We know where the story’s going and how it will end.
When will the comic end?
It’s hard to say, but we’re getting there, aren’t we?
Why does the quality of early pages vary so much?
The comic started out as sketches drawn on cheap lined paper made for deviantART friends. As it became more popular, we spent more time on each page and important chapters were redrawn. If you’re unimpressed with the early chapters, don’t worry: it gets better!
Why does the art style change throughout the comic?
It’s hard to isolate the comic from everything you learn when its update schedule demands most of your drawing time. Since it was inconsistent from the earliest pencil-drawn days, we just ran with it. The comic has been host to several experiments in media and style, and will keep changing until the end.
Did you create all the characters?
No. Tess was created by Lily, McCain by Tim, Carter and Carson by Evan, and Kizuna by Victoria. Fans have created many more characters themselves, but they stay in the fan realm now.
Will you put my character in the comic?
No. Sorry!
Can you come to a comic convention near me?
Hey, maybe! We are mostly interested in attending anime conventions in the USA with high attendance numbers. If you think there’s a good fit for BCB that’s not already in our “Upcoming Appearances” list in the page footer, let Oliver know!
Why do some characters wear clothes and others not?
It’s a comic about cartoon cats.
Who is this black bird from the site’s error pages?
His name is Error. In the early days, when Veronica made a mistake she’d scribble over it, draw a bird, and leave him in the scene.
How can I contact you?
For anything involving the store, BCI, commissions or anything else commercial, email the BCB Store. For personal matters, Veronica’s email and Oliver’s email are the way to go. Direct technical issues towards Oliver, too. Finally: if it’s a general BCB question you’ve got in mind, why not ask us on Tumblr?

Question not answered here? Ask us on the BCB blog.

← Back to the homepage.