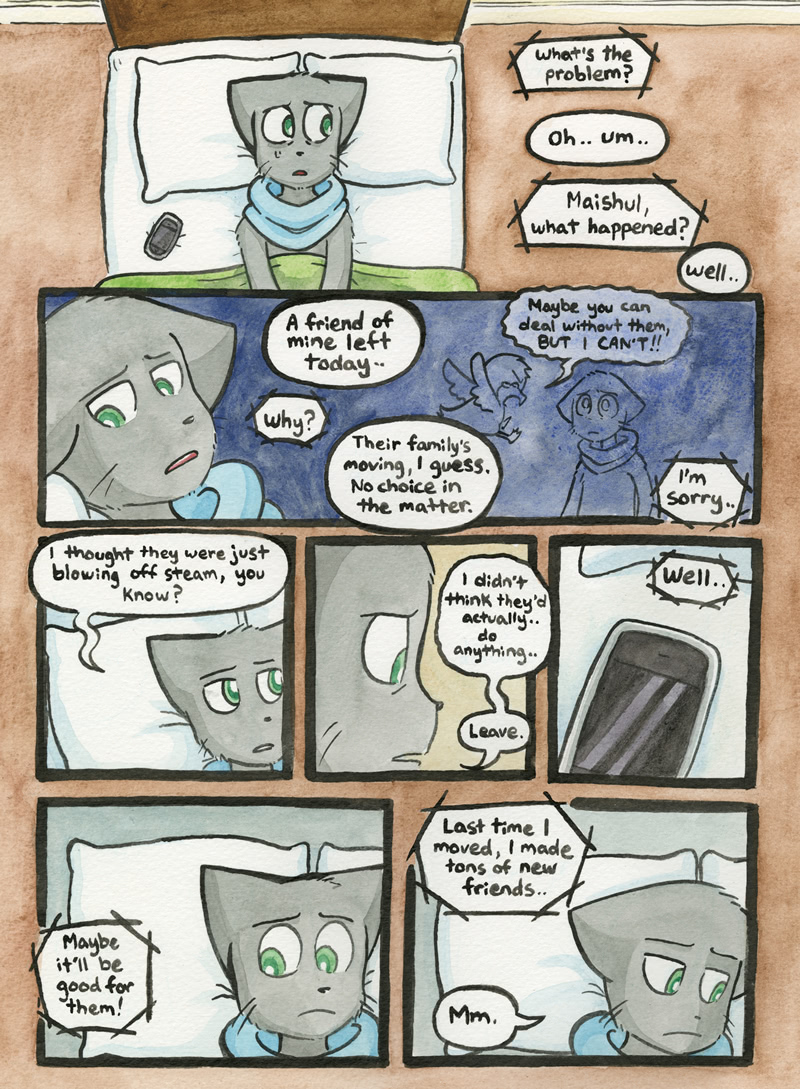 Veronica: BCB’s pets have always been the weirdest little element I left in the comic from its older version. I created them as a child.

Sadly, it looks as if they’ve increasingly become a huge problem for some people that try to get into the story? It’s similar to the whole “But why don’t they wear clothes!?!” question, which seems like an odd obsession to me but is genuinely a big obstacle for certain readers.

So I guess I’m doing something about that. The pets were useful characters and often used in the proto-BCB comics none of you saw, but they quickly became obsolete in this reincarnation. They’re with Lucy now.

Mike is talking about Blur moving. Not Lucy. Blur left to fallow his friends (Lily, Yashy, Chirpy) or as Mike called them “His family.” And he thought that when Blur threw a tantrum over their leaving he was just “Blowing off steam.” I’m only saying this because I read a few comments about how Mike “Lied” when really he hasn’t. It would be nice if he actually was talking about Lucy though.

Lucy didn’t die. Lily said Lucy should be out of the hospital in a week, and I doubt she would lie about that. I guess there’s always a possibility, but it just…that doesn’t seem very characteristic of her. I think Lucy will end up being fine, but she might be sent to live elsewhere…perhaps with the father we’ve never seen?

I really don’t like that the pets are leaving, though. It’s Taeshi’s decision and I’ll respect that, but I really love those little guys.

The saddest thing about this page, contrary to what some people are saying, Mike isn’t lying to Sandy at all. Think about it, when Blur chose to leave (I’m guessing to go with Lucy’s family) he pretty much said that they were his family, not Mike, and that Blur was leaving with his family. Sure Mike’s not being specific, but can you blame him? His pet just turned his back on Mike. It probably hurts to talk about it much (Short answers, limited detail) so he gave an answer that was honest, but wouldn’t require explanation (or that wouldn’t make Sandy worry too much.) The worst part of all of this, Mike’s blaming himself and he’s dealing with his own repressed feelings for Lucy. Not just the romantic ones, but the anger and guilt at the way they treated each other (Anger at Lucy for bullying him; Guilt at himself for bullying back and [in his eyes] cause all of this misery amongst his friends). At this point, anything could happen with him. It just depends on what kind of support he’ll get in the near future. Sandy and Paulo were good, but Mike’s gonna need to confide in someone, and depending on who it is and how they react (Abbey comes to mind as a bad person to confide in for example) Mike could either start to get better or make a drastic negative turn.