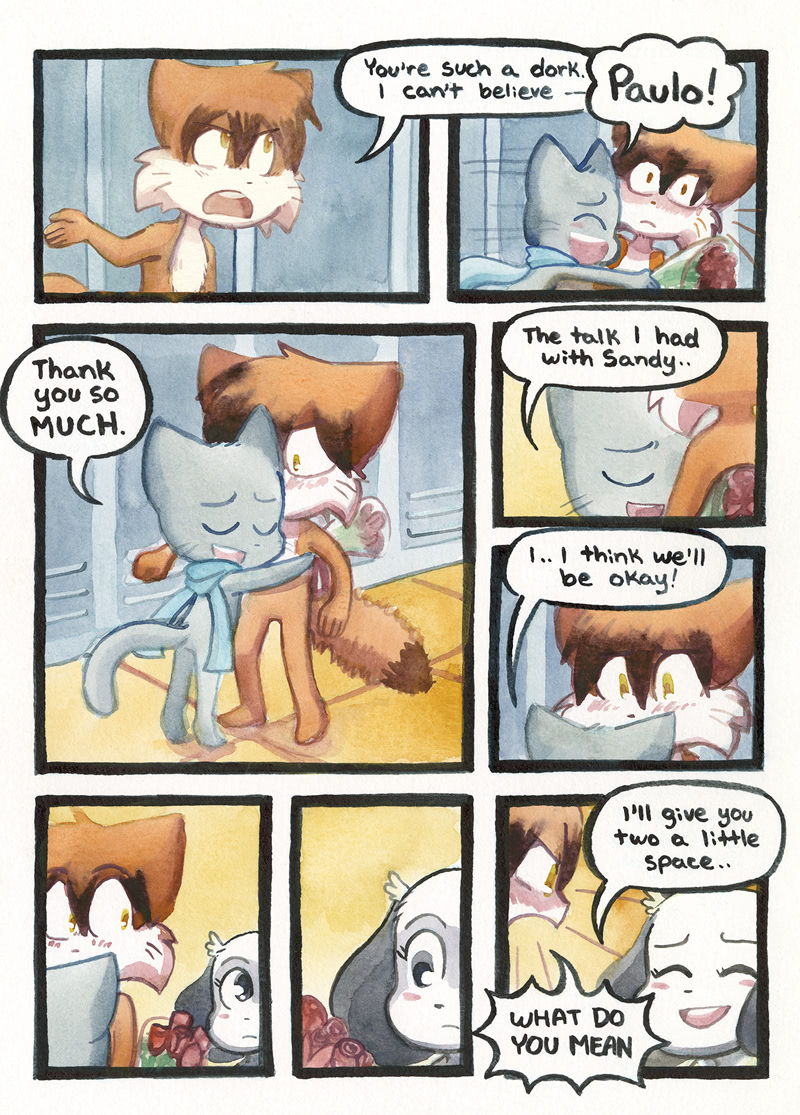 Man, fuck all y’all. This page is way too good to be brought down by bickering and blabbering, so I’m going to gush over EVERYTHING I like about it.

OMG, what was Paulo going to say before he got interrupted, because all I can picture in my head is “I can’t believe I thought I was in love with you.” That HAD to have been implied, right?

Paulo’s expression in the second panel is only matched by Mike’s GINORMOUS smile. Also, Mike should try out for the football team, because his pounce game is something fierce. It would help make up for his size, and based on the way he has to stand on his tiptoes to hug Paulo (which is ADORABLE), the shorty needs it.

I like how tense Paulo’s initial reaction is. He starts out wanting to reject the contact, then as he is given the time to process what is going on, Paulo remembers that this is what his entire crisis was about, and that whether or not he wants to admit it, he does like the feeling of being close to Mike. I’m not sure if his words played a part in this or if they were just concurrent with Paulo accepting the moment, but regardless, it shows progress from the Somali.

Considering Mike’s embrace has been going on for at least 15 seconds, he must be VERY appreciative of Paulo’s support last chapter. I mean, not only did Mike glomp him hardcore, but I can’t remember the last time he was this physically expressive with someone, let alone another guy. It looks like Mike really is that thankful.

And finally, the punch line had me in stitches. Rachel made the most out of that pay off, for sure.

Also, Mike hasn’t opened his eyes in either page, leading me to believe that he has been taken under the wing of Brock from Pokémon. Neat.