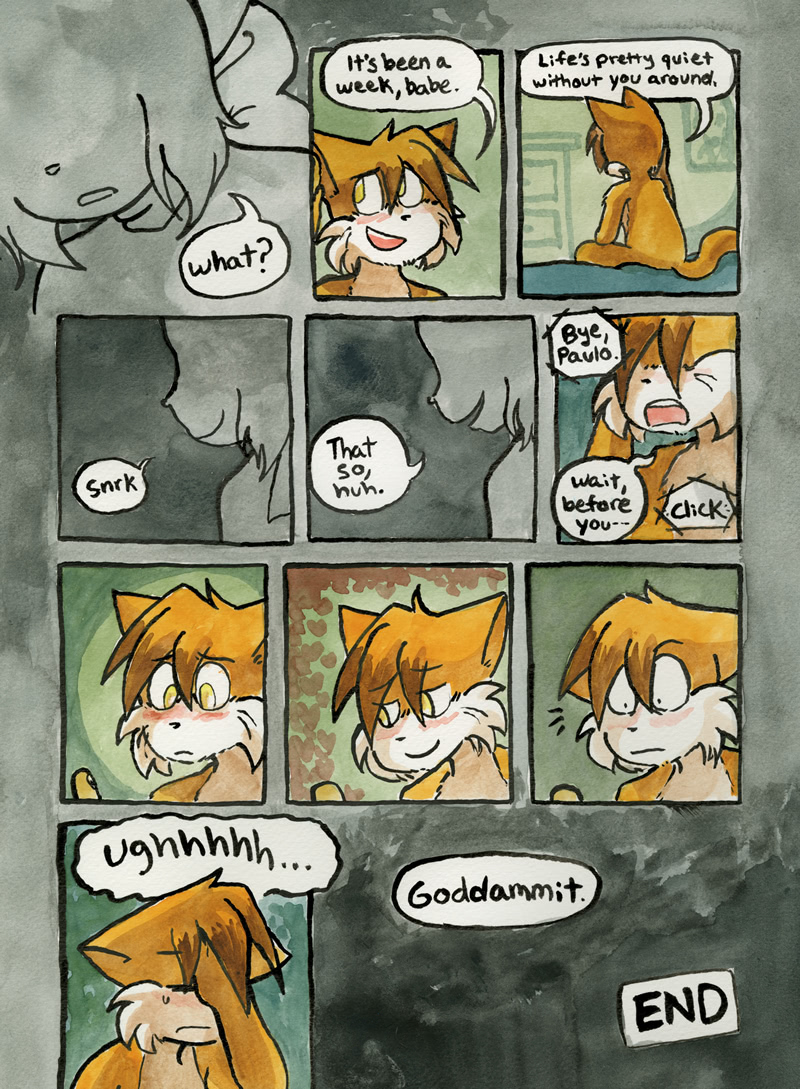 Veronica: Thanks for reading!

I love how Lucy’s sudden return to the world make her thoughts and feelings seem so ambiguous, but it also keeps me on my toes too. I can’t tell if she finally snapped, emotionally, from all of this, or if she finally snapped OUT of her funk (brought to you by Mike). The grey coloring fits Lucy’s state of mind throughout the chapter, so I guess that means she she still hasn’t completely sorted out her feelings yet. Its also kind of chilling (or maybe that’s just me), because you don’t know if her next course of action will be good or bad for her, or how it would affect the people around her. Another awesome thing about the color in this page; it also works as a subtly alarm, it screams “Lucy’s still not 100% okay!”.

Also, I’m curious how this will affect her “relationship” with Agustus. If Lucy continues hanging close to Agustus, then it could create some friction with the gang and Paulo (when he notices, that is, which WILL happen. Given how often he’s thinking and worrying about her, and there’s his internal debate to boot). Mike…. eh, hopefully he won’t care, but that won’t be the case; it’ll be eating him on the inside so bad, and he’ll use it in a future argument against Lucy. Hm…. Maybe this would cause people to lean more towards Mike, if he reveals it that is. So far, only He and Daisy know this. And when the group separates, I think Daisy will either lean more towards Lucy or just try to stay in good terms with both parties (I can actually see this happening). Daisy’s the only one who knows why Lucy approached Agustus in the first place (rather than why she’s still near Agustus), Mike doesn’t. However, her detiorating relationship with Mike kind of motivated her more to seek Agustus’ company. And with this, it kind of feels like Mike’s comment on Lucy being alone could possibly come true now, specially because he can twist this part of the argument any way he wants to. Yikes…..

Some are asking why Lucy had that smile and others think she has a plan. I just see it as her smiling because Paulo is showing some concern. I would smile like that too if someone said something so caring, after my ex-bff told me how worthless I am and how no one could really care about me.

Also I think it ended where it needed to. See the big picture like this, we’ll get more suspense and maybe even the reaction that
we’ve all been waiting for. Besides it would have been boring if Lucy would of just told Paulo what was going on then and there. (Since we all know what would be the obvious result.) Let’s watch things play out for awhile longer and see what we get. =D

But still, cheating is wrong, and we all know how much of a douche you can be, but even YOU wouldn’t stoop that low. You may be in a loving relationship with Jaz, but is it really love, or is it satisfaction. Paulo… before you meet Lucy, you were the sweetest guy in the entire school, hows about we see some more of that Nice Guy Paulo, and just be honest with yourself and Jazmine. I mean, It’s pretty obvious what you’re REALLY after, and we all know it isn’t Jazmine… its someone else, someone who has been in your life for the longest, someone who cares about you, someone… who loves you… Paulo, don’ mess this up again…