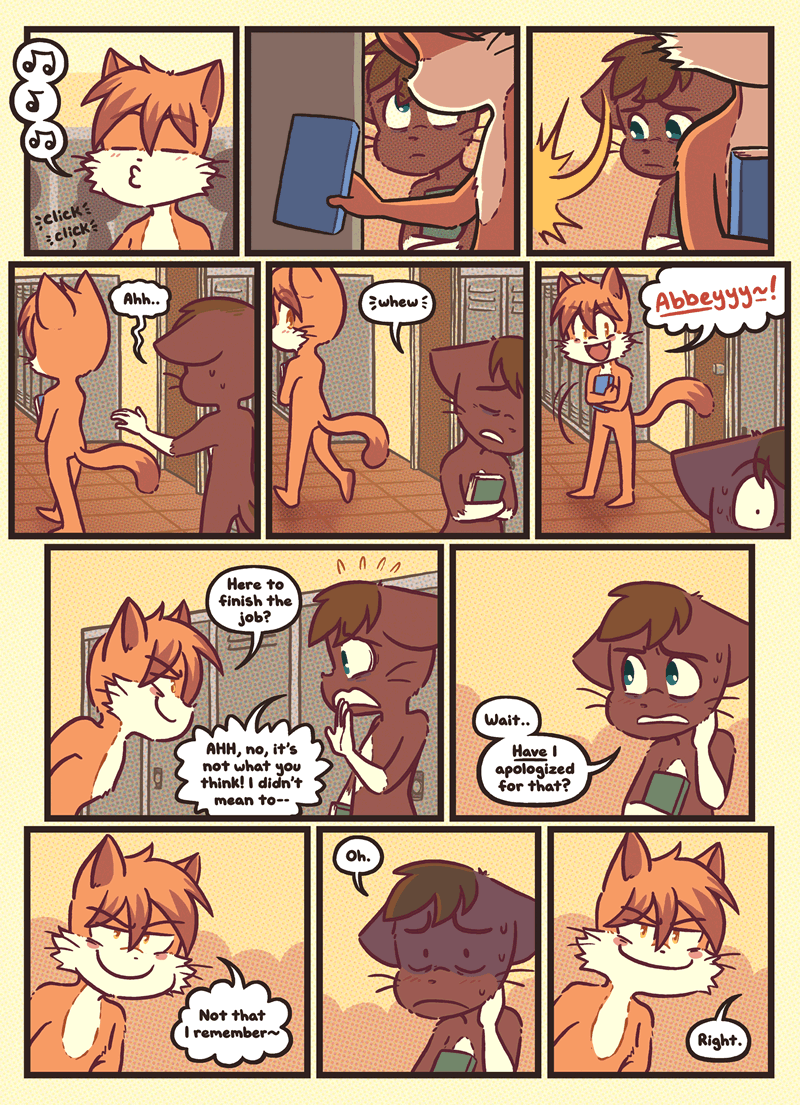 Veronica: The fact the first few panels are a parallel to “Guest of Honor” caused Souppy to double-take and assume Paulo is peeing into the locker. HE’S NOT PEEING INTO THE LOCKER, YOU GUYS. HE’S UNLOCKING THE LOCKER TO PICK UP HIS BOOK, OKAY. HE’S NOT COMPLETELY UTTERLY MIMICKING THAT SEQUENCE.

“Here to finish the job” makes me laugh, Paulo makes jokes about traumatic events to cope

Oliver: You remember the panel! You tell me I’m wrong!

ARE WE FINALLY GETTING AN APOLOGY??

Ksjkdslfjdskhfakdljf fucking smug-ass Paulo, at least he's acting awesome and approachable to Abbey! Lmao U CAN DO IT ABBEY time to put those social skills to good use!! I think things can work out for good now :3

he as in both of them actually lmao. I am just a big fan of the antics of this page

This is flirting. I’m going to combust

I don’t think I’ve actually actively shipped anything (like, I’ve been into certain pairings but I wouldn’t say I *shipped* them? Idk) until now but man, the sauce on this one

Paulo you flirty shit turn it down a notch

Paulo is SO smug!! Gosh I love him haha

Paulo about to come in with that forgive and forget power. Gawd I hope he and Abbey can get a fresh start. I think them combining their views on stuff will make them both better people. Paulo can gain some respectful restraint/boundaries and Abbey can learn how to view things from more perspectives ❤️

It’s really comforting to see Abby’s evolution from a sexist jerk to a friendly neurotic. (Sexist as in thinking girls are in need of protection, not the cad sort.)

Oh my godddd I love Paulo so much, so sassy

Abbey: Please stop staring at me like that, you’re scaring me.

Aaaah I love this. I know Paulo is acting like a smug lil shit but I think if he really believes Abbey to be genuine, it's gunna be really sweet. Paulo is like the only emotionally mature child in the group and I love him

Man that one was a while ago, but I can't imagine Paulo ever forgetting it.

Ah, the unmitigated joy of having the moral high ground.

Ew. I normally like Paulo but I don’t remember~ him ever apologising for that year or so of bullying Abbey, literally using him as a footstool in class. Boy, just ‘cause Abbey royally screwed up in attacking you doesn’t mean you have the unmitigated moral high ground.

I mean, it’s good for Abbey to be forced to be humbled in this situation. Just… Paulo’s reaction feels icky to me after he bullied the guy for a year or so. Maybe Abbey can trigger some character development on that.