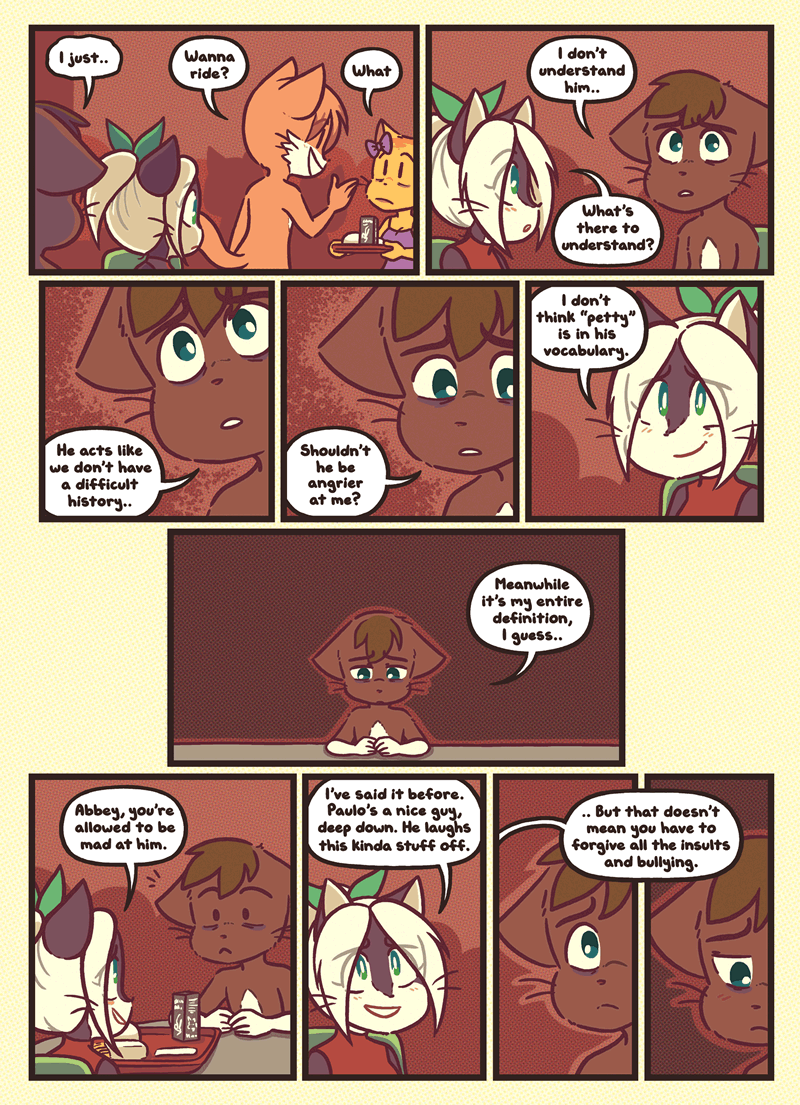 Veronica: Paulo offering Stacy the trip of a lifetime

Anyway, poor Abbey. I’m sure we’ve all had people in our lives who wanted things to stay as water under the bridge but you’re.. not really ready for that. Maybe ever. Maybe not yet.

Does'nt have no, should he try to let go at least and make peace yeah would be healthier for them both at this point, Jasmine.

wait what changed about her hair? ????

@prismabunny she used to have a bun with the hairpin sticks

ohhhh yeah I remember that. ty!

This is something Abby needs to hear. She's right, his feeling are valid. After him and Paulo talked outside the principals office he seems to have been defused. No longer a ticking time bomb. I think Jaz has been a great influence on him. She's surprisingly wise.

wait what changed about her hair? 👁👁

Jasmine is seriously the best. I’m so happy whenever she gets screen time. She is so mature and thoughtful, and I agree with everything she’s saying here!

I think Abbey's remorse is two-fold here. He definitely knows he doesn't HAVE to forgive Paulo for all the insults and taunts... but Paulo's ability to move on seems to bring the same desire out in Abbey. And I think Abbey also realizes that HE would not necessarily forgive himself for the vitriol/physical violence he subjected Paulo to, if he were in Paulo's position. A rough conundrum for sure! But maybe it wouldn't hurt to talk it out...?

Abbey and jasmine are my OTP

I mean i don’t excuse Paulo’s behavior but Abbey took it way to far with assaulting him the one time he actually tried to be nice and do something nice for Daisy. If Abby had attacked him just based on the bullying then fine i guess. But he attacked him and pitted Daisy against someone who she’s known for years and accused her of being a slut. And accused Paulo of wanting to hurt her. So YES ABBEY MAYBE YOU SHOULD GO APOLOGIZE TO PAULO.

I'm glad Jasmine is there to give that insight. Just because someone is nice sometimes doesn't mean you have to forgive them for so much mistreatment. Paulo wasn't very nice at all to Abbey for most of the comic so it's understandable and okay for Abbey to not like him.

What wasn't okay was Abbey trying to villainize Paulo, despite his growth. But then there's the fact that Abbey didn't really get to see that growth until recently, because of partially refusing to and also because he wasn't around for those intimate conversations that showed Paulo's growth to us and other characters.

I guess it's pretty similar to Mike and Lucy, but Mike actually had insight into Lucy's changes/growth before she left, just refused to see/acknowledge it.

Abbey: Why would I want to forgive him?

Is the page not working for anyone else or is it just me?

Not just you, it's broken for me too