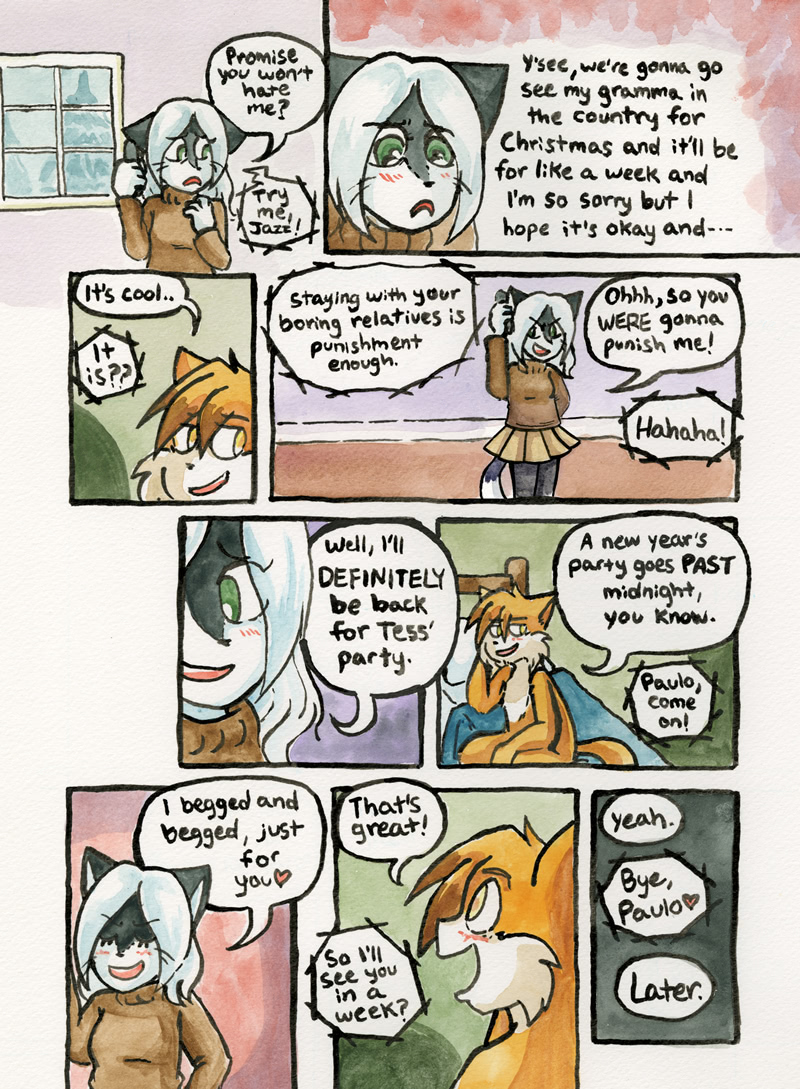 Some people hate Jasmine. Why was that again? Since my fellows here haven’t even noticed his sleeping around habits stop the moment he gets very involved with a girl, how can the readers all be expected to see her development?

I’m liking them as a couple more and more with every page. If they break up it will need a lot of explanations. More than just Paulo having typical 15 year old boy feelings for another female he is close to. I mean really, doesn’t anyone remember what it’s like being a 15 year old? Specifically the males out there? I know when I was around that age I was in a similar situation as Paulo (A girlfriend that I loved very much, but other girls that I was really good friends with) and yeah, I had battles between my upper and lower brains (didn’t help that my girlfriend lived 5 hours away) but I got past it, grew up a little, and I’m still with my girlfriend now.

And no, I don’t think Paulo’s feelings for Lucy are strictly sexual. I know he loves her in a sisterly way, but the first few pages of the chapter told me that his lower brain is still doing some of the thinking. (Maybe more than some)

Also to Taeshi, I just got finished reading this and you have me absolutely hooked. I’m really liking the watercolor, it’s very fitting I think. I’m not sure what it is, but it just adds a sense of calm that nicely balanced the emotional trainwreck that this comic is (I mean emotional trainwreck in the best possible ways)

Okay.
Looks like Paulo isn’t going to get any answers about Lucy until she comes out of the house, since her brother is absolutely set on blocking him.
Jazz and Paulo still seem very friendly towards each other without acting all stiff about it, so there is still potential there.
It’s clear Paulo is concerned, as I suppose most readers are curious, about how Lucy is doing. However, unless he is extremely desperate to find out, I think Paulo will wait it out a bit to see what happens.
As for Mike, I see him in the background for the moment. Paulo is worried about Lucy, but I don’t see Mike popping up in Paulo’s worries. Paulo seems to be specifically worried about Lucy’s, as always, emotional condition.
Also, Mike is kind of lost in his own happy world with the return of Sandy. He seems oblivious to everything else, which is probably most evident in his rather unsound and derogatory treatment of Lucy, as of late.
Being personal here, I get the feeling Mike thinks too much of himself. If he could just step back a bit and stop holding onto himself every five seconds, maybe he’ll realize the damage he’s done and the monster, in the eyes of Lucy and most likely that of other readers, he’s become.