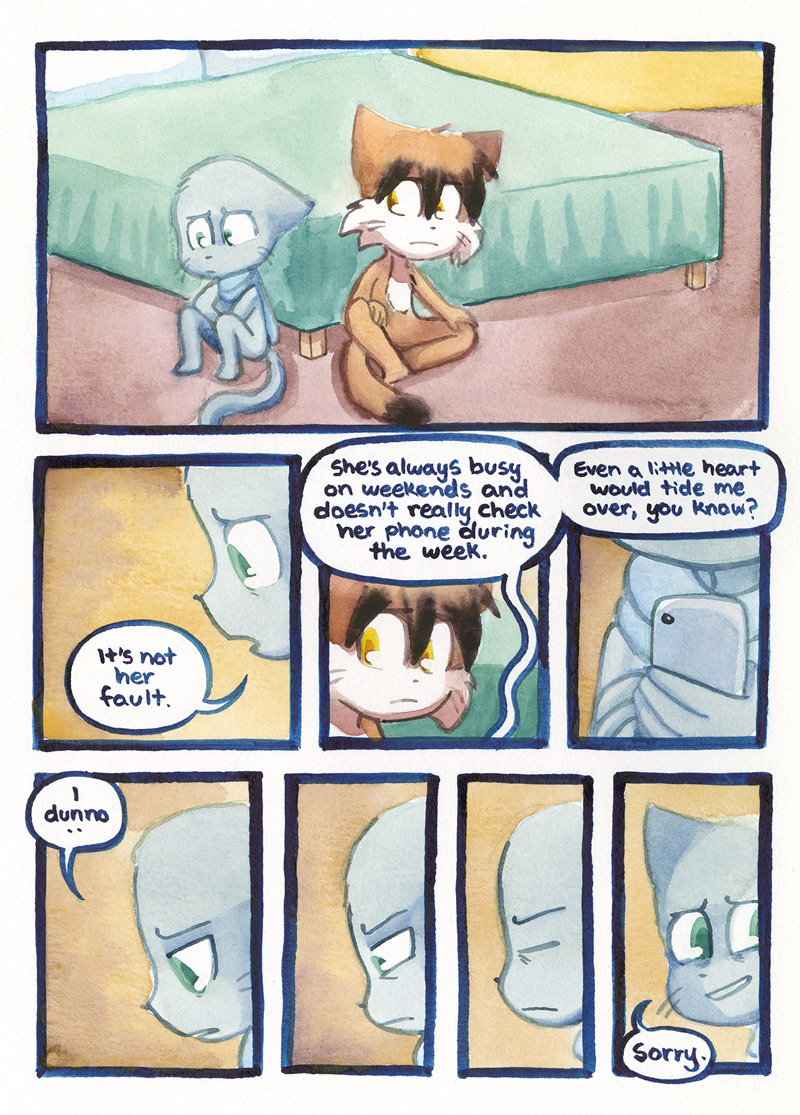 Veronica: I like the weird defensive aspect of Mike where he tries to bottle himself up by looking grumpy or rubbing his temples. It’s kind of cute even though that usually involves him screaming and breaking the hearts of khao manees

Poor Mike. By this point, it’s clear that his feelings for Sandy were genuine from the start and are still very strong. In fact, this page makes it obvious how devastated he would be if something happened to her.

I don’t think he’s angry at anyone in particular during those bottom panels, just at how unfair his current situation is. After all, if Sandy lived nearby, Mike could at least make an effort to see what is going on, but since he’s in a long-distance relationship, he can’t do much of anything.

I’m really liking where this is heading. I mean, December was going in a similar direction before it went south, but I believe something good will result from this. Also, I’m sure that Mike is saying all of this to get it off his chest, but it does show a level of trust we don’t usually associate between the two, so that’s nice to see.

I’m in the camp that believes they COULD become romantically-involved, but realistically, I’d just like to see them become better friends. Besides a small rivalry and some playful teasing, the two have kept their distance from each other for most of the comic’s history, and I for one would be glad to see that change. Hopefully Paulo will respond with an “It’s cool,” and keep this momentum going.

Or how about a Mike and Paulo road trip? By my calculations, we have about enough pages for them plan it all out, travel to Sandy’s, see her cheating on Mike, and watch Paulo comfort Mike through his tragic heartbreak. Sounds like a lot of fun, doesn’t it?

FORGIVE HIM WITH YOUR STRONG ARMS AND SOFT LIPS

For those confused about why Mike is opening up to Paulo, sometimes the person you open up to is the most convenient. In this instant, Mike is so preoccupied with wanting a text from Sandy, that he gave Paulo an opening to ask what was up. That simple gesture helped him open up, and allowed him to start pouring open some of the feelings he’s been bottling up. It’s hard being in a long distance relationship, and sometimes you’ll take any ear that will listen when it’s at one of its hardest points.