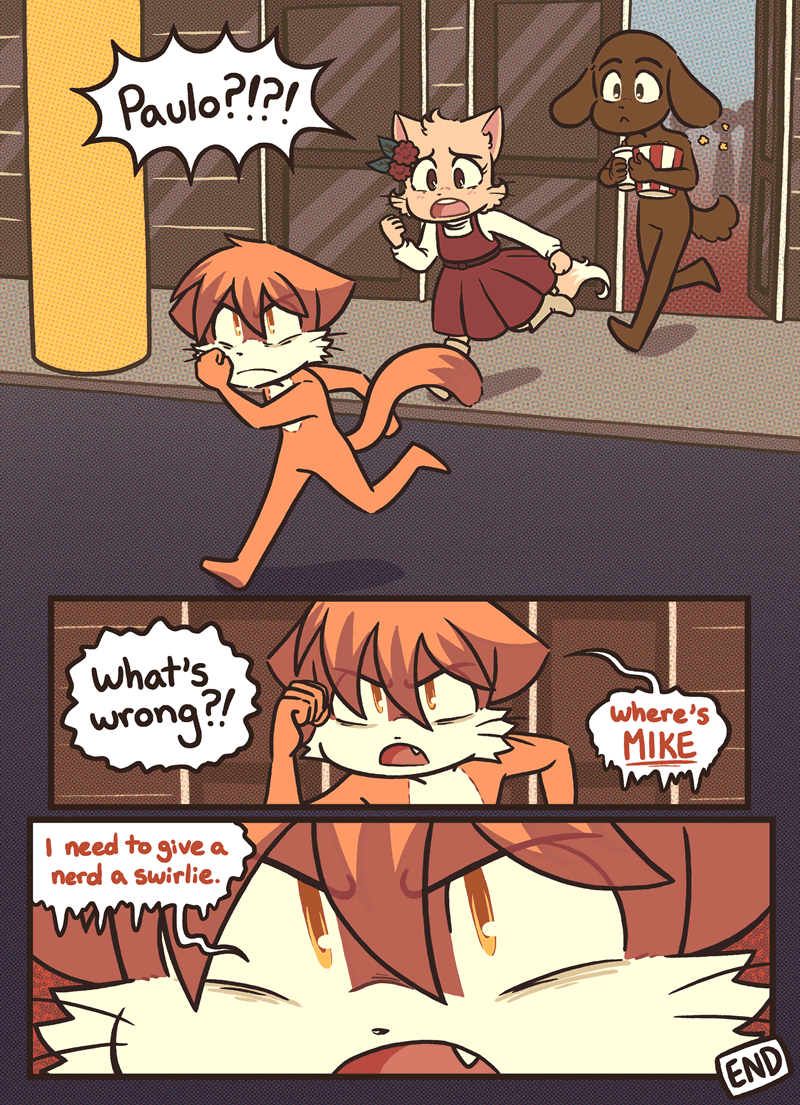 Veronica: And that’s the end of that!! Thank you everyone for reading!!

And now I can reveal that this chapter was actually inspired by my friend’s anecdote! He and a friend watched an anime dub in a cinema.. so just replace Paulo-Daisy-David with two guys having a nonromantic date and you basically got the story! Daisy dropping spaghetti is ORIGINAL CONTENT because all I do is write ROMANCE. I wonder if I need to pay royalties for this one…

Well atleast he isn't taking his frustration out on strangers?

HES GOT ME WHEEZING

Welp that was a little anticlimactic

im confused at what just happened? whys he suddenly talking about mike?

Mike is the definition of a nerd.

Makes perfect sense to beat up Mike, he is the ultimate nerd.

LMFAO WHAT that caught me off guard

Love the mislead. "I'm going to fight to get the dub back on!" No, screw that. I need to beat up my nerdy friend because nerds ruined my day

oh damn. i thought he was going to play hero & daisy would lose her mind 😭

"There goes my hero"

Well, this was..abrupt, weird end to an otherwise good arc

I think the wrong page was uploaded perhaps?

Just all that build up, and....nothing? David just comes back, there is no finality, no pay off, nothing happened. It cuts from the rising action to a shoot the shaggy dog ending

Oh no, this is the last page of the chapter

...Uh, I think the wrong page was uploaded? I had to go back and check if I'd Patreon notifications had messed up and I'd missed a page or few.... 😣😵

I am actually very happy he didn't start a fight in the movie theater and got himself arrested.

I think this might be one of those genuine times where no one quite 'got' this arc ending.

From what I could tell (and I could easily be wrong) it seems like Paulo is acting like him and Michael are cool so he is going to bully him like he used to OR (more likely IMO) he is going after Micheal with pent up anger for everything that happened and justifying it with his frustration from the theater, could be wrong though, and I don't mind if I am. I'm just worried he still thinks Michael is a friend when Michael seemingly just wants to start cutting ties for what he did so either way, this could end poorly

My theory is that the dyslexiac grey kitty reminded Paulo of how much of a doormat Mike is and that the root of a majority of his problems are from the fact that he doesn’t stand up for himself even when he had every right to not be treated so badly by other people. Just like how Dyslexiac kitty has every right to be angry and have an outrage but instead she silently pardons herself and lets the circumstances be. (I don’t blame her in this situation though, these damn nerds would probably riot) Mike has a bad habit of doing this. though.

That, and, while Paulo and Mike may be on better terms now that Mike finally stood up for himself and isn’t putting up with Sandys obvious ghosting BS..I feel that Paulo is still owed a BIG apology. He’s been warning Mike this whole time that his relationship with Sandy isn’t healthy and Mike doesn’t deserve to be treated like that. Paulo has been trying to look out for Mike but literally every time he tried to help him he was given some snippy excuses or aggressive pushbacks. He was never given a ‘thank you’ nor an ‘apology’ for all the shit he tried to help Mike with. (other than the one time Mike hugged him when he got flowers from Sandy)

So, I THINK that might be the direction the comic is going for? Otherwise I have no idea why Mike would suddenly brought up :O