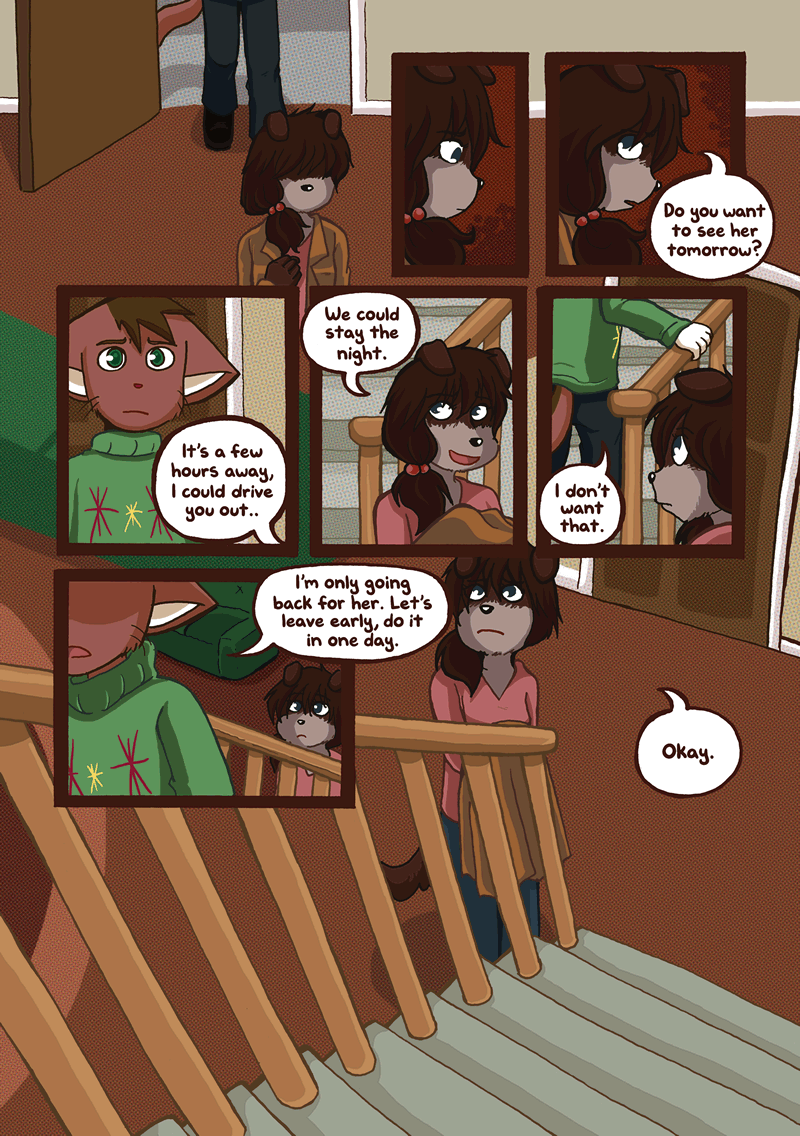 Oliver: That solemn face of Abbey’s!

Abbey is rather interesting. He might bring himself to confront his father at some point though, he should. Not to say it’s easy, but he wouldn’t be doing himself a favour continuing with his plan of only meeting his mother; you can’t just confront one part of your past. Maybe one step at a time, but life comes back at you, and sometimes not as bad as you would think.

Mmmm thank God for some happy news!!! The stairs are looking super fine Taeshi! Any clues as to what he doesn’t want? Why not stay the night?

Here’s a thought though.. I know I wouldn’t want to.. But what about his father? He’s a jerk but I agree with the above! He can’t just avoid seeing his father. It will happen eventually. Maybe not in this chapter though…

I can see why he might not exactly want to see her but still want to at the same time.

It’s the same with me (sort of). I met my mother for the first time last year in March. I really wanted to meet this strange person that was an object of fixation for me as I grew up. Wondering where she was, what she looked like, what kind of person she was. Abbey, knew most of this already though. But it’s the rest of it that makes me really understand.

Once I found her, it dawned on me that she never once tried to find me. She had the resources to do so. However, growing up, I did not have the same for her. So, I found myself asking. Why? Why had she not come to find me? To see me at all? Or at least call?

So last March as my sister drove me to our mother’s house, (I had also just met all the siblings on my mother’s side. I had traveled to meet them all. I had met them all a year before and got to call them and stuff. -yes, my mother didn’t ever call me during this time once contact had been established- ) So yes, I finally arrived at my mothers house.

I wanted to leave even before I walked through the door. What was I doing? She didn’t care about me. The proof was the lack of contact from her.

He probably feels abandoned by her and is keeping himself distanced from it while also taking care of this for his little sister.

Sorry for the wall of text but I had to explain where my own thoughts came from!!! >.