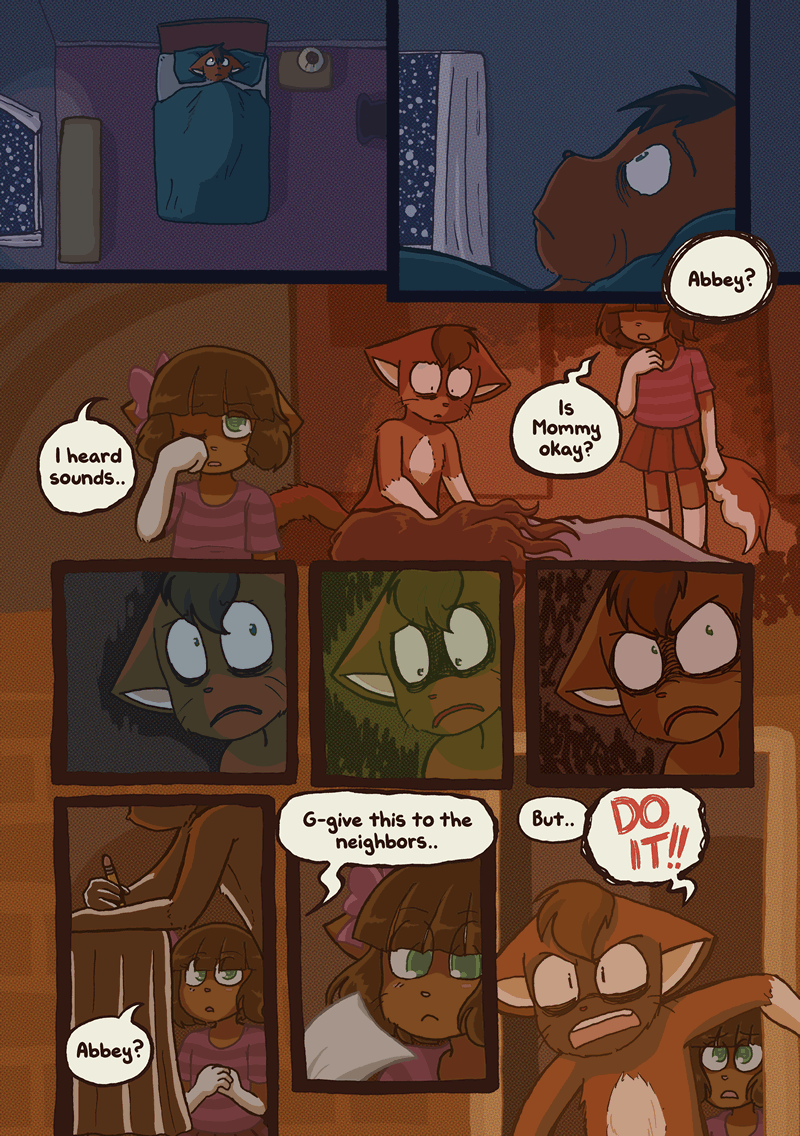 Veronica: abbey shut off that brain for like a minute man it must be giving you a headache

Abbey seems to be getting very upset lately, and frankly it makes me upset too. Taeshi the expressions you give these characters and the situations you put them through are so amazing, I can feel everything that they are feeling (cough*ExceptForMikeWho’sBeingAStupidJerk! *cough) thank you for making this comic so amazing

What a roller coaster you lead us on, Taeshi.

Having to walk around, live every day life, talk to people kindly and pretend like you’re a normal person, when you carry that inside of you….

That would ruin me. I wouldn’t be able to do that.

I’ve always admired Abbey as someone who didn’t take that crap that we all see happen all around us. Now I know why, and my respect for Abbey has increased tenfold.

Abbey seems to jump back and forth a lot. And I don’t entirely mean from past to present and back again. >.<

In some pages it’s almost like he feels himself to be weak. Unable to save his mother. Afraid of his own anger and ability to control it.

Yet, I also see a lot of strength in him. Though he’s angry in this flashback, he’s clearly getting help, starting to solve this problem that their mother can not. I’m assuming those neighbors are going to get help immediately to get them out of there. This was probably the turning point in not only their lives, but his personality.

I hope, that as the story continues to unfold, that Abbey can see his own strength. Naturally that doesn’t mean everything will turn out alright. But he’s shown signs of being a fighter. As with all fighters, he’ll have his wounds though. But luckily, he has Daisy there to patch him up and stand by his side.

I’m rooting for Abbey to get through this! :3

P.S. Sorry if my thoughts seem like they’re all over the place. I’m half asleep. >.<