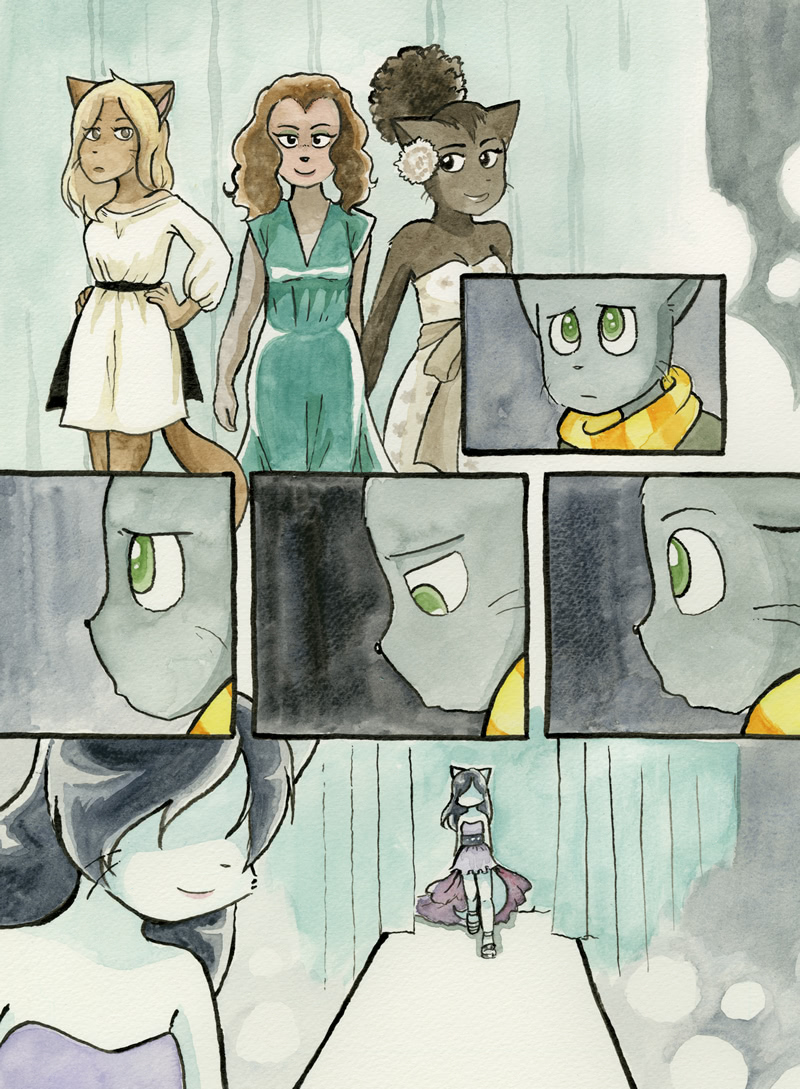 Veronica: Not these girls, either!

I had a lot of fun designing the models and looking up outfits they could wear. I like the one on the right the most.

But enough about them, who’s that..

She sees Mike, stares at him and smiles and they have this deep eye to eye connection,
then she trips and falls.

God Mike! She’ll be onstage eventually no need to fall into a spiraling depression about ugh

Aaaanyway new topic such as why so many people have to hate on Sandy so much. I agree with a lot of the points made here, it was Mike who had to take the whole “Souless Douchebag” approach here and yes I understand Lucy can be a bit of a bitch but I mean really? Not a shred of regret? Honestly I could forgive him if he even acknowledged it but the second Sandy texted he pranced off like a schoolgirl and didn’t even react afterward…..dafuq?

Ah well what can ya do, I trust Taeshi and she’ll make this story awesome no matter what

But back on to Sandy, I wouldn’t really call her full blown Mary Sue more of just an underdeveloped character I mean we’ve only had about 1o-15 pages out of aaaaaaaaall of BCB we don’t know enough about her to analyze much. I just want to know more about her and what in the world could possibly make her want a relationship with Mike? And no I’m not gonna say it’s because he’s a jerk (He is a jerk though

) just what drives a girl to actually call what they have a relationship? They haven’t seen each other in yeaaaars and they were in gradeschool when they last met, it’s not like they even started a REAL relationship physically because that can be labeled as a schoolyard crush. Argh I wanna know!

Ugh whatever anyway as a final note , does anyone else fine the eyeless shaded smile really creepy or just plain foreboding?

1) (my comment on this page) Sandy looks a little young to be in this. From what I’ve seen, all the other models have been adults. Maybe the designer released a “teen” line of clothing with his collection? I really like her dress, and if it were real I’d certainly buy it.

2) (other stuff) I really want Lucy to have a one-on-one with Sandy… Maybe she’d feel better if she found out how nice Sandy really was. (or if she’s truly evil?) I know deep down Lucy still probably wants the best for Mike, and it might help her move along if she was on better terms with her… Or she’d be able to vent her anger if Sandy really is manipulating him.

3) Paulo needs to choose Lucy or Jazz once and for all. If he leaves Jazz, then he’ll be losing his comfort zone; where he can just ignore his troubles and have that ideal high-school romance (I think Jazz will be able to handle it, she’s a stong girl.) Also, even Paulo might not be able to help Lucy so it might be for naught. She needs to adjust to a life without Mike before she seeps back into reality land… I think she’s still trying to identify herself with him out of the picture. Though, if Paulo can help her, I’d really want him to do everything in his power to cheer her up.

4) I wonder how Abbey and Daisy are going to feel when they find out what’s going on. They’re probably the only main characters (discounting Tess) that haven’t been dragged into Mike and Lucy’s “black hole of anguish”… even if Mike is having the time of his life RIGHT NOW, he’s still going to have to deal with Paulo when his spaceship lands. A part of me doesn’t WANT them to know. They have a pretty strong romance going on, and nobody seems to be threatening that (It adds… balance to the story.) So, I don’t want them to be effected badly… but I’d still like to see “outside opinions” from the actual BCB characters.

needs to do something. Augustus has the potential to really influence this story for better or worse. Since Lucy remembered his advice about “watching from afar”, maybe he’d be able to help her in other ways? Not to mention how he seems to have a talent for inserting himself into situations and fricking stuff up. I want to see it.

6) How are the pets doing? With Lucy’s current attitude I wonder how she’s been dealing with them… They seemed okay when Paulo came to visit, but I doubt she’s feeling well enough to give them any sort of affection.

I suppose that’s all I’ve really got to say ATM. Friday update, please shine some light on the BCB universe.