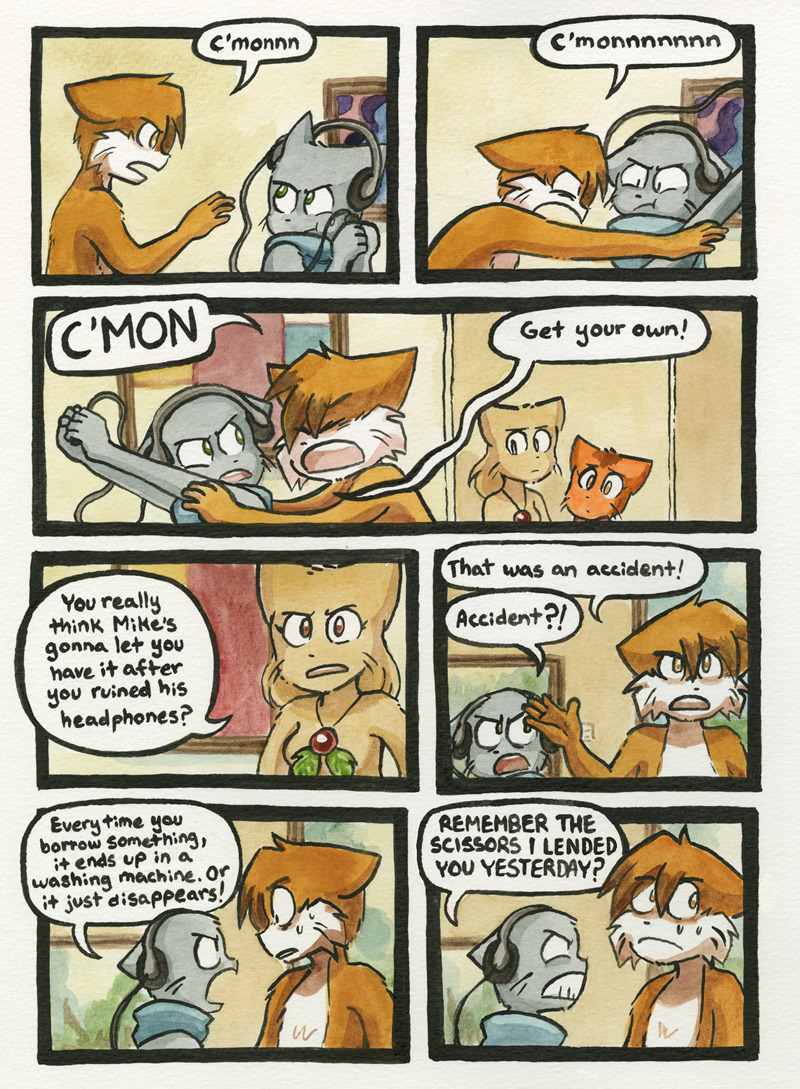 Veronica: Paulo can’t really complain about getting his stereo back from David tbh

I think to spend even more time on characters feeling sad about Lucy would make the comic tedious. I suggest you re-read the last few chapters if you feel it was ignored… I thought it was done well.

I made a reference to “Where’s Poochy?” a few pages back. That’s not good writing, because it’s not how real people act.

I kind of like that Mike’s standing up for himself a bit more now. Not in a jerk way, just in an, “I’m not going to be a doormat to anyone anymore” type of way. I think that will be better for him in the long run, instead of bottling it up like he did for Lucy all that time.

I don’t think it’s strange at all that they’re not spending every chapter mourning over Lucy - that’s not to say that they’ve forgotten about her, rather that life goes on and they have a lot of things going on in their lives. For the readers of the comic I suppose a lot of things revolve around Lucy because she has been one of the main focuses of the comic for a long time and one of the most deeply explored characters - if not THE most. The characters do have lives aside from her though - it doesn’t mean they don’t care anymore, but they’re not going to spend every waking moment whining amongst themselves because she’s gone. What can they even do about it anyway? What more is there for them to talk about and why would they wreck the mood just to bring it up over and over? I’m sure they do talk about her and think about her, the comic just doesn’t bring it up all the time because it would be a waste of pages simply relaying the same stuff over and over again and allowing things to quickly stagnate.

I actually feel like the last couple of chapters have really picked up the pace and we’ve had some interesting character development instead of just repeating the same formula. This chapter has shown some real diversity with regards to camera angles and backgrounds and conveys the movement between rooms and areas pretty well too - it’s all looking pretty slick and natural and we’re seeing a lot of panels with two or more characters interacting in various interesting ways. The last chapter showed another side to Daisy and Abbey’s relationship - it’s been refreshing to get back to some more lighthearted antics and see the group (mostly) all together, just seeing how everyone interacts. When was the last time you saw Paulo interacting with Sue?

Perhaps some of you don’t care - others may be more interested in seeing where Taeshi will go with all these characters instead of trying to force her to go over the same issues right here right now until it’s been done to death by whining on every page no matter what happens.