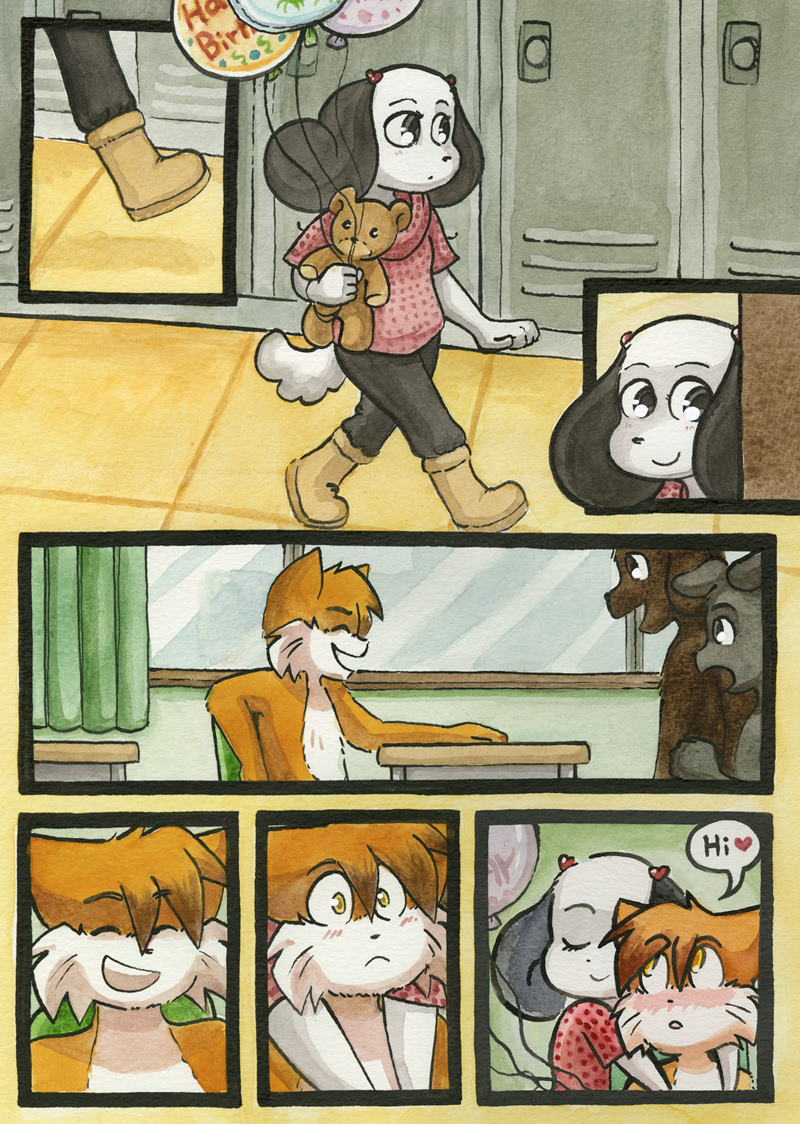 I had SO MUCH FUN painting her top, I would put all the red dots first before colouring the whole top in, making for a faded effect. It was really cool.

Oliver: New chapter! Apologies for the update delay, I went to sleep an hour before the update time and it turns out I made a small error in queing up the new pages. Eventually when I’m in the US the update time won’t be 4 AM anymore!

Paulo’s hanging with the dogs now..?* Or did they always have other friends not within the main group? Usually those people are at least introduced as a minor character, it seemed. Maybe it’s not actually so usual..?
I dunno - just seems like I’ve seen that dog-boy pretty often in the background…
Anyway… Guessing it’s Rachel’s birthday [February 11]** and she’s inviting him to a party she’s throwing..(?) (I mean, they are pretty close friends now. He’s told her a lot about his situation and how he’s feeling, I’m guessing from what we’ve seen.)

** I mean, so much time can’t have passed for it to be Paulo’s birthday [April 16], right?? Also, Rachel’s wing clips are now replaced with heart clips - an indicator that it is indeed her birthday, with it being just a few days before Valentine’s Day, which would explain the clips.

honestly i don’t hate Rachel and i can see this pairing but something tells me she will get hurt somewhere along the way wether they start dating or not.

asdfffff i have so many mixed feelings about this

and is that a Souppy i spy in the description?

Well this will be interesting, if he is still mulling over what Sue said to him about Lucy and his attitude towards her could effect how he will handle Rachael. We don’t know how they class their relationship atm friends, bf/gf, fuck buddies. I can see Paulo hurting another girl who has feelings for him over his feelings for Lucy.

Paulo’s look of surprise in the bottom middle panel seems like “where are those hands going?”