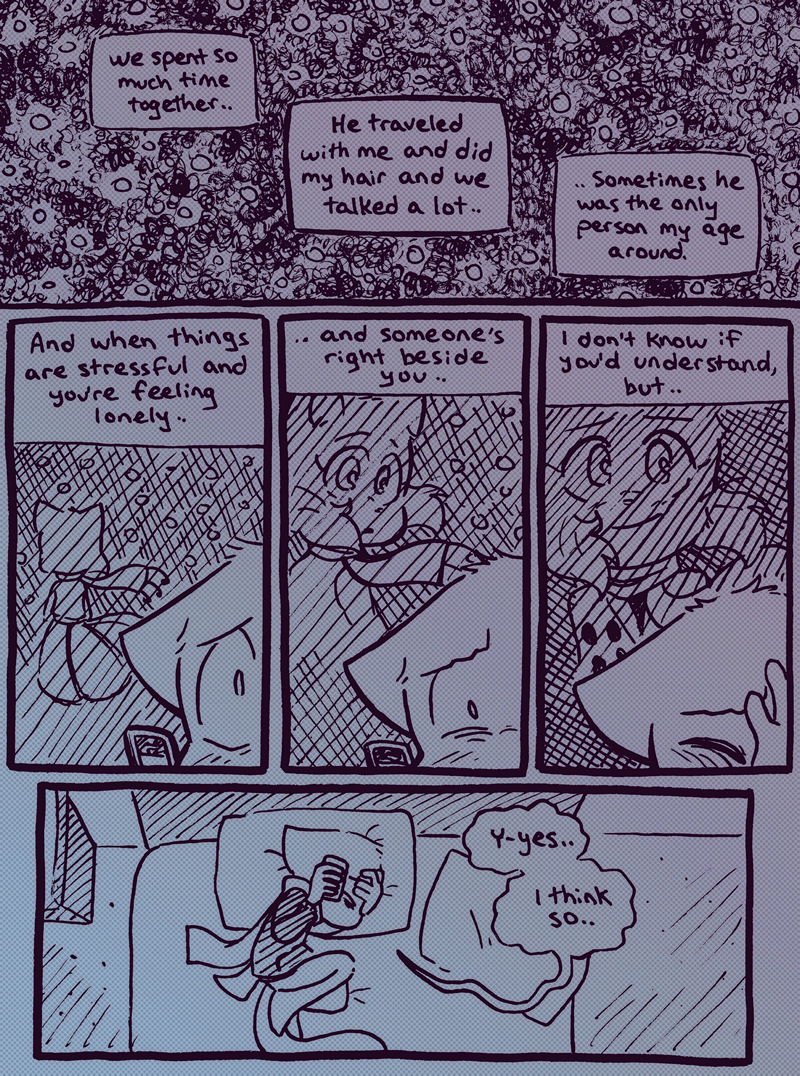 Veronica: Hitting him where it HURTS, Sandy is good.

Mike, you should've shut her down, jerk

Mike doesn't deserve this and neither do these girls.

Ya mean Daisy and Lucy?

Sandy too. We don't see her life too often but what we have seen is that it is very stressful.

Sandy: Oh him, you don’t to worry about him anymore. He lost interest in me, he’s more interested in stealing someone’s bike.

Mike: Why a bike?

Sandy: He told me it's the coolest looking bike he ever seen.

the sudden 180 of "i hate myself and you're too good for me and also the best choice for me you make me a better person" etc etc is so painfully familiar. Entirely possible that she tried to tell Francis they could be together and HE panicked about it and dipped? which in turn made Sandy panic? just a thought! people (especially young insecure people) might like the idea of a relationship they can't have and the thought of actually getting it for real is too scary

I think ypu are right about francis. I think when sandy ended things with mike she ran to francis and he rejected her. I only say this because in the chapter track meet page 23, sandy is talking on the phone with mike and sandy says “his loss is all i have to say” which struck me as odd because that usually what the person who was rejected says not the person who did the rejecting

it was just a phase, maishul!!

Hey, we get to see Mike hurting Lucy twice in one week! (the December chapter is running on webtoon)

It's a fun yearly yuletide tradition for Mike to ruin Lucy's life now. It's just not Christmas without it!

I feel ya on this page Mike, that is exasperating...

Yes, I'm glad that it's finally cleared up and clarified!

I'm so relieved it wasn't an adult

So it's looking like a big part of him taking Sandy back was his guilt off how he has essentially used Lucy in a similar way as Sandy is describing but for all these years since Sandy's been gone... Understandable but not a good way to handle things.

Now that it's confirmed Francis isn't an adult I sure feel bad for him. Sandy used him the same way Mike used Lucy AND he got fired? This is why hair and makeup people need unions smh.

Mike: I want to speak to Francis.

Sandy: He's having his bath.

Mike: Oh, really? Where are they hosing him down?

Awesome, we have francis age confirmed and the idiots making massive assumptions based on literally no info can shut up LOL

This, but less antagonistic. Nothing is confirmation until confirmation; the rest is vibes.

It's good to theorize, bad to be like I KNEW IT and getting everyone riled up. That behavior buries the intended story, which I know we all care about, ultimately.

I don't actually care about Francis' age being one of these, but like when people piled on Mike for saying Sandy cheated on him, saying he was exaggerating / lying.. it sucked for those who didn't hold that opinion. At least me.

There's no avenue for getting, like, an apology on that. People just move on from being mean to others, sometimes.

No need to be a jerk. Most professional hairdressers are well into their 20s so it was a reasonable concern. It's a relief he's closer in age to Sandy but I'm not stupid for assuming otherwise before we had Sandy confirm it.

What professional hairdresser for an internationally successful fashion model is under 18 lol. It makes sense to assume adulthood

Its a comic about anthropamorphic cats. Shush

This is so manipulative, even if not necessarily on purpose. Maybe it was that way with Lucy, but what makes that worse than being ignored by Sandy constantly? Mike was ALWAYS there for Sandy. What makes his feelings for Lucy fake or desperate?

Sandy's getting in his head and I don't like it.

Damn the parallels he's seeing here, boy's torturing himself so much...