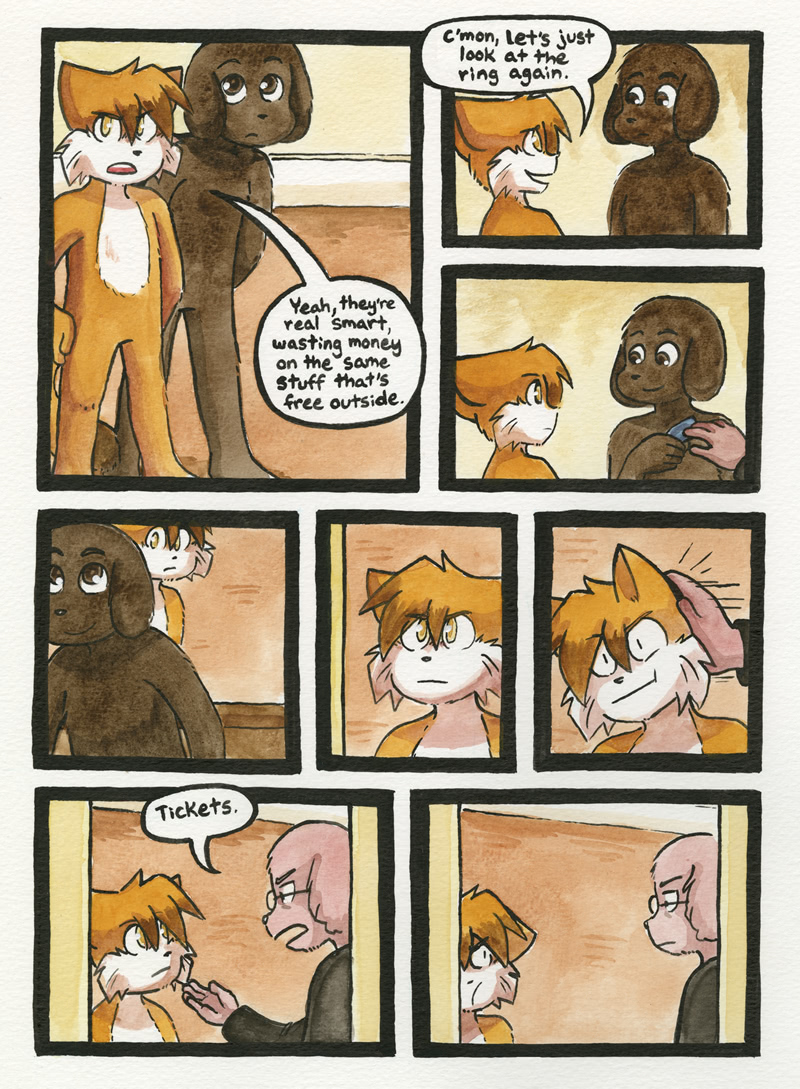 Veronica: David wants in on the learning party

Aww, left alone by himself. I bet he doesn’t have the money for a ticket, so he’ll have to go be all Paulo by himself.

Peh, who needs a fancy exhibit?

Up to this point, the chapter was basically Paulo and David Immaturity Hour. However, now I feel a pang of sympathy for Paulo. He’s poor and has no money for a ticket. Because of his socioeconomic status, he’s effectively barred from accessing the same learning opportunities as his better-off classmates. Thus he is left out of the group altogether, with not even David around to talk to, which to him would be worse than enduring some boring art exhibition.

For Paulo, this realization could actually turn into a positive. It may force him to grow up, become more responsible, and get a job so that he can earn money and then be able to participate in these sorts of opportunities. His 16th birthday is upcoming in April, which would allow him to get hired by many retail outlets. Hence that push on the head he received in the sixth panel might just turn out to be the “critical hit” he needs to set himself on another, more positive path.

@daft_inquisitor: Pushing is still physical violence, and even Paulo though basically mocked his job to an extent and doesn’t have a ticket, that doesn’t mean that the worker gets a free pass to push him. He works in a museum, so of course there are going to be people who find it boring, especially teens on a school trip.

@Macca: I agree with you. David is acting like a jerk here. I’d assume he does know that Paulo is poor and that he knows Paulo would be left alone if he went because he doesn’t like learning much, but he chose the exhibit over his best friend anyway.

This isn’t the first time he has shown terrible behaviour as a friend either, he was the one that pressured him into having sex with Rachel and Jessica, but when things started to go wrong after that, David wasn’t there to help him out, Jasmine had to pull him out of the mess before it could all blow up in his face.

I don’t remember when it happened but I’m pretty sure David also barked at him at some point when he was doing something he didn’t like, despite knowing of his phobia, and even though Paulo was quite upset, he was just his normal cheerful self. It’s not commonly accepted as good behaviour to play with your friend’s trauma.

And when he couldn’t choose between Daisy and Tessa, David basically forced him to choose who would live and die in a hypothetical situation and it just screwed with his head MORE because his feelings for Daisy were different from the ones he felt for Tess.