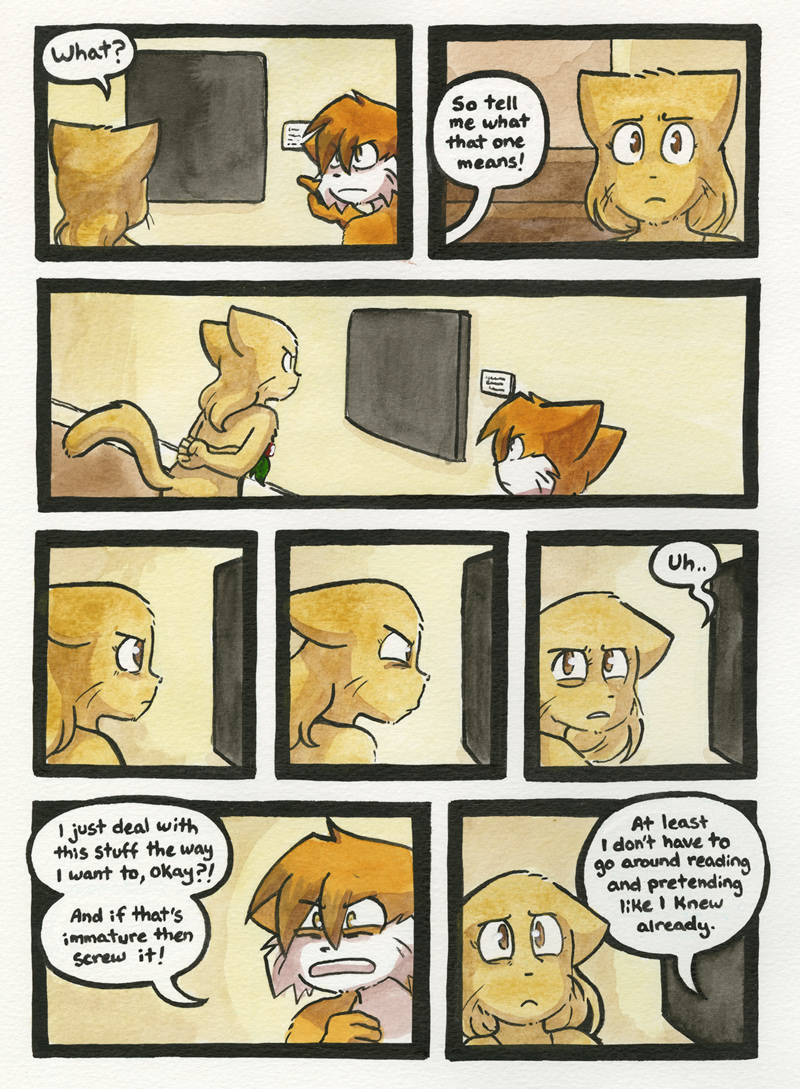 Hmm…you know what, forget there being any single ‘critical hit’. This chapter is more like a blazing inferno, with people getting burned left and right, for one reason or another.
Perhaps lending out metaphorical flamethrowers IS a bad idea…
Also, that painting. It both amazes and confuses me. I mean, it’s just…an empty blackness. But at the same time, it’s like that emptiness that David described the hole from earlier as. Kinda creepy…
Although it’s probably just pop art. I mean, really.

Man, this is why I love Paulo. Sue insulted him, he insulted her back, and she used Lucy to prove her point. I thought that Paulo was going to get physical for a moment but rather than hitting or even yelling at her, he turned away to leave the conversation. Sue knew what she said was a low blow so she apologized for it.

And Paulo accepted that apology. He moved on. He was hurt but I think that he recognized the amount of pride that she swallowed by saying that simple word. You can practically see him stopping to listen to her in the previous page. He didn’t retort and he took the apology on what it was, a “sorry” for a heated moment that they both didn’t need.

But Sue stated that he wasn’t trying shortly after. So Paulo, rather than tell, shows her what he means. That moment where he demands an explanation from her on what the painting means. I absolutely love it. He shows her that he doesn’t get. He shows her that what she’s feeling is what he’s been feeling all along (confusion, frustration, ect.). He doesn’t get it, and he admits it through his actions and emotions. Sue, on the other hand, tries to deny it. Sue tries to pretend to knows what the art means of the pieces and I’m guessing that this denial is what ticks Paulo off. They are in the same boat and Sue is trying to convince others that she’s on a cruise ship. They are equals and she’s trying to be taller than him.

Paulo may be immature, but this page at least tells another story. He lashes out his emotions, and he does it without pacifism and without any violence (which is a hard thing to do even in real life). He shows his frustration and his anger in a pure form and it doesn’t have to be watered down in order to refrain from causing a scene. The impact is as hard as it is effective on Sue, as he meant it to be, without doing anything more than “than tell me what that means. Show me you’re better than me.” He knows he’s immature in comparison to most of the cast, as stated, and he’s trying to be a better person. But it’s hard to take criticism from a hypocrite, and he makes no barriers in pointing it out.

I hesitated on the “critical hit” being in relation to the Lucy comment. I think that the real critical hit, and the “broaden your minds” comment was directing towards the impact on Sue’s pride and Paulo’s budding maturity.

I applaud you, Taeshi, for this chapter. It didn’t disappoint and it certainly has broaden, at least mine, mind.

I see the group falling apart. Sue was a really good friend and Paulo just shot her down. First he made Daisy cry now he’s shooting down Sue. Ever since Lucy left, Paulo has been a huge ball of cranky.

I think they’re both angry and both in the wrong. Both of them need to admit they miss Lucy a lot. They have a lot of anger stored up from losing her and don’t know who to take it out on. Who caused her to leave? Who caused her to hurt? What happened? Those are their questions that haven’t been answered. When you lose someone so close to you, you lash out at anyone, even at another really good friend.

To be honest, I’m glad that someone is behaving differently than just behaving like everything is normal. Ever since Lucy left, everyone grieved for a lil bit, then stopped and resumed their lives as if everything was normal. The ones that don’t know what happened don’t even question what happened. To me, Paulo and Sue are the only ones still wondering, still wanting answers. And that’s why they act so out of place and can’t resume their lives as if nothing’s happened. They can’t move on without knowing.

This is only my opinion. I figured I would get it out there though. I think they need to somehow realize that they’re only acting this way because they both need and miss Lucy. And that they should team up to figure out what happened.