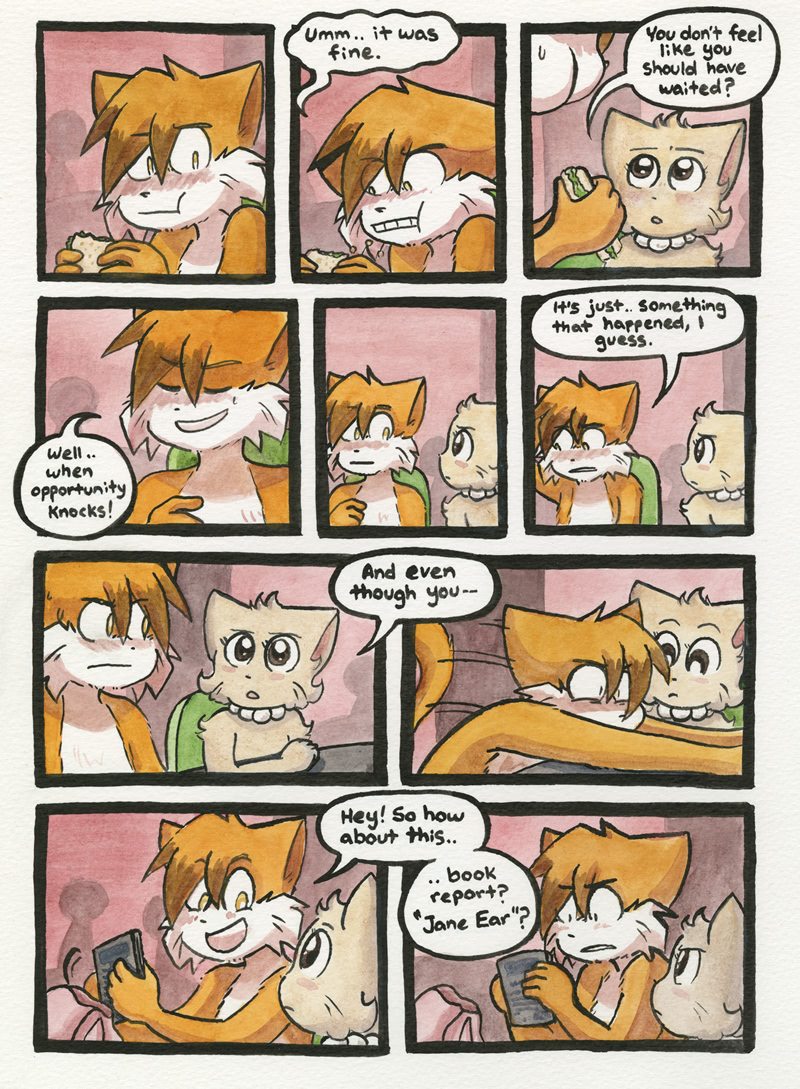 Grabbing the first thing available and trying to distract with it. A valuable tactic, indeed. Like…
“Oh hey check out this awesome sandwich!”

But yeah, that last panel is pretty hilarious. It’s basically ‘oh wait what DID I just grab?’ That expression alone practically sells it, here. Although, Daisy does look somewhat upset about him seemingly ignoring her. She’ll probably get a bit huffy about it.

I’ve never really agreed with the “guys just like sex and want to have it all the time because they’re horny bastards” stereotype (this IS high school, but still). Still, guys and girls tend to view losing their virginity as completely different events. For guys, stereo-typically it’s something to brag about. For girls, it tends to be a more intimate encounter, something that proves they’re with the right person. I do think Daisy would be better off asking one of the girls at the table. Tess, or heck, even Jess or Rache, though Rache may not be the best choice, given her views of sex.

I guess it’s natural for her to want to go to someone close, like Paulo, though. I enjoy how candidly Daisy can talk about sex. It’s refreshing to see a few characters whose views of sex are a little more healthy and reasonable than the average teenager’s.

Yeah, talking about losing virginity is different between a guy and a girl.
For a guy it is often a moment of pride and for a girl, as many have put previously, can be an “earth shattering” moment.
Paulo further supports this with “umm…it was fine” and “well…when opportunity knocks!”
Most, if not all guys are hardwired deep down in their genetic code to seek out and lose their virginity, multiple times, and enjoy the process greatly. It is not a thought or a consideration, it is simply a fundamental instinct that guys have to control, because we don’t live in the “wild” anymore.
Girls feel special because of this concept that they have what the guy wants, but can’t get without jumping through massive hurdles to provide evidence of “trust”. Because of this, most girls want the justification that the guy likes her for more than her body, because she doesn’t want to feel like an “object”, “used”, or “another piece of meat”.
If Daisy really wants it and Abbey wants to give it, they should experiment with it a little or give it a “test run”. However, if they can wait that might ultimately be for the better (social applications notwithstanding).
I know you’ve been cultivating the emotions for “intimate love” Daisy, and now that you have a guy, a good guy, who is close, you feel it’s time to take it to the next level. However, you should discuss this with someone of the same gender (Jess or Rach) who have “been there” and relay to you in words their experiences, which you can then better drawn your own conclusions on this matter.