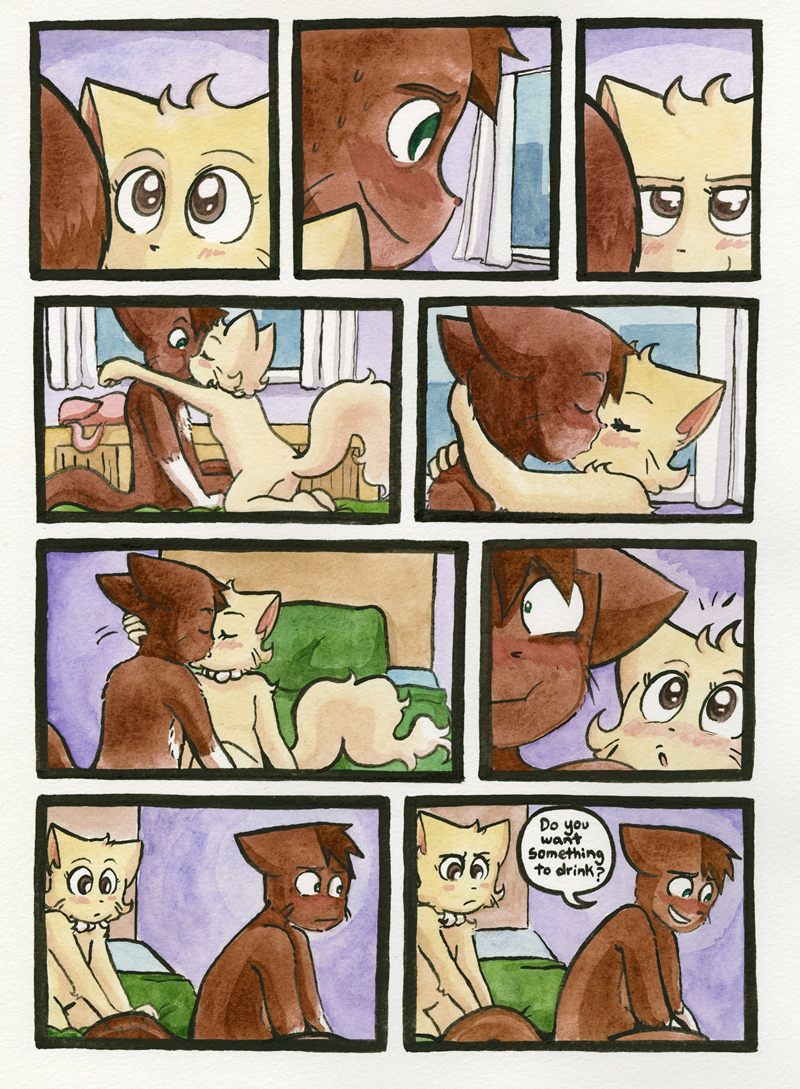 It’s funny that Daisy is getting annoyed by Abbey’s sheepishness when it was Daisy who really had to drag Abbey’s confession out of him in the first place!! Abbey doesn’t want to cross any lines, Daisy!! That’s who you signed up for!

Abbey being awkward and Daisy being kinda annoyed. I have to admit, I did not see that happening…at least, not in this particular manner.
So it looks like Daisy was the one to instigate this occurrence…I guess she actually got what Tess meant after all. Unless I’m assuming too much and she just wanted some EXTREME CUDDLES from Abbey. But with that look in the third panel…probably not.
Dang. Seems like we underestimated her. Though she IS in the same grade/age group as everyone else, so I guess it shouldn’t be a huge surprise that she would know…

Am I the only one that doesn’t think this is out of character for Daisy or Abbey? Abbey prides himself on his gentleman nature and loves her deeply, but he also has a lot going on within himself - dealing with the whiplash of living in an abusive environment, trying to deal with said issues and the fact that he found out his mother passed away months ago. That feeling stays with you. All this can contribute to Abbey not feeling ready or not wanting to go much further than sweet make outs. The next step doesn’t have to be sex. It could be more passionate make out sessions, fooling around intimately or even oral sex, but not intercourse - which seems what everyone is assuming is the next course of action for them.

Daisy has had her insecurities and whether or not she has fully dealt with them, she at least feels comfortable and safe with Abbey. She loves him, and feels like she can be herself with him. She knows he accepts and loves her for who she is, and that’s one of the biggest turn ons for women. She might not be wanting the bone, but she does seem to crave more intimacy, which is nothing unusual regardless of how she is as a person. She’s probably thought a lot about it and is ready, this may even be her way of throwing a hint at Abbey that she wants to experience more, even if it’s just passionate kissing and body’s mashed together while their legs and arms intertwine lovingly around one another or full blown sheet shaking love making.

Just because a person acts one way in public, doesn’t mean they necessarily act the same way with their intimate partner, or when it comes to intimacy itself.

I think that because we’ve been seeing Daisy at her sugary-sweetest for a while, that we all forgot that she *does* have a wilder side. Daisy does really like Abbey (I don’t remember if she’s said the “L” word yet), and Abbey loves Daisy, but he’s too much of a gentleman to push her. But she does have a headstrong side- she’s probably going to make him more uncomfortable. Ah, young love~