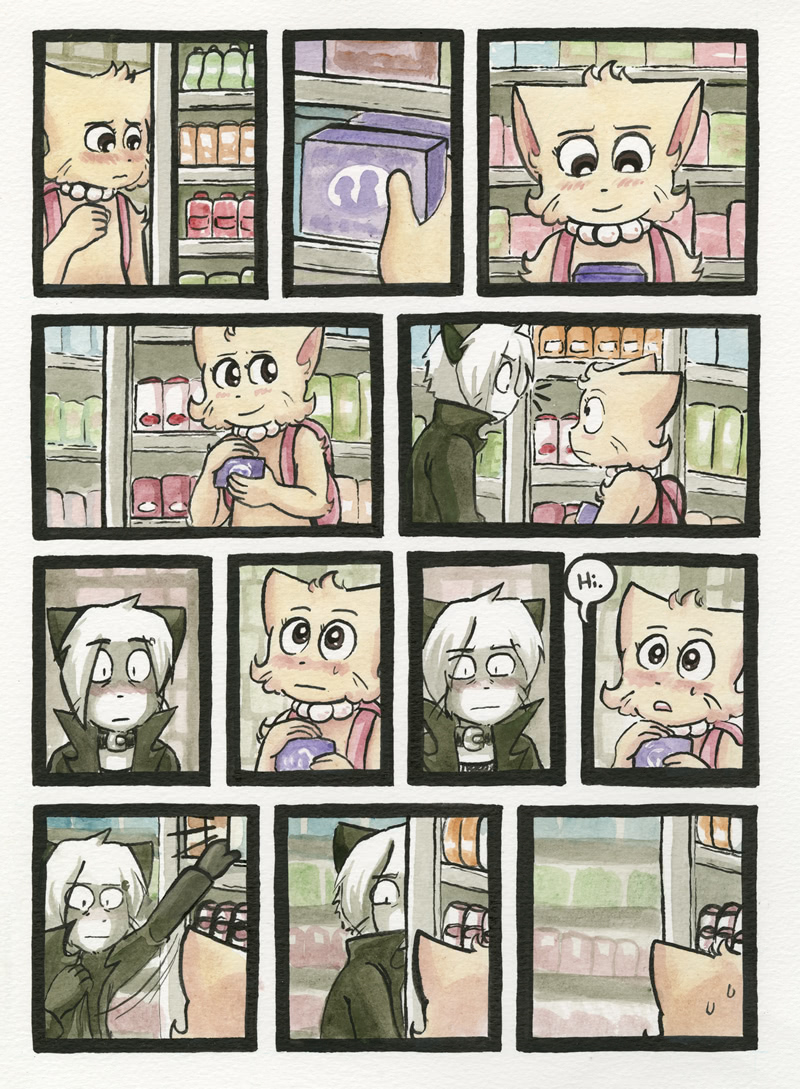 This is hilarious. I love the fact that Augustus is just caught like a deer in the headlights when he sees Daisy. You can really tell that Augustus wants her to see him in a better light, and she makes him a better person because he almost instantly puts back the item he intended to steal. I do not think that Augustus even noticed that she was holding a box of condoms because it looks to me like he keeps his eyes locked on her own eyes the whole time. I get the feeling he will do a double take and be like “Wait a second, was she holding condoms?!” in the next page. But in this page, he is just too thunderstruck at running into her to really take it all in.

All in all, hilarious! Great way to break the mood from being all serious!

Side note: After reading some of the other comments saying how “shameful” it is for Daisy to want to lose her virginity. Please, check yourself. Yeah, it’s a comic, but if some other teenage girl was actually trying to feel better about herself, and she felt she needed to try to do this, or felt she wanted to do this with someone she feels she loves, then who are you to judge? At least she is bothering to use protection and is being smart about it! Do you know how many kids now a days lose their virginity at a very young age just for the sake of being ‘cool’? Do you know how many don’t even bother using protection and don’t care if they get pregnant and then expect the rest of their family to raise their kid who they probably have no clue who the father is? Yeah, a lot! At least she is doing it because she feels she loves him, and is being safe, there is no shame in that. So to all the people who feel this is so horribly negative, just stop and think. Seriously. She’s not a slut, she is a teenager who wants to experiment.

Auggie has the best embarrassed face in the history of BCB males. Ever. His flush is freaking adorable, and I absolutely love how seeing Daisy makes him put the item he intended to steal back onto the shelf. ;3; Ohh, Augustus. Why are you tragically adorable. Only Daisy could make those facial expressions on you happen. |D

In other news, Abbey, please don’t run into Auggie as well, please. |DD

Ehem now that thats out of the way.

I think everyone is forgetting that Daisy was doubting herself in school and asked paulo about his experience. When he warned her against doing it she got mad. When Abbey asked if she was sure, since she looked unsure, she looked at Paulo and then got mad and agreed to it again.

I am looking at this as her just trying to show how adult she is by doing it. If she is having doubts, wont she have regrets later?

It seems to me she is only going through with it to prove a point to paulo…. at least that is how i see it, she just seems desperate to prove she isn’t as childish as everyone says she is.