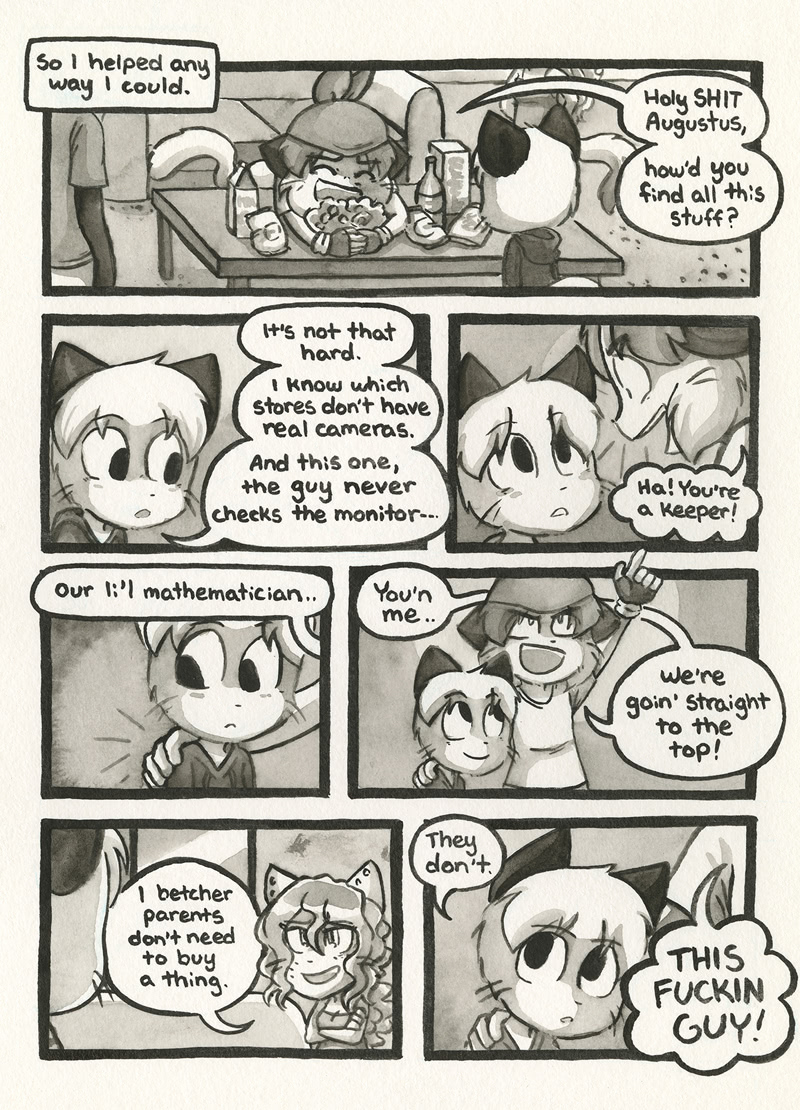 Veronica: A lot of this is kinda implied in a BCI that takes place in an alternate timeline. I always felt kinda bad that it wasn’t a thing until now, though having a chapter about this was always planned.

Looks like Augustus dealt with his parents’ neglect in probably the worst way he possibly could.

The hand on the shoulder looks like he’s liking the attention this “older male figure” (he probably couldn’t see Alej past those three words) gives him.

Not to psychoanalyze or anything; I’m just basing this off of what I’ve read throughout the entire comic. For years and years. Over and over.

So, this is why he stuck with them.
He wanted a place where he could hang out and he gave them a reason to keep him, by providing that he could steal for them.
He probably ate up all the sense of worth bandana cat was feeding to him and it probably felt good, since I bet no one really cared about Augustus. It’s probably another reason why he decided to stay, for the praise.
Augustus must be pretty good at stealing, because it sounds like he steals things for his parents, judging by the “they don’t have to buy anything” statement.
I do find it halarious how bandana cat says “they’re going straight to the top” when they’re really not going to be going anywhere. Years later and they’re still hanging out in the same place, still stealing candy, and plotting a 2 year plus revenge against school kids who’ve probably already forgotten about them within the first month.
It also seems bandana cat now takes Augustus’ ability to steal for granted and just keeps him line like another goon. It must’ve been nice then Aug, but it’s different now and when things get different, changes need to be made.

With regards to Alejandro calling Augustus “our lil mathematican”, I’d hazard a guess it’s him trying to sound clever himself. Somewhere along the line he’s picked up that mathematicians are clever and plan things out carefully, he wants to sound sophisticated.

Meanwhile, on the one hand for Kitten-Gussie, you have the parents who don’t give a damn about you, despite the fact you bring in free food for them. Then you’ve got a older guy and girl, who take you to a house that’s just as good, if not better, than your parents’ house, and they praise you and appreciate you. It’s so simple and yet so chilling because this will create a genuine sense of loyalty and gratitude to Alejandro even under the fear that presumably ties Augustus to him.