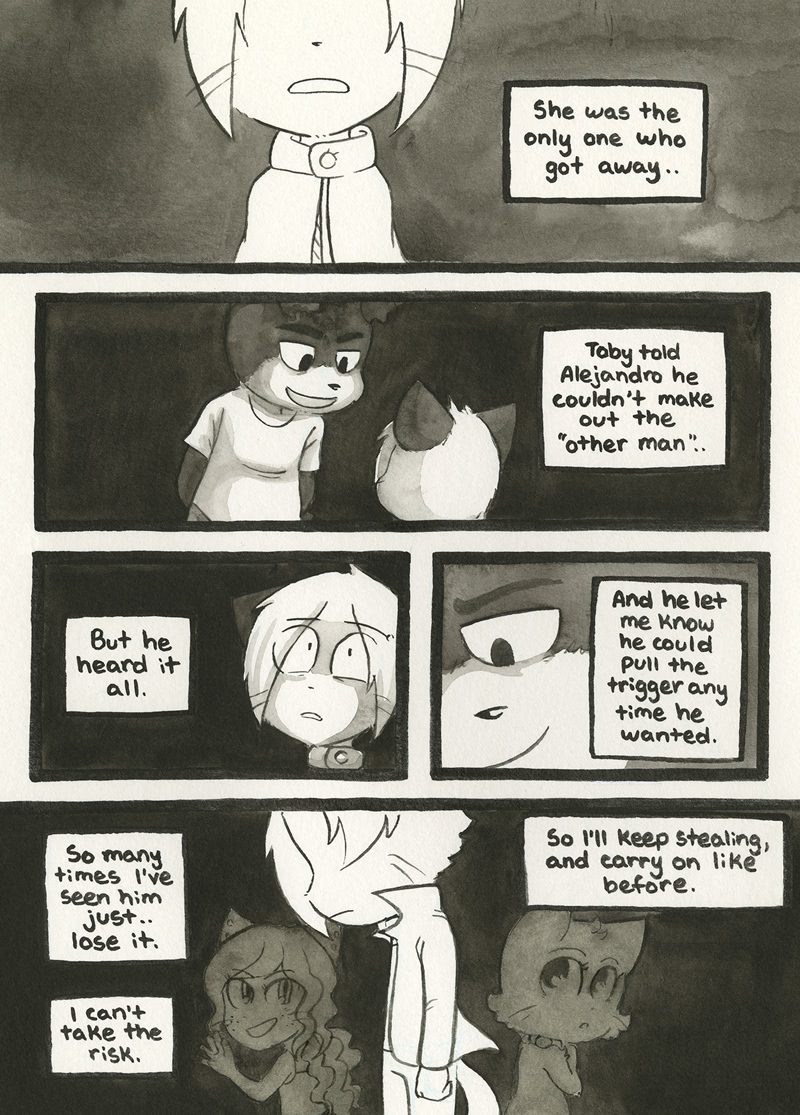 Veronica: Can’t prostrat your way out of this situation with your big 4D chess brain if your opponent goes blind with rage and could just kill you with zero hesitation

Blackmail. Allllright.
No matter how hard our lives are, they cannot be any worse than Augustus’s.

And thus, the title. Poor Augustus… But at least he can get revenge through helping the main characters.

Those that are wondering why Augustus is still afraid of Toby and the whole situation, why he might not use snail mail or other forms contact.

1. When you’ve been abused and manipulated your whole life, or a good chunk of it, you feel trapped. Your whole line of sight is in a fog so you feel that your options are limited when they might be infact, near limitless. That’s like saying “Why are you depressed, you should do -this-.” The notion of whatever that thing is may seem impossible because you simply don’t think you have the will, or it won’t work out or it’ll just make things worse. I for one could have left home at any time I imagine. But I never did and felt like I would forever be under my mother’s abuse. Ironically I’m still home, though the only reason I’m no longer being abused by her, is because she died three years ago. I never realized I could have left and changed my situation until I started breaking out of my depression.

2. It would be best and safest for Augustus not to have any contact with Mel. We can all see that Ale is all brawn and no brains but Toby on the other hand would not be above following him and looking through any of his mail if Augustus had any. Augustus could always use a post office box, but that would require money he doesn’t have. The same with school. Just because there are computers there doesn’t mean he would have access to email. When I was in school, that sh-t was blocked along with other social media sites. You could say he could use the library computers and that’s fine, but what are the chances he and Mel have exchanged email information? It’s very slim. Those chances diminish because she wants and NEEDS to disappear. Sometime it’s painful and can cause regret but she needs to separate herself from her past, anything that can trigger her, including Augustus so she’ll be able to recover and reform. With Toby hanging over his shoulder, he would not want to risk it anyways just to make sure she is safe and sound.

And for those that complained how Toby looked friendly in the beginning and now he’s a total douche - looks can be deceiving and if you’ve had the good fortune of meeting ‘friendly’ people that didn’t have crooked motives then consider yourself lucky. A friendly face and demeanor, means nothing and does not reflect a person’s true motives. Toby is not against putting on a friendly or passive face when things are ‘quiet’ for a lack of better words, his true feelings emerge when he’s watching and/or participating in hurting someone. Augustus knows this and he’s not about to underestimate the creep. So Augustus, while he may or may not be at a disadvantage, he’s playing his cards the best he can, the best he knows how. He’s bidding his time just like Mel did, like most people do in similar situations. And it’s either going to act when an opportunity arises or when he has reached the boiling point that he no longer has any f-cks to give consequences be dammed.