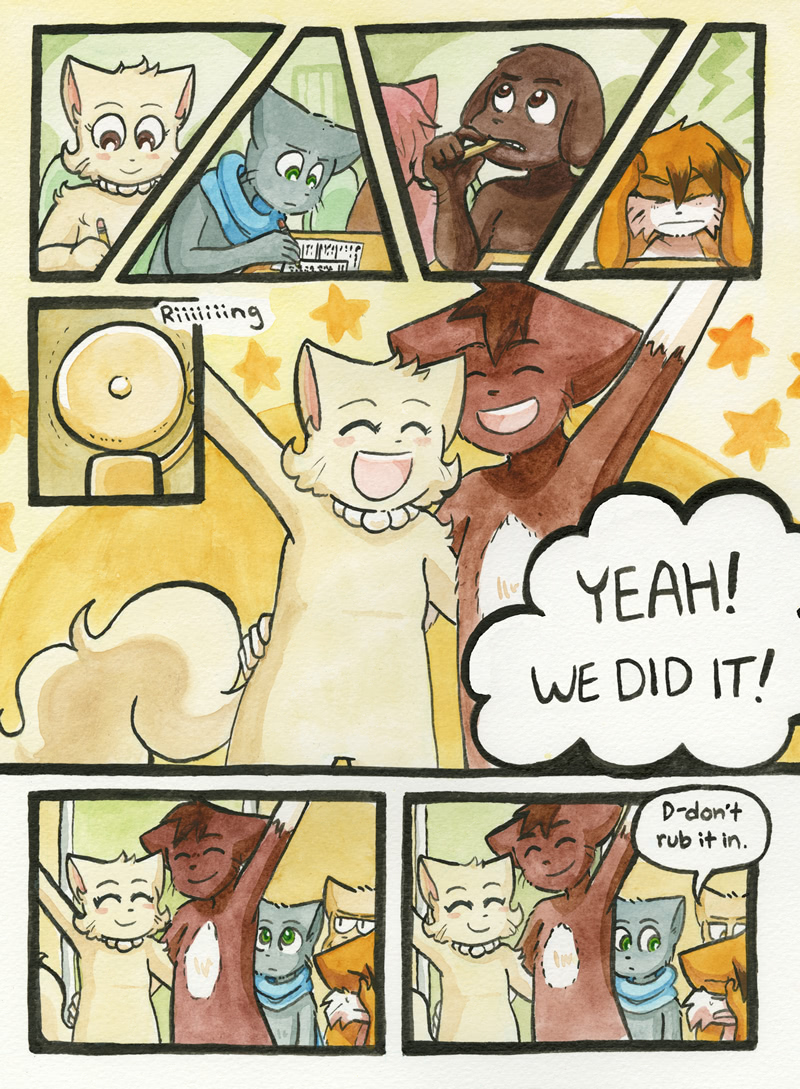 Just another quick reminder that we have this BCB Tumblr now, which you might want to check out if you’re the blogging type.

They did what?! Please tell me it’s something school related or they found where Lucy is!

Daisy looks so pudgy and cute

Well, Abbey and Daisy are very happy to finish their tests. Sue is like annoyed and Paulo is still a little upset or somthing. He might not of passed so well or that the midterm was agonizing but tests can like that to some people.

I was hoping to find a chapter about Lucy, but it may be something like that. I’ll need to find out later in this chapter.

I know those feels, Paulo.

, and who was not hard-working enough

Well they’re awfully smug about it. They’ve got a flashy background and everything. Heck, I think Sue agrees with me on that…just look at that stare.

Well, Abbey, I guess this shows that Paulo actually did need help last chapter. But he got stuck with Rachel, so he didn’t get much actual help, despite her better efforts, due to his awkward proximity issues and whatnot.

He can’t concentrate enough to do his midterms.

I like how happy Abby and Daisy are about it. They’re so cute together.

are you ok, paulo?

Done with the mid-terms, on to more serious business. Like, world peace or something.
Or peace for Roseville.

Yay, they passed another ****ing test, get a damn room

The last couple of chapters seems to have really emphasized how short Mike is.

Just a thought is there a slight innuendo going on there with Paulo’s reaction or is it just how my mind works.

Happy Abbey! It’s about time we see Abbey happy again, lately he’s been angry and tired. I hope Paulo didn’t fail whatever this test is.

……
A traditional scene after an exam…

Then we find out that, despite how miserable Paulo looks, he was among the best scorers from the midterms.

(Really, I don’t think he’ll be top of the class, but I’ll bet he did surprisingly well, or at least much better than he thinks he did. Something tells me he’s a lot smarter than he acts, once he seriously tries.)

Someone couldn’t focus on the exams, thinking about a certain lady with white fur instead…

I love Abby x Daisy. Hope she gets over Mike so they can continue to be the only functional couple bittersweet has.

Darn it. Stahp, @Taeshi ! Too much feels!

Sooner or later, there’s gonna be a Paulo/Abbey confrontation. And I’m gonna be eating popcorn and laughing the whole time… until Daisy ruins it and Abbey forces her to choose between him and Paulo. Ah, youth.

jajjaja daisy as cute as always, and loooove it sue face in the last two panels hahahaa, the ¬¬ is oosom.

@Hongkat: Haley’s not in their grade, Sandy’s in a completely different city, and Tess’s is in another grade. Why are you adding them into this?

Is it just me or is there something completely off with Mike in the second mini-panel?
The whole thing about that panel just seems off compared to the rest, like he’s barely holding the pencil, and his neck is also incredibly thin and long.

This comic is amazing!

They should get around to doing it. Le sex. Or just some making out. All we’ve ever seen is Abby and Daisy holding hands, Except for new years and that doesn’t really count.

Well that was very anime-esque.

I sorta am starting to just dislike all the characters. I guess it’s due to still not knowing what happened to Lucy (the details) everything just seems like filler. Well it is. I know it’s necessary to add filler stuff in but man, I just want to know. She doesn’t have to come back but I just want to know, even one line from Mike’s mother saying what she did would be satisfactory. I’m afraid I’ll just stop reading, but it’s such a good comic I don’t want to but augh complicated feelings.

Also, how long has passed now since that study party? Was this the next week or two weeks or what? I forgot if they’ve mentioned the time of the midterms before. If I knew I’d be able to properly judge the characters on how fast they’ve moved past Lucy. They all seem to know what she did, but they don’t seem to care much except Paulo, who’s a wreck. Though that could be from the midterms. I dunno, I just hope we get some good drama but don’t centre it around Paulo, he’s got enough for a while.

@seoq: “…so they can continue to be the only functional couple bittersweet has.”
Excellent point! It’s important to have contrasts, eh? If everyone were dysfunctional and miserable, it would be boring. Eventually.

@pfeuh: “…is there something completely off with Mike in the second mini-panel?”
Yes I agree. Mike’s neck is skinny, but not THAT thin! And the pencil holding looks very odd. BCB Cats do have opposing thumbs, yes?

The “meaningful eye movement” in the last two panels is terrific!

Poor Paulo! He thought the study party day was his worst? Oh my!

am i the only one who thought that ababbabubuab

It’s cool, man. We all get that time on the exams. Sometimes. Speaking of exams, I have one in an hour; wait, why am I still here?

I, too, hate exams. They suck.

I’m guessing this is what I have to deal with when I enter my second year at high school.

@Chrisd765 That was probably my first thought when I saw the last 3 panels.

Daisy and Abby may not have meant it that way, but from what Paulo went through the last 2 chapters, I can only imagine how much he got “done” not once, not twice, but 3 times. It’s just so bad that you might as well throw him a shovel while he’s still in that deep hole so he can dig his own grave.

Yay tests! My favorite part of real life and BCB… Soooooo when will Paulo’s life get straightened out, or Mike finally explains what happened to Lucy or maybe even Maybe We Will actually find out WHAT HAPPENED TO THE FORMER MAIN CHARACTER. I’m fine if she never returns but her disappearance is almost as sudden and complete as Kitsuna’s … On another note where is Augustus it’s not like him to miss a chance for sarcastic commentary.

Well, can’t we see who studied. I felt like Paulo today in Trig

Wonder when Lucy will be shown…

Oh Paulo, crude as ever. Looks like if you ever manage to become studdy budies with her you’ll be in second place.

I just finished re-reading everything after ‘Starting Over’, And I noticed something that Mike apparently didn’t. In the comic (Don’t know if she did it off screen) Lucy has hit him a total of ONCE, minus a guest comic in ‘Guest Comic Bonanza’. The one time she did hit him was when she got put as the role for the female lead of the play. Just something I thought I’d toss out there.

New to this comic, been kinda hooked all the way through. Just gotta say, what a bunch of *******… I mean cats that is, and mopey soppy drama struck cats at that.
Overall, pretty good story, if only my life were like all this, instead I got stuck in the house… overly sheltered and then turned weird

Keep up the good work, I expect to have plenty of reading and enjoying this plot as it unfolds…. *ahem* I’m still a little ways back

Unlike everyone else’s relationship, they lasted the week!

They sure do care about Lucy huh?

Since none of them tried to directly investigate what the hell happened, or sneak into the hospital to get some answers directly from the source.

Not to mention putting 2 and 2 together and realize a certain someone in the cast should’ve been thoroughly cross-examinated regarding what happened.

But nope, they’re just sitting passively while she fades away in yet another fluff filled chapter.

Woah daisy IS startin to look a tad bit pudgy >.>

@Pestel: Good friends or not, you gotta have priorities. Flunking a big test isn’t going to help Lucy in any way, and I think they know that. Their time was much better spent studying.

@Everyone: You guys know nothing about positive body image, do you? Daisy’s fine, let it go. Or are you only interested in girls that have the body of a supermodel?

@Dudeler Good not just me then

Aw!, I miss Lucy…, and daisy was fat a moment ago…

@Follarch: Go reading it in the forum.
The full version:

……
A traditional scene after an exam… (Note: not what really happen in the comic)

And another kind of students: Er… Finished. Er… I don’t know the result. Err… I don’t care. —Not the worst then is the best.

Since I’m only able to come back here once in a while, can someone refresh my memory as to what grade they’re in?

Glad I’m not the only one to notice Daisy’s adorable pudgyness.

There might be a twist to something.
I’m sure of it.

She only was hiting him often in the very old pages for comic humor purposes but Mike was hitting ppl a lot aswell.

In this drama version his main purpose seems to be ignoring Lucys improvemens as friend, turns every cause of evil into her and made a tough job to bring her to a breaking point. He became a pro in convincing her that he is all that matters to her as “replaceable” security blanked and then being a jerk about it

All though now we for once see a normal side of him again.

Now Daisy is being lately scary cheerful, containing everyone to get quickly over with that they lost a long time friend and don’t even know the reason. But hey, at least she is happy together with her Abbey so there is no reason for her to know how it is to loose someone she loves in the moust harsh way

Heh, maybe moving away from this place is the best thing that could happen to Lucy yet! Still, I could see her come back to ATLEAST say simple good bye to everyone…. even to Mike without picking any argument with him

I really wish there were polls or something on pages like this for people to guess at what a character means.

Y is daisy fat? My daisy can’t be fat!

@Venorik
Great, this means that instead of plugging actual plotholes, there’s just been useless filler chapters going on.

now i feel bad for Paulo

(my bro>) Paulo stop making everyone feel so bad! (me in the back round) I WANT MY LUCY BACK!! WAAA