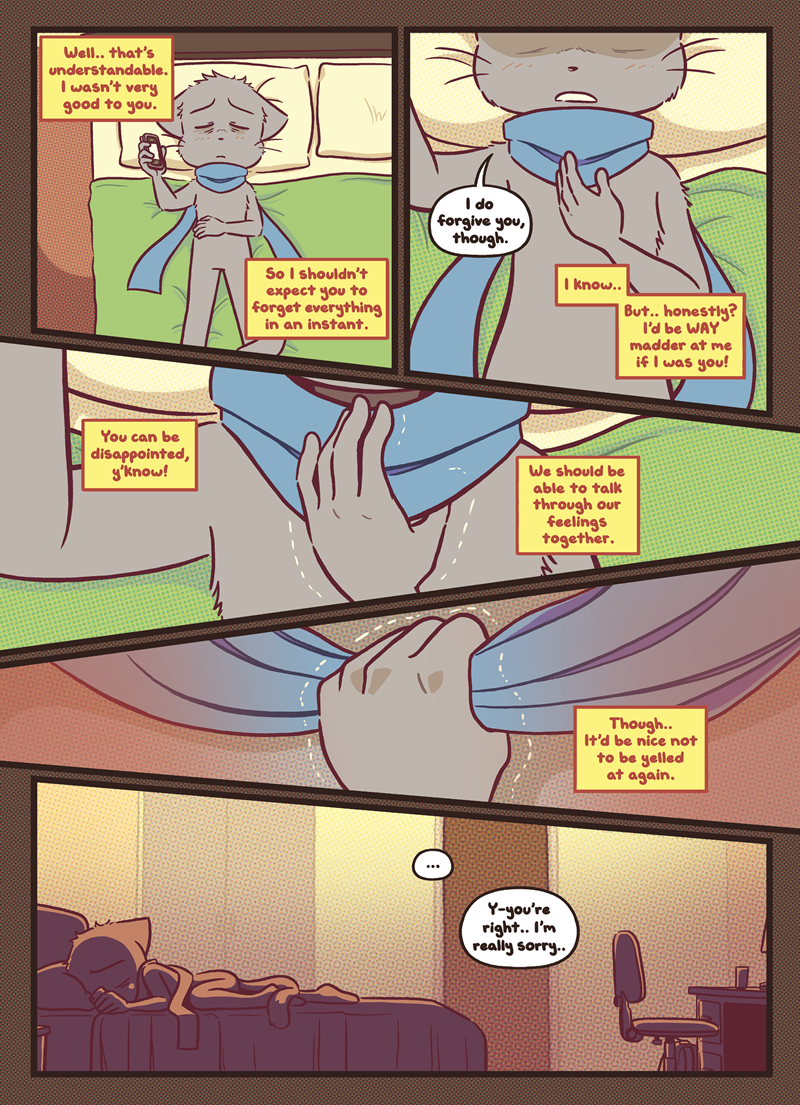 Veronica: Why does Mike need to be madder at you, Sandy… what are you letting slip…

Can someone remind me if Sandy ever apologized for yelling at Mike?

She didn't. Instead she doubled up on the pain by throwing an offhanded comment about him having too much free time and also being childish. :^)

Such a sweetheart, that girl.

I feel for Mike here. It's clear that it's not that he doesn't feel like he can talk about emotions, but that there's nothing to say that can fix it. He's checked out of this relationship.

He was 1.5 seconds away from calling her a parasite

Sandy: No you’re not.

I can't with her. He's been trying to reach her for ages and now she's pulling this stunt? She admitted to cheating (emotionally and maybe physically...) and didn't even have the courtesy to tell him UNTIL he snapped after months of ghosting ... and she's blaming him for that, too. She's the last person to talk about the importance of communicating feelings.

Mike isn't perfect but no one deserves whatever emotionless bs that Sandy's pulling right now.

I agree; I think she probably meant to say something more along the lines of "I hope we can talk about our emotions maturely, without it becoming a screaming match." but the way she phrased it was a bit manipulative...

And the cycle of bottling up feelings continues.

I'm guessing that Mike feels guilty because he had his little make-out session with Daisy at the Library; but all this sneaking around and tit-for-tat nonsense is just so toxic.

Up until this Chapter, I've always given Sandy the benefit of the doubt. We don't ever get to see her side of the story, so we always have to piece together the puzzle. However; I also realized that we don't exactly know WHAT Mike likes about Sandy. He's only ever described her as "Beautiful", "Wonderful" and "Busy". It's one thing when they were in grade school and it was just a shallow crush; but at this point, I would like to hear exactly WHAT is it about Sandy that does it for Mike. Every other character in the comic, I can describe with just their personality traits and you'd be able to guess but Sandy I can only really define her by her modeling career.

She’s just a little piece of work isn’t she?

She is toxic. People who don’t see how manipulative and calculated she always is, don’t understand how abusive relationships start.

We see very little of Sandy. What we did see is how little control she has of her life. What we're seeing is how she's been spoken to and manipulated and how that is manifesting in her actions towards Mike. We don't have the full story about Sandy. We do have the full story of the rest of the cast. Sandy herself is still very much a mysterious character and so are her circumstances.

NOOOO MIKE NO THAT WASN'T THE POINT, stop apologizing she wasn't trying to guilt trip you imo :") (as a fellow airhead who dated someone with a controlling mother. I never ascribed any malice to Sandy's actions but M and S both need help and therapy to realize what needs fixing.)

She wants u to share ur feelings so pls do it. Even if it means saying you don't want to date her anymore. Please Mike. Please

Way to mix your signals there, Sandy

Honestly I really like Sandy simply for how much impact every single one of her „appearances“ and speaking lines pack… for better or worse, lol. I‘d sooo love to get to know more about her, her own perspectives, I still really love that one chapter from her POV. I wanna see more of inner Sandy thoughts. (Does Sandy think at all these days? You just dunno with these chapters lately!!! JK even though she‘s obviously super superficial, I think Taeshi is extremely good at giving her depth as cat with her own feelings and inner world - if this makes sense.)

It's reasonable to not want to be yelled at but sandyyyy right after you said he should be madder..... you know what mike is like...... or do you idfk

Also that 0 remorse about yelling at him first at their 1st date in 100 years, lmao

Once again, more imagery with that scarf making me concerned for Mike's mental state. Two things immediately come to mind, and I don't like either one. Please let me be wrong...