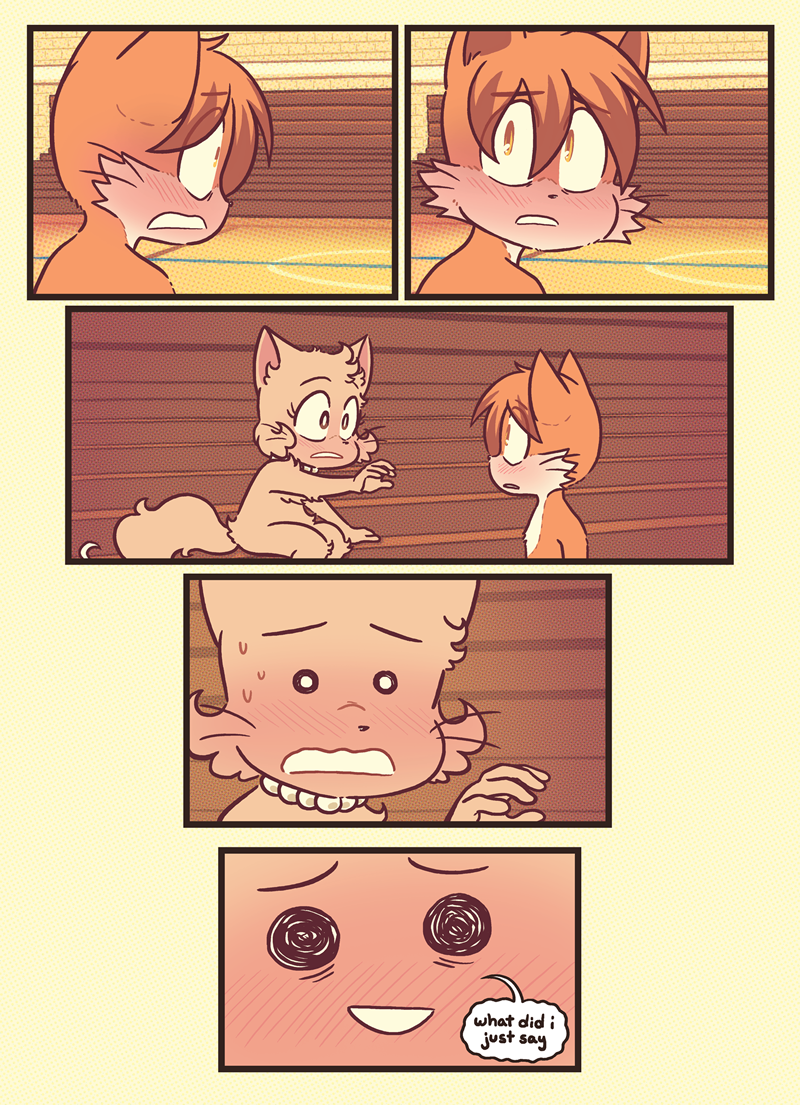 Veronica: Everyone is just turning into a tomato here

No more closets. Ever.

You said Paisy is hecking dead

LOL you know what? this makes so much sense as to why she was so fascinated by Paulo being bi. not like she wouldn't support him either way, but it's SO EXCITING to have queer friends long before you come out or even realize you're queer in the first place. I would ask my bff all about being trans All The Time for months until I finally put the pieces together lmao

Don't deny it Daisy you knew what you said! Don't run away from your pride!

That final panel needs to be a chat sticker.

lol taste ur own medicine daisy

Time to revisit the daisy Ships Ahoy strips... Hey! Did You Know that for the low low annual price of $29 you can access all Bittersweet Club International member-exclusive bonus comi---

This is so cute I'm dying

One kiss from Mike made her gay lol

Daisy is definitely more accepting of herself than Paulo, but it seems like even she was unaware of this.

When you're trying to reassure and connect with a friend but accidentally come out as same-gender attracted. :P

I'm all for them figuring theirselves out together

Perfect content for pride month honestly. I've always seen daisy as being pan honestly because of how she used to be super affectionate with all of her friends regardless of gender. Her pointed romantic affections were usually towards males of course, but I mean. Come on. Def feelings towards Lucy lol

Decades ago, the word was that every heterosexual person has a homosexual part of their personality. I don't know if people still say this. This old jag was once in both Paulo's and Daisy's metaphorical shoes. Hope that they eventually get comfortable with that part of themselves. It's part of growing up.

My actual serious comment: We are in 2009 in-comic, iirc. Being in the closet is always a big deal, but especially then. This is three years after gay s*x was federally decriminalized in the US and six years before same-sex marriage was federally legalized. I was also in the closet in high school in 2009. I'm glad BCB doesn't outright show homophobia but the vibes were.. rancid. Not that it's better now, just that gay rights were the national conversation the way trans rights are now, and that pulls out a lot of reactionary bigotry.

Girls? Plural? Well Daisy?? Which girls have you thought were cute?? Other than Sandy which is definitely a given imo. Give us the deets, girl!! Time for some introspection.

I'm thinking Tess and Lucy for sure, she sublimated some of those feelings into "jealousy" which is pretty common in closeted wlw in my experience.

That would make a lot of sense to me! Especially since she's so fixated on how Lucy has all the looks. I'd love to see this evolve into some real thought about how she's pitted herself against them. I'd do anything for a Daisy/Lucy moment but I'm just getting greedy now after all this Pride Month goodness.

hehehehe :3c join the club, Daisy~! pride month isn't over yet, and I came out circa 2012, like a couple years in the future.

paulo is probably more confused at what she said, i wonder what the track team are gonna say, since school stadiums have enough space to create an echo effect.

Paulo: You said you just saved a bunch of money on your car insurance by switching to Geico.

During pride month too?? Beautiful, amazing, my crops have been watered and my skin is clear

Oh, this solves a little mystery, I think! Daisy's an English nerd, right? When Mike said he thought Daisy was being jealous and she said he wasn't wrong about *that*... 1) she knows he meant envious, as in wanting what Sandy had; 2) she confirms that she was jealous, as in, possessive of Sandy. I thought it was weird phrasing before, like if it were normal it could just be "well you weren't wrong.." I dunno! Just my pet theory!