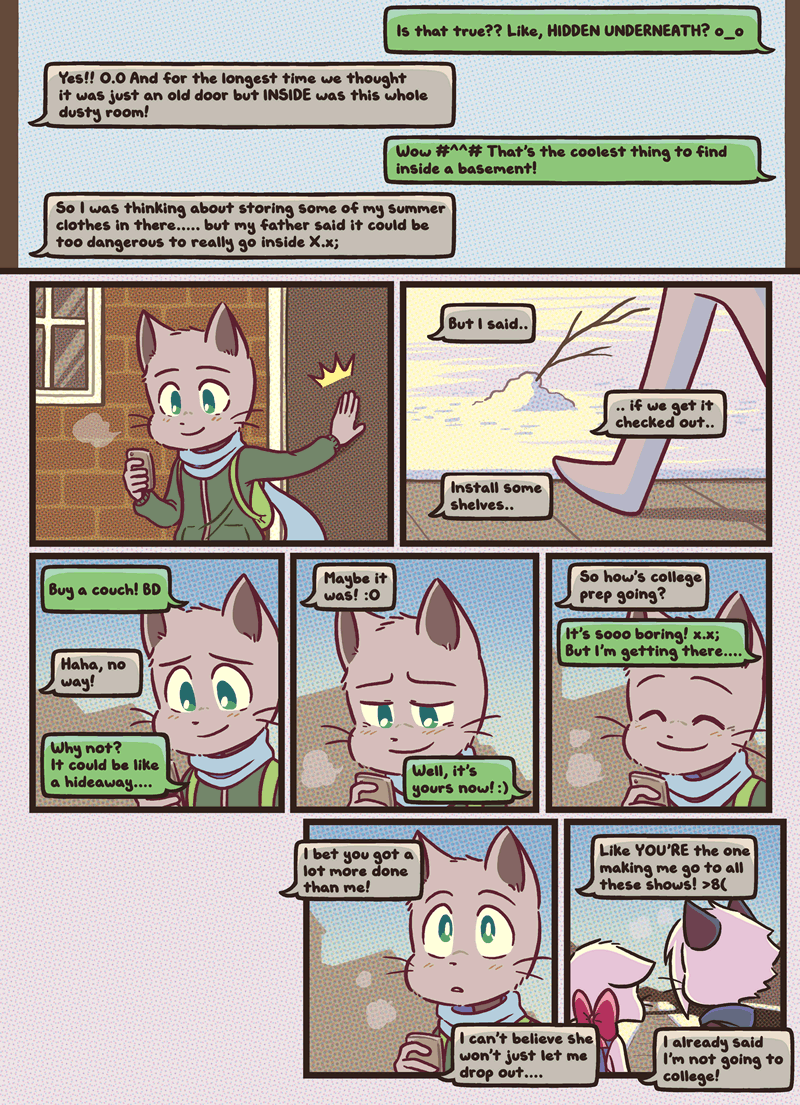 Veronica: HEY EVERYONE WELCOME TO THE NEXT CHAPTER!!!! Wasn’t the last story a fun one? :) This chapter is much shorter.. I don’t think we’ll get a beast like Double Down for a while, though I can’t make any promises..

Anyway let’s see how our favourite protagonist and his totally healthy fulfilling relationship is doing!

As much as I dislike their relationship, it's nice that they are actually talking

Mike: Good for you, college is for losers!

Sandy: Tell me about it.

I like how Mike looks completely guilt free even though he cheated.

Love the emojis. I'm concerned that Sandy wants to drop out of school. It's her mom's fault for putting everything on her plate. It's messed up to push your kid to this point.

yeah exactly, like I have sympathy for Sandy when it comes to school struggles and her toxic mother certainly isn't helping...

They're SO CUTE I hate how toxic they are!!!!

This text chain reminds me of when me and my best friend/ex-boyfriend are talking to each other and it fills my heart with the warm-fuzzies, but Mike x Sandy mostly sucks at this point so idk how to feel!! Looks like he's still sad to see Lucy, though

Also who tf is in track?? Lol I bet it's a metaphor or something

Track may be one of Jasmine’s several extracurriculars? But I agree- probably a metaphor as I do not recall any of the main cast competing in track.

Both Mike and Lucy always races on the track in middleschool so probably referring to that. As in they meet (last panel) and given how the 4 established characters right now is Mike and Sandy, and Lucy and Augustus, I'd say the "race" is comparing their relationships like Sandy as Mikes new Lucy and Augustus as Lucys new Mike.

Mike has such a cute little face. I want to pinch it

As much as I don't like their relationship I'm happy they are having actual conversations (I hope it's not just sandy side all the time) he does seem more happy but at what cost Mike? At what cost? 😓

I think "track meet" probably refers to how Lucy and Augustus hang out by the track all the time. They meet there so to speak LMFAO. I'm glad to hear more about Sandy on her end, I was actually surprised she hadn't already dropped out by then based on all the traveling she'd been doing

I wouldn't put it past her parents to have some sort of private tutoring and homeschooling set up for her!

I also bet that because her parents are upper-class (or at least upper-middle class) there is a huge pressure to have Sandy attend some fancy 4 year college just so it looks good to their friends.

I like the subtle storytelling where Mike starts zoning out and looking towards Lucy about as soon as Sandy starts opening up and confiding in Mike about more important things that he should probably be paying attention to the most if he were still truly invested in his relationship with her. I wonder if we'll get to see the tables turning completely with them now, with Sandy earnestly trying to make this work and Mike emotionally checked out and absent more and more.

Man, I really do pity Sandy's role in all of this. From what we've seen, she really DOES love Mike, and had she have stayed in Roseville, she and Mike would have just become a super tight couple. But her parents basically dragged Sandy away from everything she cared about, chose her career path for her before she even graduated, and she was effectively forced to try and make a long distance relationship last. (which is notoriously hard even for adults) It's hard to say she's blameless in all of the drama revolving around Mike, (Sandy did effectively ghost him while going to Francis for emotional support) but every time I see or hear her in this comic, I just cannot ascribe malice to any of her actions. She's trying her best to make things work in spite of her parents pushing her in ways that make it harder for her to do so. It is by no means an enviable situation to be in, and unfortunately at this point I don't see her being able to hang onto her old life for much longer. It's a really tragic path she's on, and I'm curious to see where it winds up leading from here.