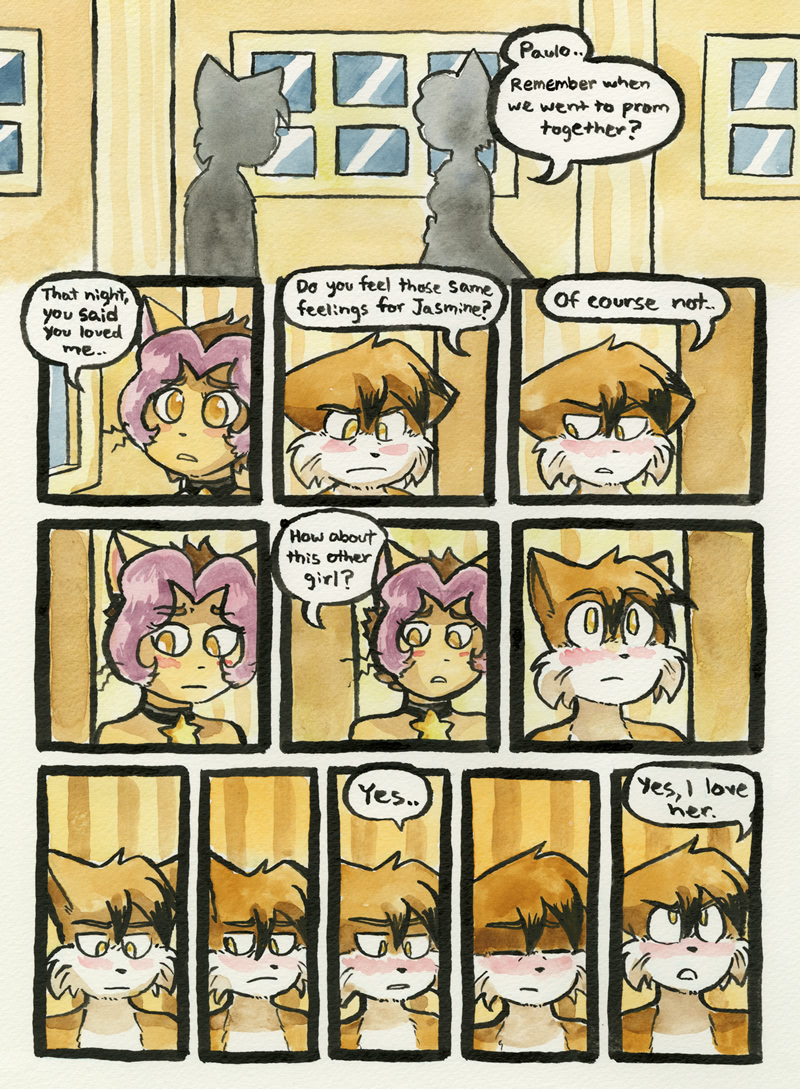 What is it with Ships being crushed in December? After I read last year’s December break-up I thought “well there goes my Battleship(MikeXLucy) but at least I got my Destroyer(PauloXJasmine).” Now this year my second favorite ship is taking hits. They were my second favorite even if I knew they weren’t meant to last. My Destroyer is about to be destroyed

. Oh well all good things must come to an end, even this comic which I had hoped would never end. At least I got my Cruiser(DaisyXAbbey) THEY BE CRUISING THROUGH HIGH SCHOOL WITH EASE. Yes that’s right i’m talking about a game I played once and relating it to a comic I read more than once, don’t like it DEAL WITH IT.

Side Note: I like how Paulo transitions his thoughts to get over his conflicting feeling and find truth in his heart. I wonder how Tess would have reacted if Paulo said yes, I love you.

@Ace: so i’m not the only one that thinks Paulo is going to dump Jasmine and go after Lucy only to have her say no to his confession of love, just like Mike did to her.

@Fenfir: Jokes on you, Daisy is taken. Also, he wouldn’t do something like that even if it was to spite Abbey.

I really, really think people are over estimating how much Lucy likes Mike. She adores Paulo. She really does. As coming from a real-life Tsundere, Mike is her damn best friend, people. Mike was there when others weren’t, Mike was there when others didn’t want to be, and that leaves an impression on your heart. What that person does, because I’ll hazard a guess all Tsunderes have that one single person, I know I certainly do, is so ridiculously over blown and important in your head. Perhaps not in a “omg, I lurve you way1!!1!” but in almost a glamorized sort of way. She lashes out because she cares and that is a special kind of scary. She lashes out because he has always been there and she just hasn’t learned any different. It is seemingly her only mode of expression.

However, the hurt that comes from the best friend betraying you is heart breaking in ways I wouldn’t wish on anyone, which we also see Daisy show a little because of Sandy just up and leaving, which lest not forget happened several, long years ago.

However, around Paulo? She acts like a person. She just isn’t a huge douche. She may roll her eyes, she may act crazy, she may beat him to a damn pulp, but regardless, she trusts him. For good reason, because we see time and again he really is just a good kid with an earnest heart. Like right here in this panel. I highly doubt he will break up with Jasmine on freakin’ Christmas. He knows that would be shitty, and I have a sneaking suspicion he doesn’t want to hurt Jasmine at all, since he hasn’t broken up with her yet. “They haven’t done any thing wrong, so why should we break up? I do like them, after all!” Oh, silly kids. I’m sure several readers have been in a spot like that before, too. I honestly think this will end well and with much less drama then every one thinks there will be. I’m probably wrong though, since these cats are draaaaaaaama even just eating lunch.

Oh, and for the record, I abhorred BcB forever. I was like, “what, cats? Anthropomorphic cats, what the heck man!? Weird.” Except then I started reading the updates every day, then reading the past comics, and it sort of landslided into an intense love for Tess, Paulo, Lucy, Daisy, and others. Except Mike, because he reeks of undiagnosed bipolar and several anger issues which need therapy to be addressed.

So there you have it. Thank you Taeshi, you made a really neat comic. I draw as well, so if you ever want to paint chat, feel free to hit me up. I’m not very good, but I enjoy drawing fat animals, so there is that.

Well, that is my text wall of a comment. It is 4am and I am going to go snuggle with my fat dog named Hobo and my boyfriend now. Merry day after Christmas, every body!