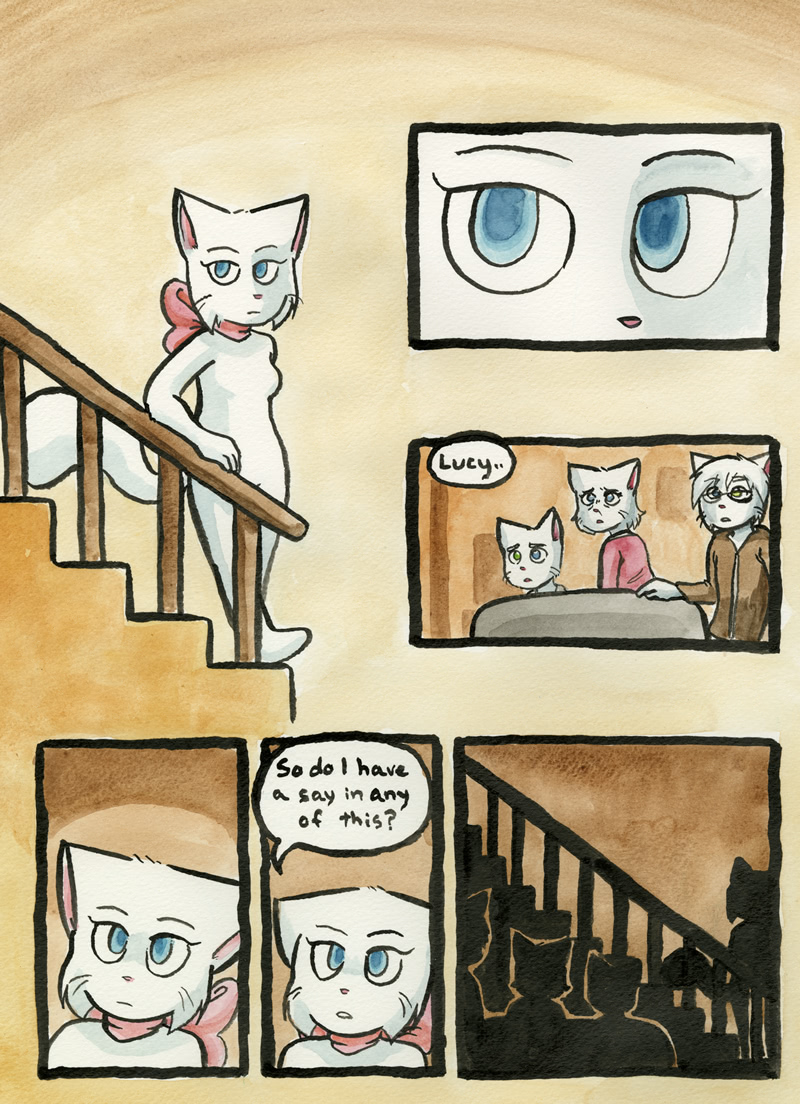 Veronica: You.. doing okay there, buddy?

A new year ushering in a new Lucy? Guess we’ll see. Even if she isn’t over it, it’s unlikely that she would willingly accept professional consultation. She is good at putting on a front, so I’d put my money on her making a case for herself being okay and for her family to chill out.

She has spent all this time isolating herself and sulking, you’d think she has at least thought about the idea of moving on from Mike. She may be an emotional train wreck and obsessive, but she certainly does not lack in willpower or intelligence. She can take care of herself and I’m sure she will convince her family to trust in her ability to pull through this on her own.

I look forward to seeing a revitalized Lucy in the near future.

Hmmm… i was just wondering if Zach is going to show up soon? Remember his promise “If anything happens, ill be there… somehow.”
Just remembered that.

After a year of watching this situation stagnate I’ve moved from the “Aw poor Lucy!” circle to the “Get over your melodrama” camp. Mike and Lucy aren’t friends anymore. We get it. It sucked the way it burned down so violently in the end, but it’s time we advanced the story-line to something other than “Lucy is sad”. If any of her friends knew she was hurting like this, they would offer their immediate support. Paulo reached out to her, and she barely made small talk with him. Augustus was more blunt, but offered helpful advice nonetheless. All this to no effect. Lucy became a recluse. She’s abandoned her friends and refused their help. Apparently, Mike was the only one who mattered to her. What a shame.

This story could have been much more interesting if it were allowed to develop. We could be seeing infighting in the group as they try to pick sides between friends they both care about. Hypothetically, Daisy will suddenly decide she hates Lucy if only to keep Mike which will make Abbey all sorts of conflicted. We could see Paulo actually getting into a fight with Mike over what he did to Lucy. This could cause Jasmine to get jealous over Paulo being so passionate about another girl. Or maybe some less obvious developments would occur. Who knows how some characters would react to the prospect of the group disbanding?

Or, perhaps we could go with the more realistic scenario where Lucy goes through some major character changes and becomes an Ice Queen. She gets better, but loses all the dere in her tsundere. No passive aggression, just outright misanthropy. If her best friend abandons her, then screw needing friends. It’s better to be feared than loved, right?

Instead we just keep the status quo of “Lucy is sad”. I was certainly expecting some interesting plot developments since last December, but nothing memorable has happened. It’s all starting to feel overplayed and fabricated. It’s hard to sympathize or identify with a story that has no flow. There’s no arc here. No rising action for this to get even more dramatic, and it’s not falling to a resolution. They story arc has effectively flat-lined for a whole year. So forgive me if I’m not overcome with manly tears over how “empty” Lucy’s eyes look on this page. It’s a detail that’s inconsequential to the plot, just like every other detail we’ve seen this year. Here’s to hoping this comic gets a defibrillator next year, because it sure isn’t going anywhere.