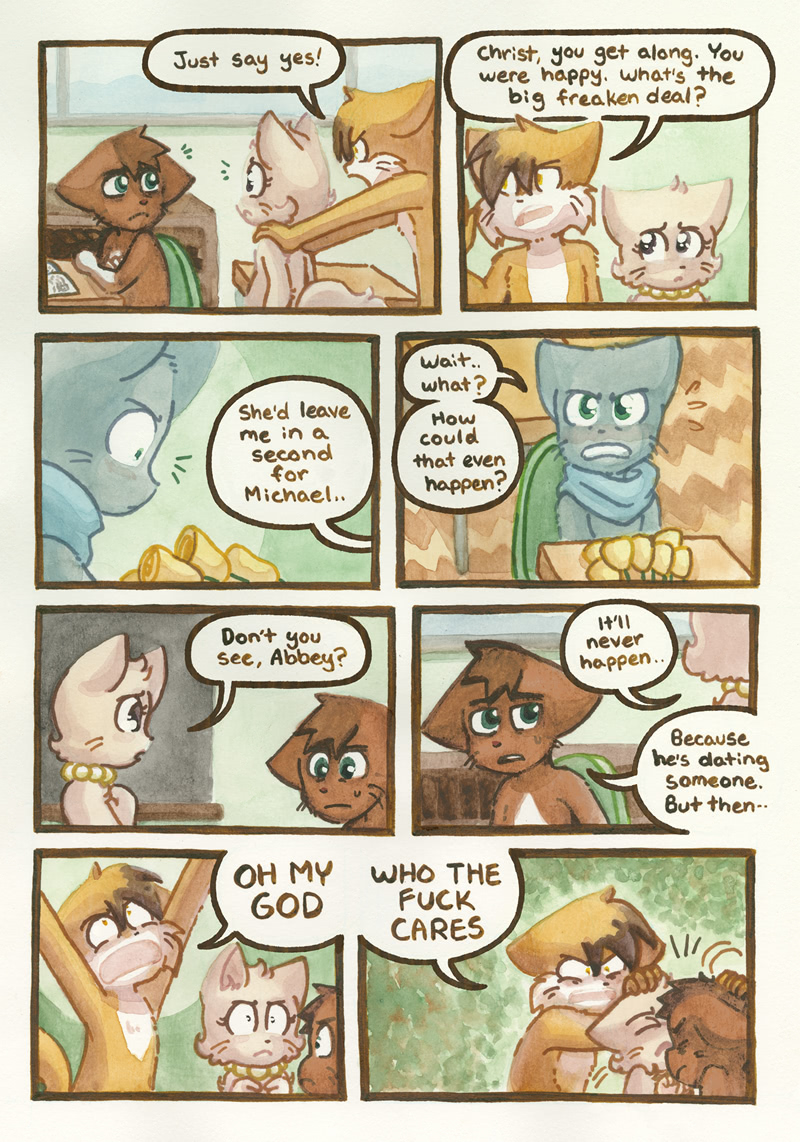 Oliver: Do your job, Paulo.

Big week ahead for us. Anime Boston this weekend!

But today we also wanted to point you to two Kickstarter projects we’re currently backing that are soon to end. First, Band Vs. Band, the visually fantastic throwback to an era that probably never happened. I have no doubt this book will be super impressive. Second, there’s Lighter Than Heir, a second attempt at funding a first volume which is now.. already funded! This is a fun, engaging story in an imaginative world, and we know a lot of readers are fans. Help Nalem along with a few more pledges, she deserves the success!

Those of you who say Paulo is making himself look like an ass, thanks for pointing the obvious. Thing is he is willing to do that for Daisy. It shows how much he cares….for her anyway

besides if he doesn’t interfere the two won’t ever make up their minds and stay split up due to uncertainty.

In other words, he’s being a brother. The same he always was with Daisy.

Here we see once again how far Paulo and Abbey are apart on how relationships should be…Paulo is more for the “enjoying the moment of the relationship and dealing with the eventual future problems later when they actually are problems” type while Abbey is more the “planning ahead and worrying heavily about potential problems already way before they could occure” type.
Both of the point of views have their good and their bad side and i can understand both in a way.
Paulo would be a (maybe too) good older brother

But Abbey is not gonna make compromises here, he wants all or nothing. And on the othier side if daisy had tried nothing to win him back it would have made an hard impact on him as well, as it would have proven to him that she “does not care” enough.
I really respect Taeshi for showing how different the views on relationships can be (which one may be the actual “right” one is up to the viewer).

None of them get what he means. She accepts that Mike will never love her that way, but regardless of that fact it’s clear Daisy still has some feelings for Mike rather she wants to admit it or not. And IF Mike wasn’t dating Sandy, IF he showed even the slightest affection towards Daisy that isn’t “sister-like”, she would jump on that chance. Which means there really isn’t any room for Abbey in her heart. She cares for him deeply but you can’t “Really, really” like someone in a serious relationship.

If you’re casually dating that’s one thing, but they broke-up. It’s Spring now meaning by the summertime it would have been a whole year since they decided to get together. And Abbey knew what he was getting into and he sees now that he still didn’t change her mind from “New Beginnings” so he’s choosing now to bow out. Which on his part was mature but they’re still not communicating their feelings. Abbey is making it clear how he feels but he’s not giving Daisy a chance to explain herself and her feelings but Daisy is just flat out ignoring the problem and isn’t really trying to understand Abbey’s feelings either. And Paulo, who can’t really get a grip on his own feelings, is just about the “now” (probably has to do with him missing his chance with Lucy) and isn’t really thinking about the facts of the matter which is 1. That it’s almost been a year they’ve been together and there hasn’t been any progression outside it being “nice” and “fun”, and 2. That Daisy still has feelings for Mike, and he is just forcing things that are simply not there.

And though I agree with the people who say they’re in high school and that they’re young and don’t really understand their feelings. They are still feelings. And rather it’s love, hate, depression, happiness, etc. they are REAL feelings that they are experiencing.

And no Daisy isn’t selfish. She can’t help how she feels. I don’t blame her. But she is wrong for trying to push Abbey into relationship that he DOES NOT want. And Abbey isn’t being selfish either. He FEELS the way he wants to FEEL. And if Daisy doesn’t return his feelings why force it? I think his paranoia that she’ll leave him for Mike is a problem though. Seeing as she could leave him for anyone if she wanted to.

Drama is unavoidable with this group of kids, really with any teenager drama is unavoidable but I hope they can come out of this as friends. I’m getting all emotional and this isn’t even real. The situations are real, but still at the end of the day it’s a comic that just hits a little close to home. Sorry for the rant.