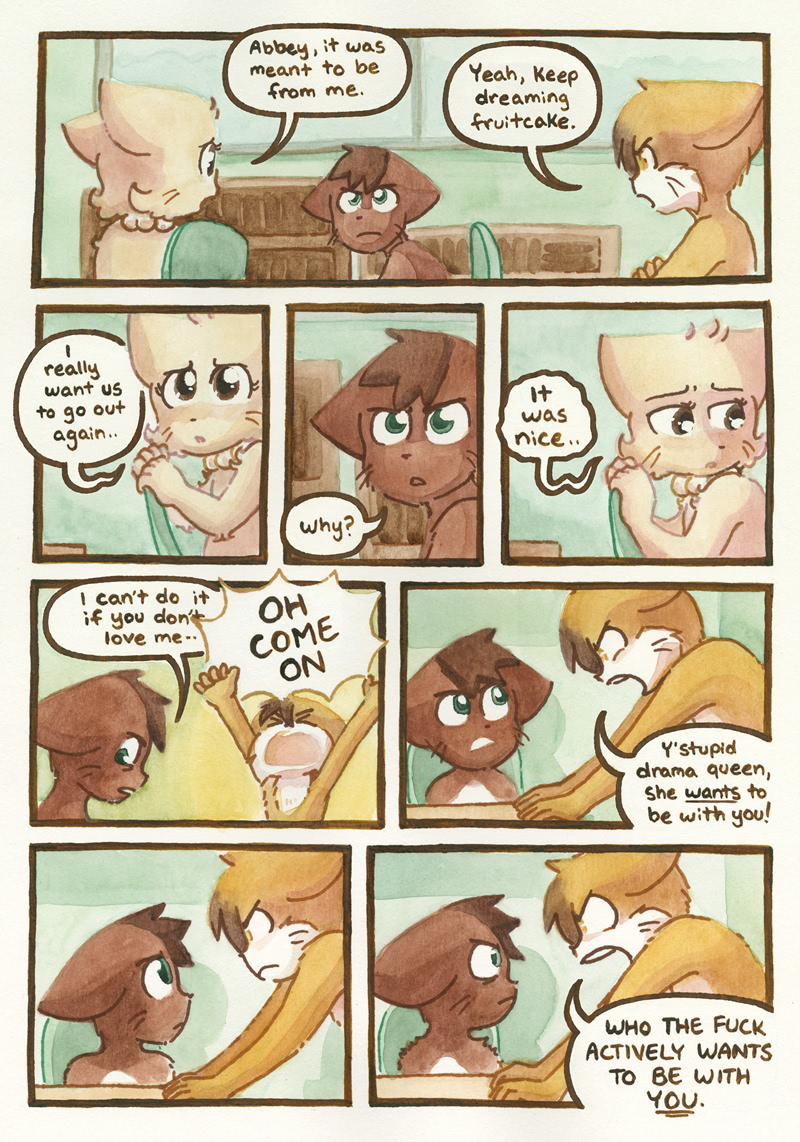 Veronica: I’m sorry, this page is extremely funny to me. Paulo is so upfront about how little he respects Abbey, and it’s not like Abbey respects him back!!!

I know he’s being very awful, but the last panel gets me every time lmao this is the kinda dialogue I love

Because everyone HAS to be in a relationship at all times, right?

Even though they’re teenagers, I think Abbey kind of has the right idea about this. If after a year of devoting yourself to someone you get nothing better than what you started with in return, it’s time for both of you to move on. Both Daisy and Abbey have specific ideas of what they want in a relationship, and neither fits with the other’s vision. Maybe in a few years after there has been time to mature the two of them would work out, but as it is right now it is unfair to say that either of them has the bar raised too high. Their bars are just on opposite sides of the solar system.

Honestly I think it’s best if Daisy and Abbey don’t get back together. At least not yet. We all know that Daisy isn’t completely over Mike even after being with Abbey for a year. She hasn’t developed any feelings for him other than really liking him. And the fact she only said that it was nice when asked why she wanted to get back together doesn’t help.

Abbey loves Daisy or at least has stronger feelings for her than she does for him. He feels second best compared to Mike and frankly it’s not fair. He shouldn’t force himself to stay in a relationship with someone that might not developed any deeper feelings for him in return. He wants someone to love him in return and there is nothing wrong with that. In order for this relationship to work both people need to be on the same page when it comes to what they want out of the relationship.

A lot of people mentioned that because they are so young the relationship shouldn’t be taken all that seriously. That it should be more casual and to expect love isn’t being realistic. However I don’t believe in that. Yes they are both young, yes it isn’t always realistic that you’ll end up marrying the guy or girl you fell in love with in high school. And yes a lot of high schoolers probably do go for a more casual relationship. Yet not all of them do. For some people whether young or old casual relationships don’t always work for them and they may want a more serious relationship. Especially if they developed deep feelings for the person they are with.

It’s clear that Abbey wants a more serious relationship and if Daisy can’t give that to him then they shouldn’t be dating. At most they should remain friends if possible because Daisy does care a lot about Abbey and has helped him in the past. Daisy needs to understand that as long as she’s harboring this crush on Mike, doesn’t return Abbey’s feelings to the same degree or even come up with a better answer as to why she wants to be with him then it isn’t going to work out. It won’t be fair to either of them and it’ll only cause more pain in the long run. Maybe they can get back together one day but only if they can sort things out emotionally. Until then Daisy should just hope she can be Abbey’s friend. Although… considering what is happening now it’s hard to say how that would even go.

The real stickler here is that this really does go to show how little thought or time Daisy actually put into putting this right.

At which point in her post “breakup” talk with Abbey has she actually really considered his feelings? So far she’s been upset that he’s made that decision, and then decided to to make the argument for the relationship…for which the only argument for she has is “well it suited me fine!”

It doesn’t seem to have registered a jot to her that her actions caused this, or what she did was actually bad. It’s a shame, because I did kind of hope Daisy would at least stop to really think over her feelings before acting, but she didn’t at all. She consigned the job to Paulo, wimped out on the flower, and didn’t even stop to consider what she would even say to Abbey once she got her chance. If she’d mulled this over, I’m sure she would of realized how awful and selfish the answer she gave right now is.

Also yes, Paulo has no place sticking his nose in at this point, helping a friend is one thing. He meant well, even if he was only putting in the effort for Daisy’s sake. But to get in Abbey’s face like this and to go as far as to suggest nobody would want to be with him is stupid and rude. He doesn’t know the relationship like the couple do. Friends should only ever be involved to help the half they are mainly affiliated with, when you start attacking the ex based on just what you know, or what your friend told you, then you are not helping, in fact you are most likely making the situation worse than it needs to be.

I suspect Daisy is going to learn the hard way that breakups really really suck, and it’s only going to get worse now that she’s inadvertently sic’d Paulo on Abbey. Because that ultimately will look bad on her, and sure isn’t going to make Abbey any more keen to discuss any potental future. Not when her answer to “sorry I want out” is to act out like this and potentally cause a fight Abbey sure wasn’t asking to be involved in.

One hopes he has at least enough willpower to simply shut Paulo down with a retort or leave the room, rather than resorting to any physical solution that may only make things worse for him.