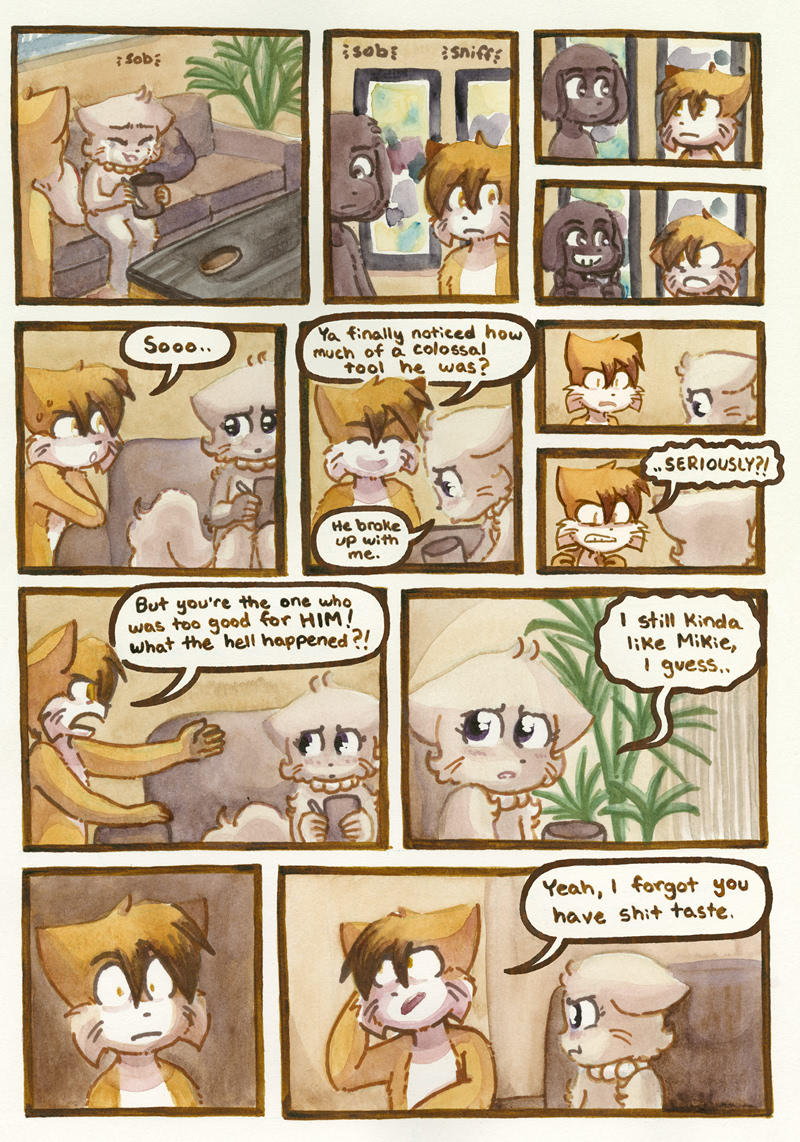 Veronica: Souppy is having surgery today so please wish him the very best! He changed the store as well and has been working super hard on helping the comic grow, whether it’s through website work or helping me with dialogue changes. He’s one of the reasons BCB became so successful and I couldn’t have done it without him ;__;

I hope he has a safe and speedy recovery, it’s not a big thing. But it still hurts to be opened up!! Give him well wishes, if you can draw him get well things (PauloxDaisy/MikexLucy are things he likes lol), anything to give him support! I hope he is able to wake up to a nice thing!!

Get well Souppy, and enjoy plenty of ice cream after the surgery, or popsicles if you enjoy those more.

1) So happy Daisy isn’t blaming Abbey. I mean, as happy as you can be in this situation.
2) I find Paulo’s behavior effective. What Daisy needs to get into her head is that Mike is a bad match. If the problem is her taste, she can try to shed that affection from the inside. If the problem is that he’s handsome and perfect with a long-distance girlfriend… you see the difference?

Good job Paulo, even if you’re probably just acting how you would regardless.

So many overlaps here.
This reminds me of my high school days when I read/followed over 10+ webcomics (just four now), and when I was really into BCB.
I remember reading the “another path” chapter, where Paulo consoles Lucy, who tries to have sex with him and he resists (or maybe that was another chapter, I just know there are two similar ones; non-cannon where they have sex and cannon where they don’t).
Seems like the same set up could happen here. Daisy just got turned down by Abbey, just like when Lucy got turned down by Mike, both of them are emotionally distressed and Paulo has to make it better.
I don’t think Paulo is going to “go for it” as David puts it. If he could resist banging an emotionally distressed Lucy back then (who he is super hot for), I am pretty sure he can stay clear of doing up Daisy (who is much younger and like others say, a younger sister to Paulo).
When Daisy admits she still “Kinda likes Mike”, the next panel with Paulo’s stunned face makes me think he’s going “Well that’s okay, I still kinda like Lucy”, in that they both have been with other partners, but still obsess over the “One” they can’t let go.
Paulo being very frank as usual on the last panel and as someone else commented, Daisy does like Paulo, which makes the comment funny. However, I don’t think Daisy has “feelings” for Paulo, she just likes him like a friend.