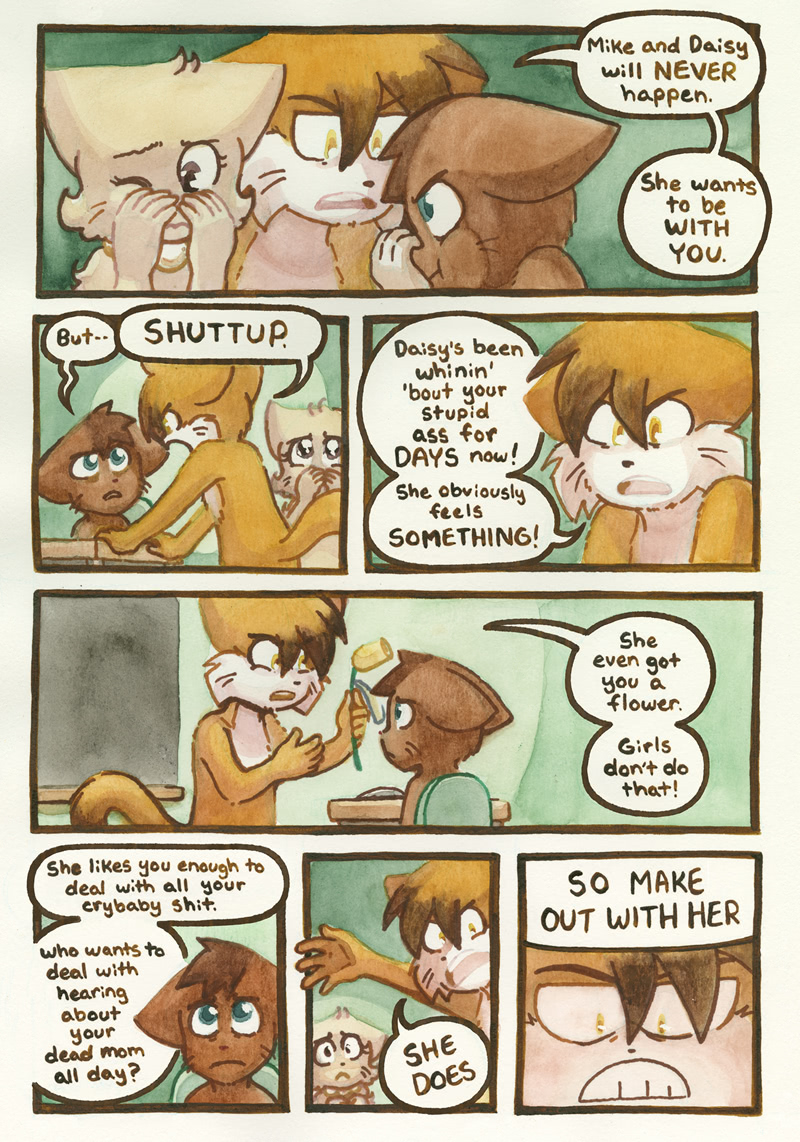 Paulo is an absolutely tactless idiot. Not only is he not giving Abbey a chance to talk, not only is he completely biased about this whole damn thing, he has the nerve to say that no one will ever love Abbey because of the emotional turmoils he has to deal with, and for that reason, he should settle for being Daisy’s back up guy. Gods forbid he actually ends up with someone who actually loves him.
“She even gave you a flower. Girls don’t do that.” Yeah Paulo, girls don’t do that, and even if they do, Daisy certainly didn’t. It was your idea to do this friendship rose thing, and what do you know, she couldn’t even bring herself to send a rose to the guy she wants to be with so much. Prior to all this, Daisy and Abbey (or Dabbey if you prefer) were my favorite pairing, but now I’m quite happy its done. After the life he had to live, why should Abbey have to settle for anything other than the best? Because Daisy thought it was nice? Because “You’ll never find someone who wants to deal with that?” Yeah Abbey, live your life being a co-dependent person whose only satisfaction can come from satisfying someone else, whose only reason for looking for a relationship should be, “Well she’ll be there for me when I’m having a hard time.” And by all means hope, with all your heart, that for some reason she won’t ditch you for Mike or any other guy who gives her a bit of attention.

Paulo of all people shouldn’t even have a thought in all of this, but he’s so damn impulsive that he hasn’t given things a second thought. “Let me try to make Daisy happy,” he says while not being real about his feelings for Rachael; while breaking up with Jasmine because he “loves” Lucy, and hurting her soon after when he sleeps with Rachael. I mean gods, was he not too long ago, getting upset with Tess because she didn’t want a legitimate relationship? And if by chance, Paulo did think about Abbey in any of this, then that means that his whole reasoning is that Abbey can’t have anything nice, because he’s still “damaged” from his childhood.

I hope with that Abbey doesn’t submit to any of this senseless bullying. Paulo isn’t remotely right, and I have no idea how anyone can agree with him.

On a side note, kudos @Taeshi. You have made a truly engaging tale.

Paulo is somewhat emulating Lucy in the sense that he truly cares deep down, but also feels obligated to put a spin on his words in a way that don’t cast him in a light as being perceived as soft or effeminate. It’s been a blatant fact that he lacks confidence in himself. By being crude and untactful, he is just masking his insecurities. Same with Lucy. Maybe that is a small part of what attracted him to her (besides the bod); he sees a little of himself in her.

You know, I like how the previous comic ended without actually answering Abbey’s assertion. I didn’t miss it. The fact that Paolo decided to be a loudmouth at the last second doesn’t really change the fact that if Michael wasn’t dating Sandy, Daisy would still be considering a possibility with him, and Abbey would still be second fiddle. If Michael expressed interest in Daisy, she would leave Abbey to pursue it. That is a serious problem, and Abbey is right to be concerned about it. He got out of the relationship, and in my opinion, he should stay out and find someone who isn’t still pining for someone else.

Her statement is that Abraham is not to be worried because Michael is taken and doesn’t like Daisy that way. Except that just makes it sound exactly like what Abbey is worried about - that she’s dating him because she can’t have Mike. That is not okay. The issue with that is quite simple: if Michael DID express interest in Daisy, she would drop Abraham in a heartbeat. If Michael suddenly became single, Daisy would try to find some way to attract Michael’s interest.

If she were handling this correctly, she would tell Abbey that she wants to be with him regardless of what happens to Mike - namely, that whether Mike expressed interest in her or not, she turn him down because she wants to be with Abbey. Or if Michael were single or not, she would not try to attract Michael’s attention because Abbey was more important to her than Mike any day of the week. That’s what she should say. That she isn’t saying that only proves her lack of resolve on this issue, and that she still likes Mike more than she likes Abbey.

And if she likes Mike more than she likes Abbey, THEN SHE AND ABBEY SHOULDN’T BE DATING IN THE FIRST PLACE. It is literally that god-damn simple.