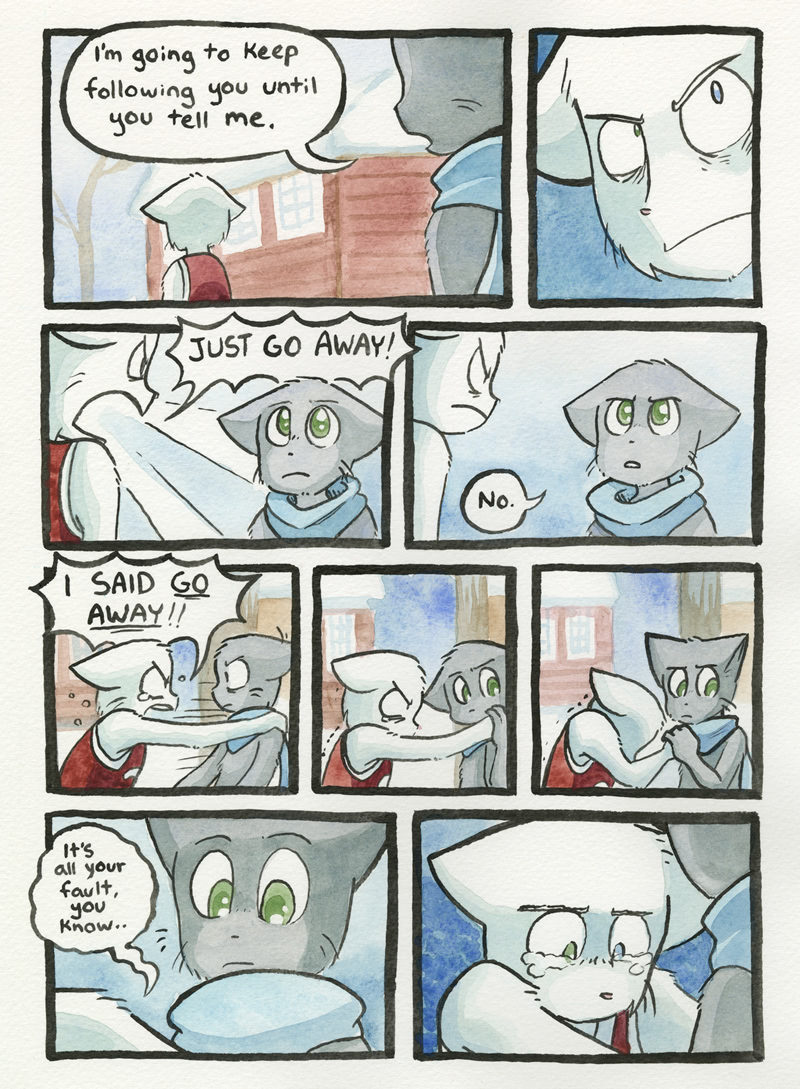 Veronica: C’mon, Jordan, you’re a basketball player. Surely you have some good reflexes!! Don’t let Mike make a fool of you!

I don’t think she’s dead… But it’s obvious she’s not with the family right now, and likely won’t be for the foreseeable future. Sadly whatever it was that happened, I’m sure, stemmed from that fallout Mike and Lucy had.* It’s quite obvious she’s been- for the lack of a better word- broken, ever sense. >.>

For the Record, I am NOT a Mike Basher, and while I will readily admit that he should have handled it better, I’m not really sure that he could have. Remember- he’s a teenager- one who’s had his own relationship and feelings thereof trivialized for the sake of the girl he got saddled with and treated him like dirt for years. Another thing to note is that he is not a reader, in that he doesn’t know of Lucy’s backstory, nor of her softer side she only shows to her pets- like we do. Let’s be honest, that’s the only reason why she’s as sympathetic as she is- if our gracious artist here neglected those scenes, you would not be as half as mad over that as you are now. As such, to him, she’s always been the thing that wouldn’t leave him alone. Again. He reacted badly to Lucy (from his point of view) randomly saying she loved him. Honestly, As brutal as it was, I’d be lying if I said it wasn’t a long time coming.

9.9 >.> Sorry if this is late to the party, but I had to get my thoughts on that matter out. The TL:DR version: Look at it from an abused teen who’s had his own feelings tossed aside for a girl, who treated him like dirt, for seemingly no other reason than that she was there.

“AWW Look at what you did Mike. You made Jordan cry.” ~ zxc
Actually, I’m pretty sure nobody is capable of ever FORCING someone to cry. Don’t make this more dramatic and overblown than everyone already is.

“… you seem to ignore the fact that Lucy’s older brother shatters to pieces in front of you? Ignorant little…” ~ Strawberryblossom
We haven’t actually seen Mike’s reaction to Jordan’s breakdown yet. The last face we see of Mike in this page is him being surprised. (Surprised of what, though? Not enough information to make a good conclusion.) After that expression, Jordan started breaking down. So I repeat, we don’t know how Mike reacted to seeing Jordan fall apart.

Honestly, I agree so much with everything MC said. Mike is dealing with this badly, but he IS a teenager. Sometimes I think we forget that he’s only fifteen, dealing with all the emotional problems that a fifteen-year old can have. He’s been abused physically AND emotionally by Lucy for years now, and now that Lucy is getting a little of her own medicine, she falls apart and doesn’t know how to deal with it herself, thereby involving her family in it. I’m not blaming Lucy either, though. She’s a teenager too, and she just didn’t know how to express her feelings.

Basically, this entire comic is an ode to the blatant lack of communication and maturity in society these days. Take a leaf out of Taeshi’s book; don’t be stupid with your emotions.

All this Mike hate is hilarious. You all assume that him blowing up on Lucy is to blame for this. How do we even know she told her family about the incident? Fact is we don’t, and until Jordan spills the beans next page we won’t know anything.

Jordan breaking down like this is sad, but it seems to me that he needed to open up to someone. You can’t just hold in emotion and expect it to end well. Very excited to see development of a character we see so very little of. I’m neutral on the whole issue of Mike love/hate, so I can’t wait to see Jordan’s side of what’s going on. Mike finally trying to make up for a mistake should finally give real fuel to the debate on whether Mike was truly being an arse, or just standing up for himself. Stellar writing as always, and I’m glad we’re getting more pages now for further character development.