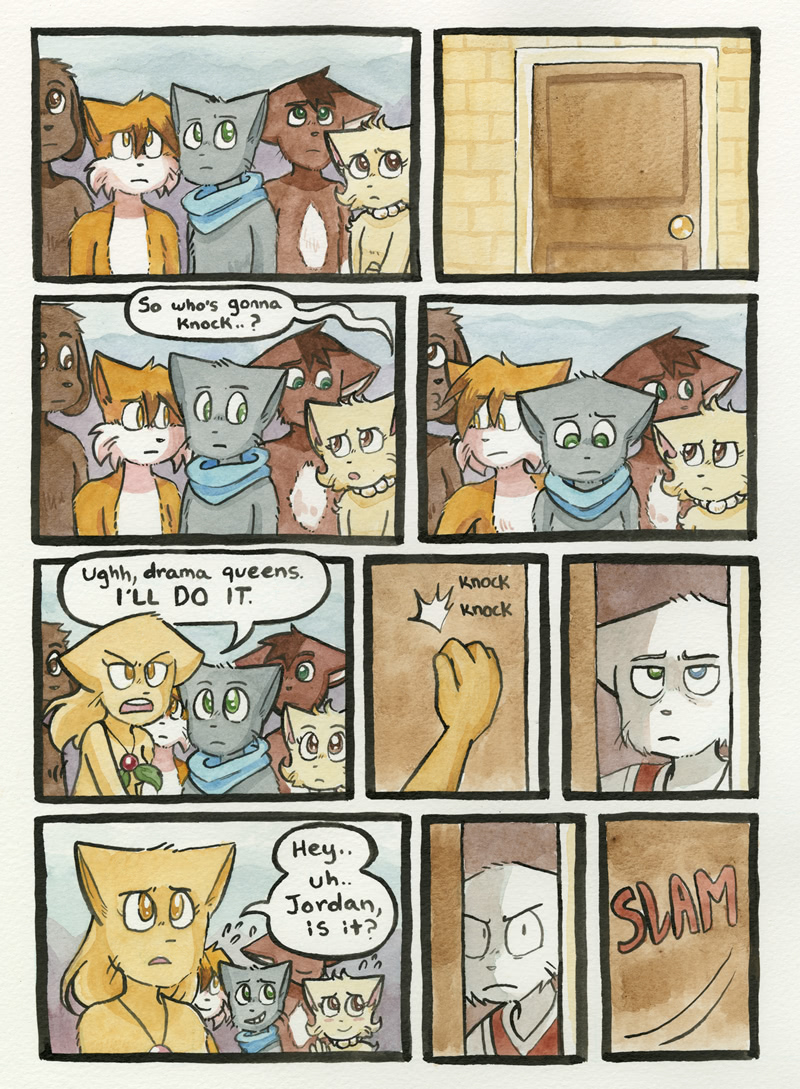 Veronica: I really like this page, I felt very pleased with the way it came out. So many nice warm colours and they all feel in place, like Mike doesn’t stick out weirdly even though he’s blue compared to the others, and the background has a blueness to it, it’s just a good page!!

Thanks for being extroverted, Sue!

C’mon, Jordan, they obviously care about her if they’re coming to check up on her. He could at least ask Lucy if she wanted to see them. I’m sure she wouldn’t mind talking to Sue! I know he’s trying to make a point, but I think words would be better than door slams.

At first, I was a bit peeved that Jordan just slammed the door on their faces. But then I thought about it for a bit; he knows his sister has always had some trust-issues (or was semi-conscious of them), he knows she’s been down and finally hit depression after a while, and he also knows of the group of people, OR SOMEONE, that is most likely responsible for that. He doesn’t know who, but he’s aware that its sent his family into endless worrying over Lucy, and that whatever happened has not gotten better.

And then, after whatever action they took has happened, people finally come and ask what’s wrong. He’s probably wondering “why do you come NOW if you really cared that much? Why not before she got worse”. It could’ve have been handled better, but for trying to protect his sister from people that he’s unsure of, I applaud him. And although Sue and David are the ones who are furthest away from the loop, I also have to applaud Sue for taking initiative, in comparison to the gang… though they could’ve just been too nervous to knock. Regardless, poor Jordan

Unfortunately, Lucy was already kind of a withdrawn individual, so the gang probably saw nothing out of the ordinary. At first anyways, then I think they weren’t sure how to go about the issue when they slowly started to. BUT that would probably only leave out Mike, who CLEARLY has an idea……. Mike, it looks like you’ll get your wish, but maybe not in the way you were probably predicting it to be at all.

I can understand jordan’s stand point in all of this because he’s a brother, and has a sibling who’s depressed. He feels the need to protect her from anything, and since he doesn’t understand who or really much why she’s depressed, he’s not about to allow others to come in and possibly screw everything up worse.
You saw how he was when paulo came to visit with cake. And in the end paulo snuck in to give it to her, so you can see he’s only being cautious since the last time someone came to visit her in this state purposely snuck in without warning.
There’s also the look of his own sadness in his eye’s when he firsts open the door, this is wearing him down, he can’t see what’s troubling her and put a stop to it. /Both/ of lucy’s siblings are very protective of her and it’s really sweet.