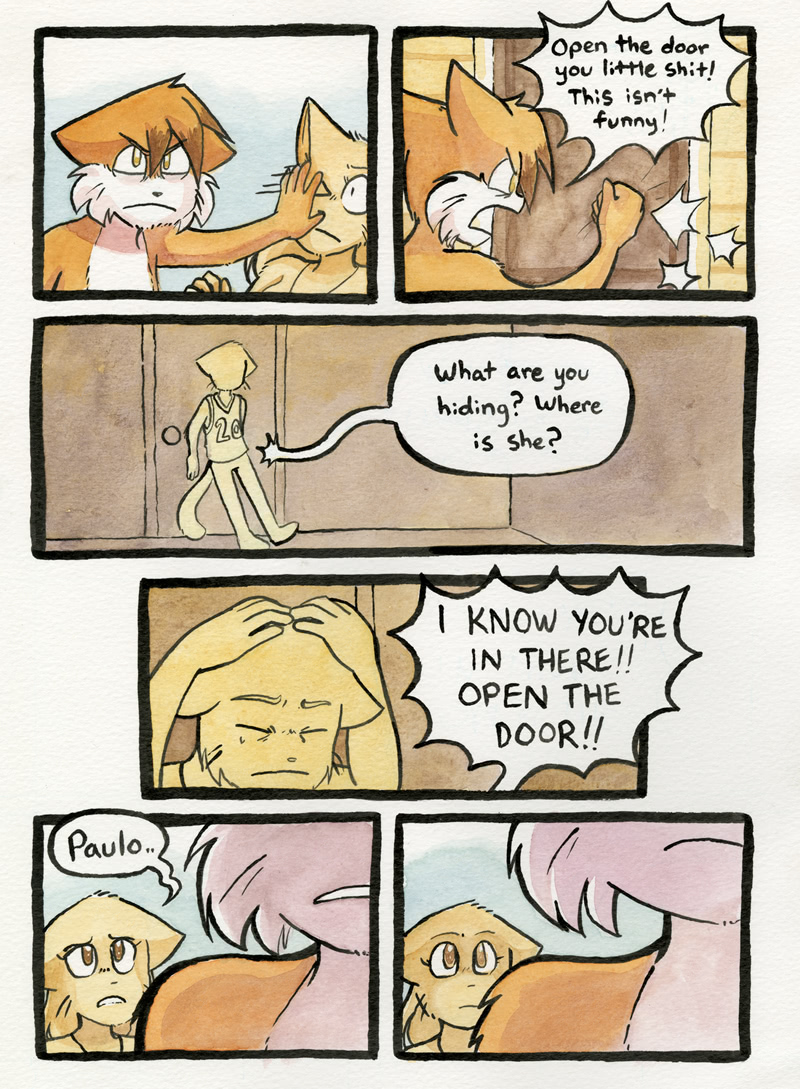 Veronica: it’s funny because jordan is older than everyone

I feel so sad for Jordan, he looks like this is hurting him just as much as anyone else. And he looked so tired in the previous page. He seems to not want to do this but at the same time he feels like he has to protect his sister. But he’s probably not even sure from what, or rather… whom. And no one here knows what happened to Lucy, except for our Mr. Oblivious Green-Eyes.

I kind of hope for Sam to suddenly stand in the door and either push the group out or just give them a quick explanation and that be it. OR JUST POINT AT MIKE AND SAY “ask him” (wishful thinking).
It doesn’t feel like Lucy is quite ready yet to talk with anyone… especially since she didn’t even tell anyone she was transferring. But I can understand why Paulo is pushing this.

I am rather happy that Jordan is trying to protect his sister. It’s not annoying. Lucy’s been hurt and he doesn’t know why, so he’s protecting her the only way he knows how. And, technically, he’s not keeping her friends from her. Judging from when Lucy came down the stairs to her family talking, she already knew what was going to happen. She had that time to talk to her friends. She chose not to.

I don’t get why everyone is attacking Jordan. He is only trying to protect his sister. We don’t know what Lucy told her family, maybe she asked them to keep her friends away. His loyalty is to his sister, not a random mob of kids that show up at his family’s door.
So he’s not doing anything wrong.

Also, I’m sure Lucy isn’t dead… or anything else that may permanently remove her from the plot. Lucy kinda is the plot. She’s a main a character, and this isn’t Game of Thrones.

Lastly, I hope Sam opens the door next and glares at everyone (with a focus on Mike, as if to say “I know what you did”,) or Lucy’s mom comes out and just makes everyone feel uber awkward.

Also, Paulo, it’s not a good a idea to start insulting a potential brother-in-law. Just saying.