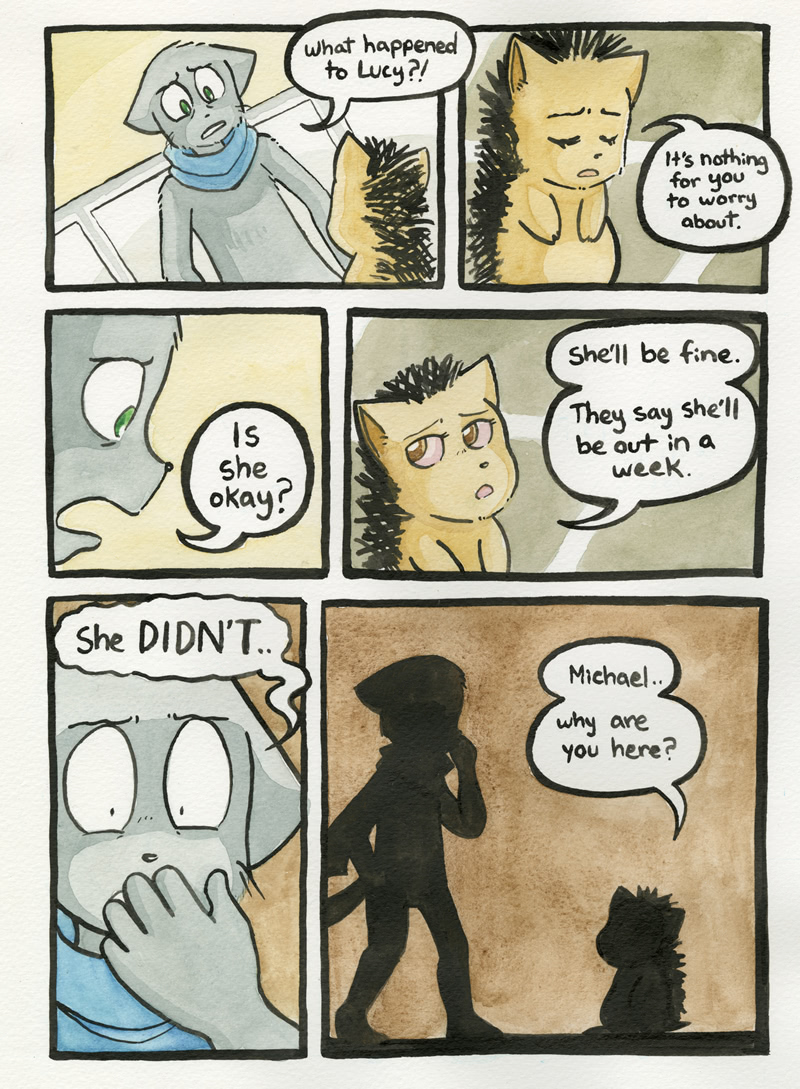 I wonder how Yashi is holding up. It makes me think she wouldn’t try to kill herself and leave Yashi and Chirps all alone. She knows how it feels to be abandoned, and I can’t imagine she could do the same to creatures who call her “mom”. With the bombshell Lucy dropped on her when she said Mike had a girlfriend, Yashi is already broken. Either she won’t forgive Lucy, or Lucy didnt try to kill herself.

Aggh, the facial expressions in these panels are just killer, especially Mike’s. It seems like he’s just realizing how seriously what he said could affect Lucy. Obviously, now that his head is spinning with horrible assumptions and possibilities, he’s worried sick.

The second to last panel is especially impacting. He has that sudden look of realization, like “oh my god, she might’ve tried to kill herself”.

We STILL don’t know for sure what’s wrong with Lucy. Some of the possibilities are that she harmed herself in some way, purposefully wasn’t taking care of herself or saw no reason too, or like the majority seems to believe, attempted to kill herself. There’s also the slight possibility that she simply injured herself by accident, ie falling down the stairs, but it’s doubtful since Lily is being so serious.

All we know for absolute certain is that Lucy is hurt (though she will be fine soon enough), her parents are worried, and her brother is pissed with Mike (so we can safely assume that Mike is the reason, or at least related to the reason why she is in the hospital right now).

And poor Lily as well. She must be more worried than Mike, and it has to be hard to be the buffer between Mike and Lucy. (also, her eyes are bloodshot, probably from tears and maybe even lack of sleep).

Everyone’s worried about Lucy. Several people are pissed with Mike. Lily just looks tired, like she’s already gone through that and doesn’t have the energy for more. Mike’s just beginning to realize that hey, maybe his words did more than make her cry or upset her. Maybe they poured acid into her insecurities and made her attempt suicide.

Mike’s confession and Lucy’s emotions are finally being brought to the front. This is gonna be so good.

I love reading the hate comments Lucy is getting right now. They’re just so outrageous and silly.

Here’s something you need to know about depression. When a person has it, they are literally unable to ever think of a time when he or she was ever happy. They don’t think of all the things they have because their state or mind prevents them from doing so. So if Lucy has depression (which I can almost guarantee she does at this point) then she can’t see any of the friends like Paulo trying to help or her pets or her family because her mind is so messed up that she physically can’t.

I also love the people that think her choosing to kill herself is like choosing which shirt she’s gonna wear for the day. When someone chooses to kill themselves, they don’t do it to make people suffer or as a cry for attention or whatever; they do it because they want to die. Yes, it might be selfish, but you have to remember that her mind is so messed up right now and that she isn’t thinking straight or seeing the big picture. At that point, it isn’t a cry for attention because she’s already tried getting attention, and since that didn’t work she’s just gonna end it.

Like really guys. Blame shouldn’t be thrown around at this point. This is all just a big mess of mental illness and serious business. Blame just gets in the way.

I’m honestly neutral on both Mike and Lucy. I just want to see the story