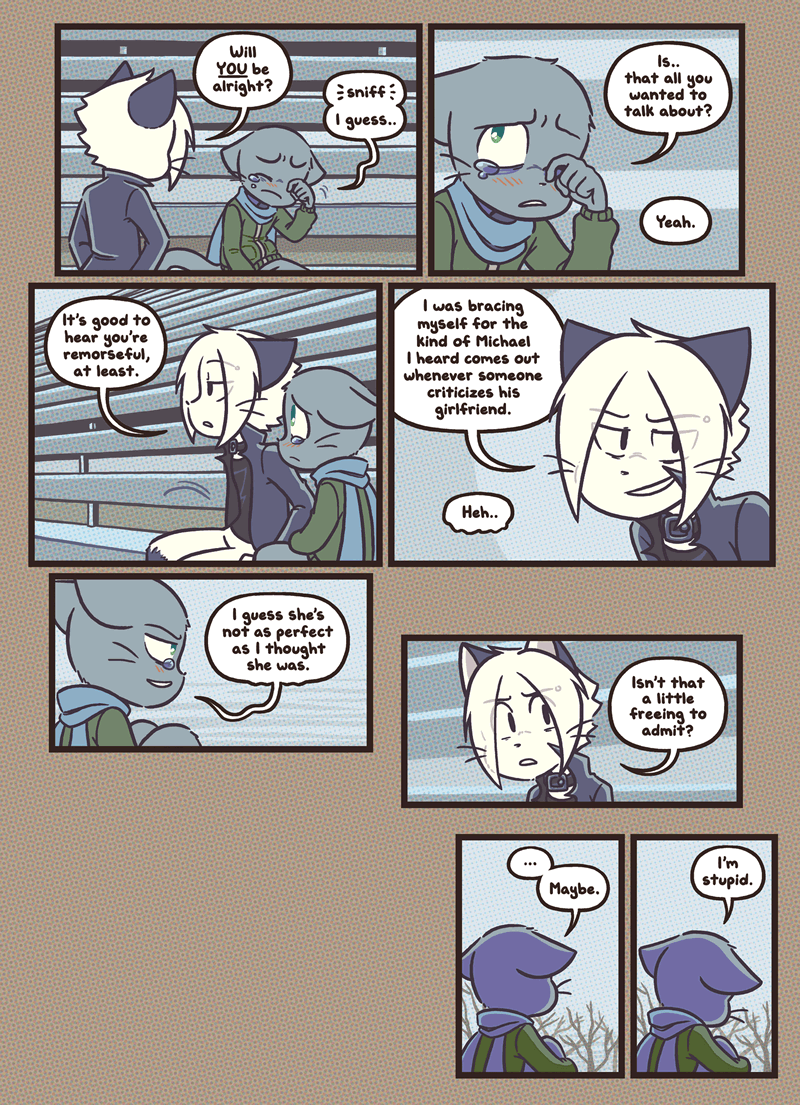 Yes you are stupid Mike. You’ve been defending a person who was slowly realizing that she didn’t love you the same way anymore and didn’t want blood on her hands so she gave in to the idea of being with you out of pure pity 🙃🙃

Mike openly realizing that Sandy is imperfect came at a hefty cost but it's one that NEEDED to be paid one way or another for him to finally start character development. Mike spent the whole relationship defending her horrible ghosting behavior under the assumption that she was just super busy with her amazing career. He pushed everyone else away who dared question her intentions and even burned the bridge with the person he cared the most about on the behalf of her.

But I am glad you came to that conclusion on your own, Mike, though it did come at the cost of making Lucy break down over you. And while it is an important step forward for you, what will you do next? Will you continue the relationship with Sandy in a sad attempt to retain what little you have left or will you break up with her and finally learn to be an independent person? You have the foundation to be an amazing person, Mike. Theres a reason why so many people liked you before you became super defensive over Sandy. You are holding so much of yourself back. Oh, and staying the hell away from Lucy is a part of you learning to be independent. Her business isn't yours. Don't get jealous if she hangs out with other people, especially Augustus. Don't think that she's trying to get back at you, and don't think that she ever owes you anything ever again. Blot her out of your life at this point, she deserves to heal from what you've done, Mike. Please, please learn to be independent.

There we go, I was hoping to see them meeting eye-to-eye on at least some of the problem here. Even if Mike messed up incredibly badly by taking Sandy back, it's really hard to see someone get into a relationship that's clearly hurting the people involved, probably moreso when they're aware of it being bad in some capacity.

God, August you are so perfect and grown up. Character development for the win. Best boi 10/10

Augustus: (chuckling) I can see why you’re so popular.

I’m happy that this (seemingly) is ending with Augustus offering Mike some kindness. I suppose my guess that he assumed Mike was going to be far more aggressive than he really was ended up being correct! There’s really no need to beat him up about it right now…it wouldn’t help the situation at all.

do I smell... self reflection?! ohhh~ tasty

Okay so, I just want to say that Augustus sitting down next to Mike is SUCH an important detail in this page.

It heavily implies that there’s going to be more discussion and honestly I hope it’s giving Augustus opportunities to bestow that Big Brother Energy wisdom onto Mike some more. Whether Augustus knows it or not he’s developed so well over the course of the last year alone and giving him a safe and sound home really gave him the boost he needed to be able to reach his potential as a person. He never stole out of the sheer thrill of it, he did it out of survival due to a broken home and even more broke social life. And here he is, present day, giving Mike the most important discussion he’s probably had in his young life so far. Augustus is level headed, knowledgeable, but firm. Exactly what Mike needs right now. I wonder where else this discussion will lead to?

Augustus sitting down also shows that he knows the situation between him and Mike isn’t going to escalate into dangerous territory. He’s sitting down next to Mike in a comforting?? way, and not hovering over him by standing and looking down on him. He sits relatively close, to further show that he senses the air between them isn’t hostile.

I also love how Augustus straight up pointed out that he fully expected Mike to go Bitch Mode on him for criticizing Sandy. Augustus even teases Mike a little, which is such an Augustus thing to do, and means he is not just in Protective Big Brother mode at the moment. I honestly never would have thought that these two boys would ever sit down and have a non-hostile, mature chat but here we are!! I look forward to the potential dynamic of them, you know? Mike doesn’t have a Big Brother in his life, HE is the ‘big brother’ of his family and doesn’t have an older boy in his life to look up to. So Augustus having this discussion with him is going to be such an amazing catalyst for him and I am all for it. Also, he can relate to Mike now because HE has to stay away from Daisy due to his fuck ups, and now Mike is going to stay away from Lucy. It's something they have in common now, lol.

Augustus is A++ big bro material!!

Mike is having some real character development. Having made it to this point, I feel like even though he has burned so many bridges so.e can be rebuilt and maybe they'll be stronger for it.

Augustus is best boi. Seriously though I hope that he can stay as the adopted brother in Lucy’s family even after he graduates. Like I wanna see him come to family Christmases and be welcome whenever. See him get calls from the Lucy family asking how he’s going and telling him how proud they are of him.

The fact Aug had been hearing out Mike. Told a lot just now. He legit do some development. Like I like him more then I liked him before. Like Lucy truly did save this man while he was down and for him to go talk to Mike alone and see his view. Truly told me about how important Lucy and Aug relationship. Truly it did.

Augustus has definitely come a long way. Both him and Lucy have been good for each other. I think Augustus is going to be good for Mike in the same way that he was good for Lucy. Lucy was a character that everyone seemed to have mixed feelings on because she seemed to simply not have it together. She was abusive to a lot of the people around her. Then she went through a lot of self healing and has turned into this amazing person. I think that Mike will hopefully try to do better for Lucy and will become a better person.