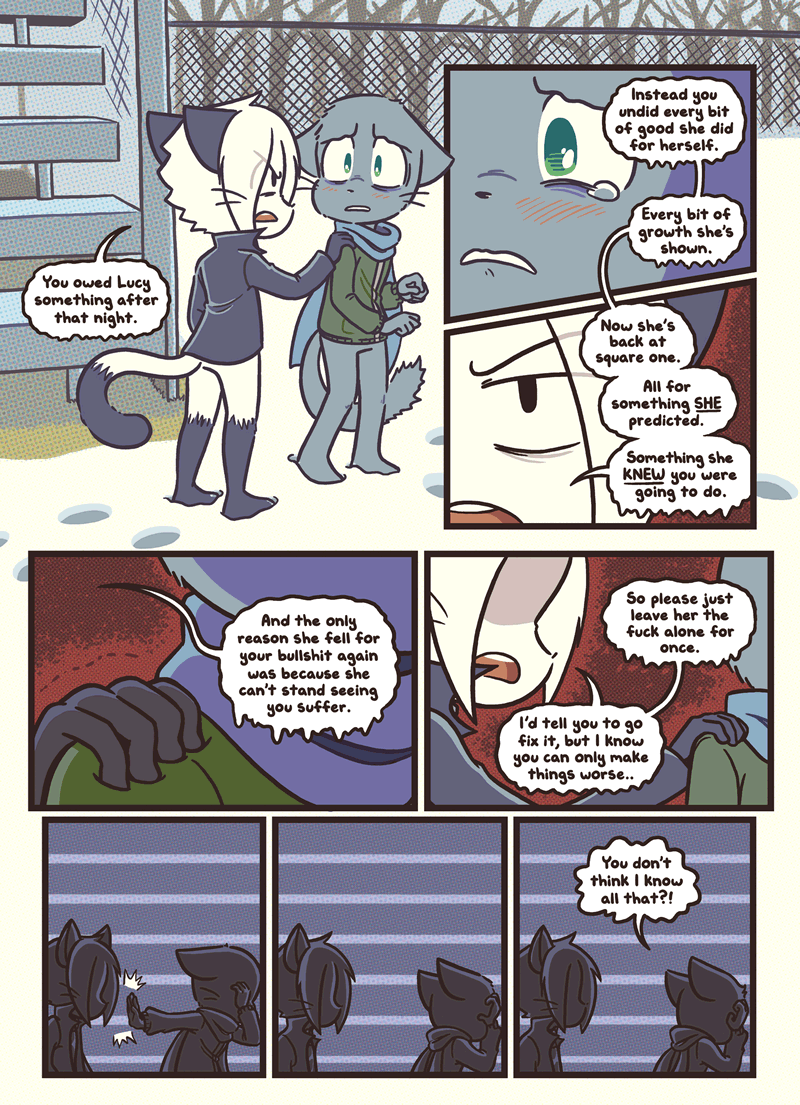 Veronica: “But it’s so much EASIER to disappoint Lucy, I do it all the time! :(”

Augustus is a true man. His development is so wonderful and he’s easily become one of my favorites

Augustus is literally my BFF and Mike is my ex. I really wanna see someone kick Mike's ass cuz at this point he deserves it

Augustus: No, because you’re a moron!

REALLY interested to see what Mike says next, especially since he can neither walk back his actions or do anything to rectify them. But I also wonder... if Mike has no other moves left, then what purpose does Augustus have aside from telling Mike to leave Lucy alone? I just don't see it ending there. I feel like there has to be more to this.

Oh gosh, how is Lucy doing??

augustus is the real defender of women out here. meanwhile abbey is (unknowingly) friends with someone who is actually taking advantage of a girl! i wonder how he'll react when he finds out what mike did 🧐

Guess he had to make the mistake to know what to look for?

You can tell Abby intentions is backwards if he don't see it. It's gonna be some shit when he finds out I'll tell you that.

I agree for the most part but honestly think him and Lucy really need to not pursue anything further than just being acquaintances, tbh.

Lucy deserves better than being his rebound friend/girlfriend whenever he's had problems with Sandy. Lucy does genuinely love him but it's not a healthy love for her at all and it seems it never really was.

Right. I’m not saying they should have gotten together, I realllly wanted them to at least clear the air but that got smucked up by Mike kissing her and then immediately going back to Sandy. Because I felt like Mike really did want to apologize properly and be friends again and maybe over time after GIVING HER SPACE (Mike) it could’ve happened. But again he messed that up and he’s lucky if her brothers never find out otherwise he might not see Graduation

Oh screw off Mike, this isn’t about you it’s about Lucy. Also, Augustus- this character development is so beautiful and precious. He is so good to Lucy. He kept his distance and watched her deal with him on her own- and then when it was time he stepped in and shut Mike down. Augustus is the true MVP.

Knowing isn't enough, dude. You have to take action and actually, y'know, *be* better. 🙄 But Mike isn't actually self-aware. He's just saying things he's heard others say and flailing it around as growth. 🤷‍♀️

I feel conflicted about this because Augustus of all people should know you really don't owe anyone anything, particularly on relationship fronts..... Mike did fuck up, but this still isn't 100% on him alone.

Augustus has had so much character development up to this point. I don’t think he’s saying mike owes her a relationship, he owes her to respecting her damn boundaries

Yeah like? I read it as though he meant like, Lucy comforted you after she continuously made a very clear effort that she wanted nothing to do with you anymore, for her own sake and his, and yet after Mike received that friendliness he pushed for more. When he should’ve taken the kindness she already showed him and let her be.

Man just when I thought I couldn’t like Augustus’s development any more. I’ve been waiting for a moment like this for YEARS man

Well gosh Mike, I kinda thought you didn't know! Coz if you did know ... it kinda makes you more of a dick, doesn't it??

This is the definition of a shit show

I actually have faith that Mike really knows that he fucked up and needs to leave Lucy the hell alone. In page 10 of this chapter he straight up says that he knows he won’t be able to comfort, apologize, or even talk to her anymore. That is him verbally acknowledging a boundary.

“I’m a piece of garbage, is that what you wanted to hear?”, it’s been shown multiple times in this comic that Mike assumes others think lowly of him and want to watch him suffer. Thankfully he’s wrong from what we know, but it doesn’t take away the fact of how he projects onto others. I don’t think Mike lied a single time since this interaction started, and I am not going to get stuck on the “Is that what you wanted to hear” line. I feel like it was wrapped up nicely.

To me Mike isn’t saying all of this just to assuage Augustus’s well earned contempt for him, or to make himself look good by admitting his flaws, or even to ‘play the victim’. He is telling Augustus his side of the story, just as the dude asked. Mike openly admits he has been toxic to the people around him, that Lucy meant more to him than he ever realized, and that he guiltily caved into Sandy wanting to continue the relationship. Augustus doesn’t know the whole conversation between Mike and Sandy but at the end of the day Mike still could have stuck to his guns by telling Sandy that he was still in love with Lucy and officially broke things off. However, with some of the things things that Sandy confessed to him, I can see why the idiot was won over. Despite Mikes protests and wariness she already made big changes in her life to make room for Mike in her life to prove that she wanted to continue things. She confessed that he was a ‘pillar’ in her life and that he was the only person in her life to love her for who she was before she became a famous model. Mike said multiple times that he didn’t want her to revolve her life around him, but I can see why Mike caved in as all the dude ever wanted was to be appreciated. This really sucks though, because Lucy herself bore her own heart like not even an hour before that! She was. Right! There! It’s a shame that he didn’t realize how much Lucy meant to him until things between them had been officially severed for good. Loool boi you fucked UP.

But does Mike know just HOW MUCH he fucked up? Maybe, maybe not! But just because Mike might not know the whole gravity of the situation yet doesn’t mean he isn’t capable of knowing he fucked up at all. It’s not mutually exclusive. This boy finally recognized and acknowledged for the first time he is toxic to the people around him like..what? 12 hours ago in the comic? The fact that he is even talking it out with Augustus at any capacity astounds me. By now he would have thrown an inevitable bitch fit at the mere mention of Sandy, but he’s actually pretty leveled so far by his own standards. How long will that last though? I wouldn’t doubt if Mike has a meltdown by the time this chapter wraps up due to his history with interactions, but I would love to be pleasantly surprised that he doesn’t! Emotional maturity can take a while to chew on, especially when you were in the wrong. But admitting you have a problem is the first step, and I would love to see Mike put that into action soon.

As for Augustus….He is a god send for this situation. He is absolutely the best character to have this talk with Mike and I am so glad this is happening. I used to dislike Augustus a lot since he was such a dick but I started to appreciate him a little more during “Trapped”, and finally “Love Again” made him grow on me. But this chapter? Is *chef’s kiss*, you know? The cherry on top of this delicious cake of a character. I am so proud of you Auggy.

Also, I really do want to see the reactions of the BCB cast when they realize that Mike was the driving force behind Lucys suicide attempt.

Well said, as for the suicide thing, I'm pretty sure they know. Remember when they got drunk at Rachel's birthday? Mike told them and Paulo attacked him. Then Daisy protected him and asked why did he never notice her?

Oooh my gosh, I totally forgot about that chapter! I reread it just now and at the very least they know Mike is the reason why she left Roseville, but maybe not exactly why. All things considered their reactions are pretty mild to what I had expected, but then again maybe they really do sympathize with Mike. They knew Mike tried to avoid Lucy as much as he could because he was sick and tired of how she treated him and no one intervened to try and help things out. So I guess they can understand that Mike met his breaking point and as a result it made Lucy leave. Oof, that is one hell of a chapter.

No lie, aug intentions is strong. The fact he seen Lucy development to the fact he witness her breakdown first hand. Lucy didn't go to her brother she went to Aug. She went to him because if you see it, Aug and her sort of became close when they had those development of being in each other shoes. We all seeing it pan out to something now. Like Aug would have still be in a bad place if it wasn't for Lucy. Lucy would have been in the ground if it wasn't for Aug. Pretty much Aug was her backbone as Lucy was his strengths in all this. They both felt like outcast and made it up with some solid growth. For Aug to step it, he didn't want to see Lucy on her lowest again. He had watch this girl hurt herself from Mike actions as well to get reflect on her pass behavior. Then to see Mike pretty to much put her on the back burner for Sandy. It's like he legit watch her on the mountain top then kicked her over while he took that place. He legit kicked her in the Mud. Aug legit see her with the mud on her face. He's cleaning up what Mike did to her. I hope Aug get Mike to understand. He legit made Lucy turn out to be some homewrecker to me. When he's the one wrecking it. Like this man legit wants to play house to a girl that legit got her emotions all over. I like Francis to its you now. She. Yeah want him back but this chapter hope Mike burn it off with Lucy and legit means it! I hope he tell her sorry for it. He making this girl toss and turn with her growth and nothing rile me up more but to see someone character development be Tarnish from someone else lack of acknowledgment. Mike here lack her feelings over hers. Now he's paying for it.