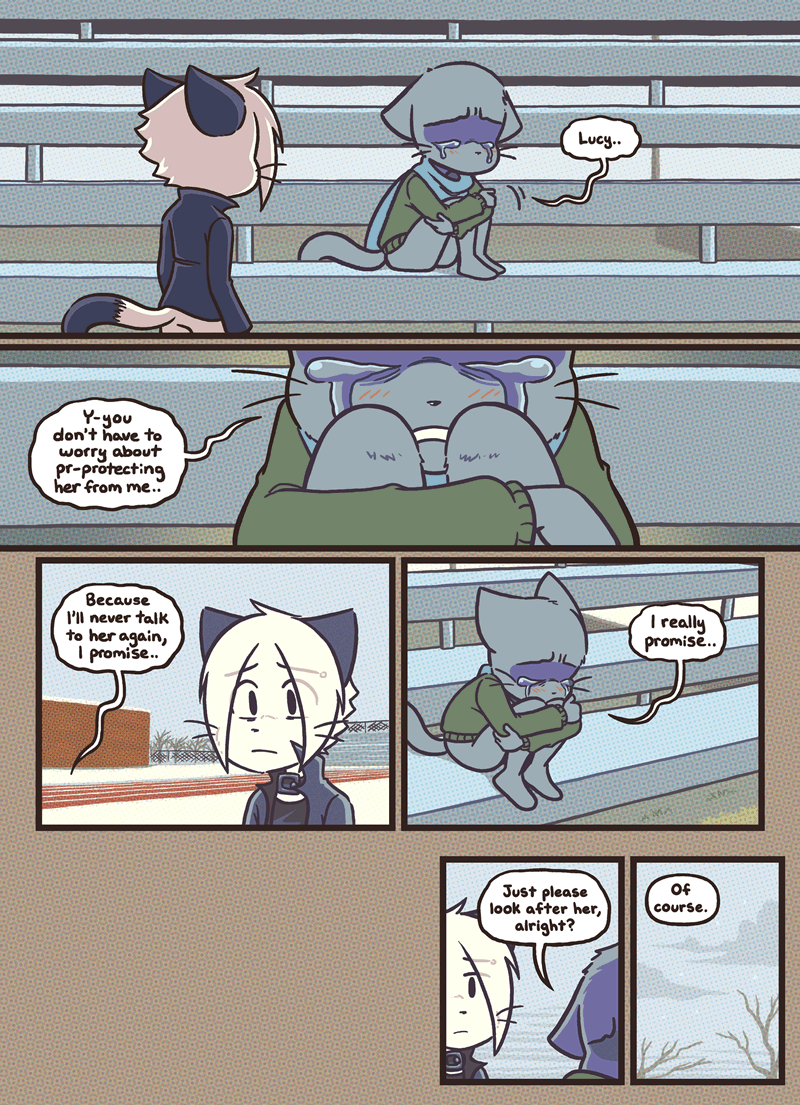 Why do I not believe him?? Also really? She makes it clear she wants nothing to do with you, doesnt want to talk to you and you ignore it to heal your own pain. And it takes this for you to understand that what you’ve done to her is wrong??

Yeah I don’t believe him, especially since he is choosing to stay in a toxic relationship. Sandy is doing what narcissists do: love-bombing Mike just as he was about to cut off her narcissistic supply. So even if he does genuinely feel bad, he’s transferring his trauma unto Lucy and victimizing her. Whatever issues Lucy had previously, they were issues that could and were addressed because she has a good character. Sandy has never come across as a kind or genuine person, and will actually cause more harm to the people in her life than Lucy ever could.

I’m going to get hate for this but i don’t think Sandy is a narcissist. Like Mike shes a kid and this is her first relationship. And i think she is still learning that it’s okay to drift apart and for your needs to change. She needs someone in her life who is more understanding of her work and schedule, and is able to come along with her for that ride. Because she’s in a very competitive industry that will likely drop her when she hits 30. And because of that she needs to work hard to make sure she can have a career and be able to maintain the lifestyle she’s accustomed to. Mike needs someone who is willing able to be attentive to him and his needs, without distraction. I don’t think Mike really understands the ramifications of having a partner who is in the spotlight like Sandy is. She’s going to be busy and forget to call and text. And her mom isn’t exactly happy or supportive of her having a boyfriend so probably doesn’t even remind her when she needs to call him. She’s more likely to purposely forget to tell her or remind her. They’ve both have become very different people, Sandy is building a career and Mike is still in high school and probably hasn’t even considered what he’ll do after high school.

Awww, maybe he really did learn something from all this. Poor Mike, he really is trying his best.

Augustus: I WIN! I WIN! HAHAHAHAHAHAAA!

Me, watching Mike cry his heart out these past couple of pages: Anyway-!

Here's hoping he keeps his word

Augustus is more of a protective understanding older brother to Lucy. Mike keeps digging his own hole and will just take the abuse that Sandy will give false promises. I doubt Mike will have some character growth but we all start somewhere

This page makes me sad :(

I can’t say that some distance is a bad thing right now for Mike and Lucy, it’s probably needed. But even so…

hes really going thru it

We're gonna hold you to that, Mike. You best do what you're promising.

It's wild how he claims that she's the most important person in his life, yet he couldn't say no to getting back with Sandy, knowing how it would affect Lucy. I wouldn't have wanted him and Lucy to try to get together if that had happened because she deserves better than being his rebound. Just saying his actions thus far have not reflected his words from a couple of pages ago.

But, hopefully, he sticks to this even when he inevitably has troubles with Sandy again. That would show some validity to the claim about Lucy.

It's kind of funny how Lucy has similarly shown opposition between her actions and words, since being back - her actions showing that she clearly still cared/cares for him, despite her repeatedly saying otherwise.

It'll be for the best for the both of you, Mike. I really do hope he actually stays away and grows as a person here on forth.

Lucy and Mike was toxic on both sides.. Lucy was physically abusive because she couldn't verbalize her feelings. Mike used her as a crutch. A fill in.

Am i the only one who thinks Mike is getting off a little easy??? Like-- this boy literally called Lucy a parasite and screamed in her face how much he hated her. Even confided in his girlfriend how he WISHED SHE WOULD JUST DIE. Mike has said and done too many hurtful things for me to feel any sympathy and believe his "she's the most important person to me" BS.

Because he's a teen who can't regulate his own emotions. Yeah it's not an excuse persé but it's the truth from the way their friends treated the both of them. They always expected Mike to be a certain way with Lucy. He was honestly THAT friend who has a partner outside if school, something that only a few people at the time did (before all kinds of SM) and honestly I knew people who had friends who were like "yeah a gf not in our school? Is she even real???" Friends, no matter how much you like them can be assholes and think it's not their fault and only trying to help their friend who is with them since the partner from the other school or town is an "enemy" to the relationship in person. Teens in general are stupid but they are capable of change and understanding if given the chance

I think I've said it before, but I think for the narrative of Lucy and Mike ending up together, its essential that Mike CHOOSES to leave Sandy. Otherwise Lucy would always feel like a rebound or worry "what if?l" Could Sandy change her mind at any point and steal him back?

Oh my god, I couldn't agree more! IF these two end up together Mike has a lot of growing up to do beforehand to get on Lucys level. Realizing first hand just how badly Sandy treated him will make him learn so many things about himself that hard way and cut her out of the back of his head for good. Him leaving Sandy will be such an important milestone of maturity!

Good point. Although I would note that Mike must independently decide to end the relationship with Sandy, regardless of whether in the future he will cross paths with Lucy or not. In any case, this is an important stage for his growth.

This is the right decision in the current situation, Mike :(

And we have 11 more pages ahead. A little more sad Mike at school and then the camera goes to Lucy?

I got a feeling Mike gonna slap that reality ticket a bit more. When everyone get the puzzle pieces to why Lucy is distance again and Mike is in the picture again with the gang. That's where our burning bridges gonna happen? Because he burned the bridge with Lucy. The idea of "bridges" is staying with me. That "s" isn't there without a proper meaning right?

I think once the gang finds out, some of those bridges will be burnt too. Paolo is sick of his shit, and I'm pretty sure Daisy will loose her cool. She likes him and all, but after Halloween, she's seen how toxic he can be. It could also be in reference to Jordan too, he can't reach out to anyone in her family.

Right! I am 100% agree with you. Daisy truly did see a different side of Mike. Plus Pablo was telling Mike, Lucy haven't said anything bad about him nor mention him. It's like everyone seeing mike. Sue didn't like how he was acting too. Like everyone about to just let Mike be until he change his ways. Even for Jordan and the family. They feel Lucy would be going back to her distance self again. So yeah no point of not pointing it out. The gang and Friends gonna cut em off for now. Hopefully in the future Mike mature.