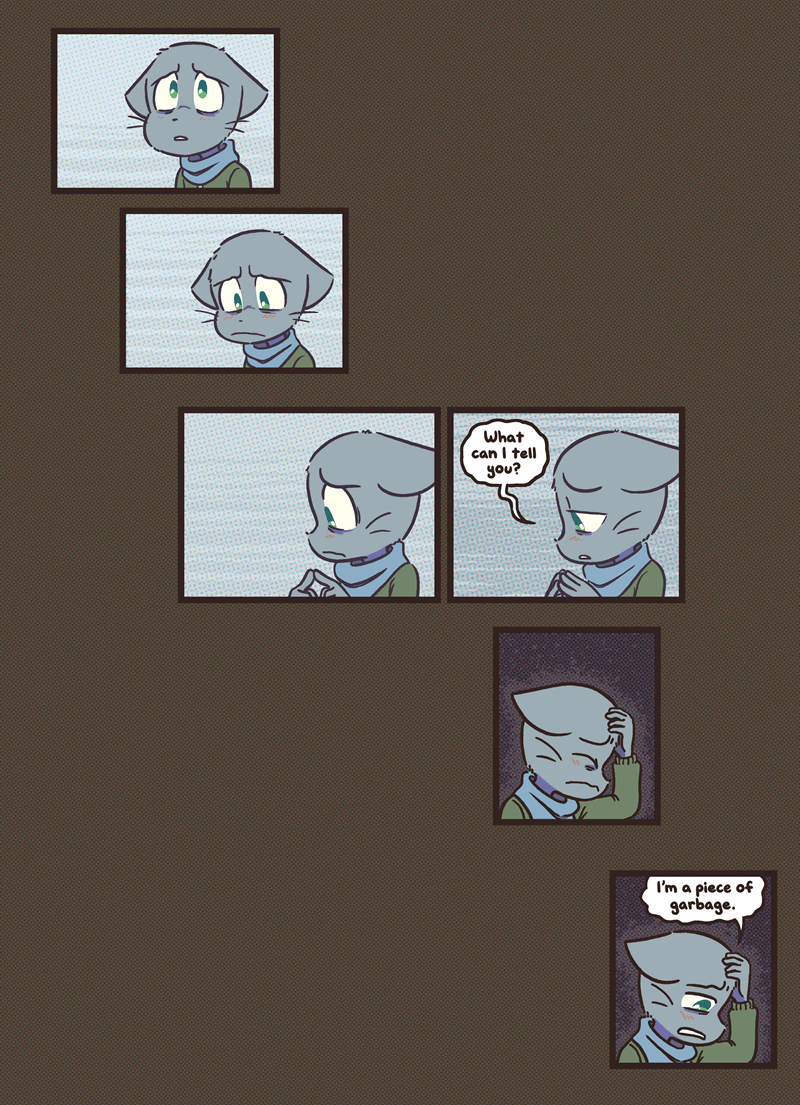 That is WAY more honesty than I expected

Absolutely! His perception makes up most of his reality, after all.

The boy definitely has self confidence issues and sees the world through a warped lens, but the fact that he thinks himself as ‘garbage’ for his horrible actions/mistakes instead of trying to justify what he did to Lucy is at least a huge step forward for him. He’s openly acknowledging that he did something messed up and isn’t beating around the bush or any other mental gymnastics. If Mike a year ago did something horrible to Lucy he’d brush it off as “oh great, Lucy is trying to make ME look like the bad guy!!” and argue his side of the story to Augustus.. Assuming Mike would bother giving August the time of day, anyway. He was very wary of the siamese as well.

But yeah, here? He gets to the point and doesn’t accuse Lucy of doing anything wrong or try to plead innocence.

ay at least he knows, that's a start for the kid

Yes. Yes your are we all know that.

Self awareness is the first step towards self improvement! Here’s hoping this is actually a productive conversation!!!

Eh I wouldn't say that, sure he's been mean but he has also been through a lot considering he's a junior in high school

Well.... admitting you are trash is the first step in not being trash.

Hot damn, what did we do to deserve such juicy chapters back to back?

I know right? I honestly expected that we were going to have a laid back chapter when I saw the seniors but I am sooo glad we get to see more of the Eternal Flame drama so soon. There's just so many things left unanswered and am thankful we got to drive right back into it. >:D

Right?! Ho! What a twist! I thought the same. I won't lie I was a little disappointed when it opened with the seniors. I mean, I really love Matt and the gang but what just happened with Mike and Lucy... Damn I just gotta see how the main group reacts, and how will they find out :D

More like very frustrating child, like I don't know what's a bigger problem what little self respect he has for himself when Sandy is involved or how little he cares for his friends feelings compared to how desperately he only want to make himself feel better. I won't say that makes someone a horrible person it's just annoying when they can't see the problem.

Mike is honestly not 100% in the wrong here. Lucy straight up told him to go home and think about it. This was always a possible outcome.

ME TOO!! I am so excited for this chapter. i didn't think it'd be a big Mike chapter but here we goooo

Mike :[ definently hope these two can have a productive conversation, especially with Augustus coming from a place of having so badly messed up in the past.

I'm glad he is aware of his poor decisions and seems to feel guilty. Maybe, just maybe, Mike can redeem himself. He is just a kid still.

I don't know. Mike shared a moment with Lucy that one night. The same night that Lucy said she was mean to him. So he got home. He talked to Sandy, who despite neglecting him has never been overtly mean to him. He then remembered Lucy's words, and knowing she wasn't his enemy, he took her at her word. She's too mean to him. MikexLucy would never last. He respects her, but won't ever return her affection.

With Augustus here now, he's getting defensive. He doesn't need to be. He's done nothing wrong, except reopen the possibility of a renewed romance in Lucy's heart. He needs to acknowledge that one bit.

Ya know, that's a good point. I guess for once Lucy hoped he'd have more self respect to take a girl who emotionally cheated on him. And also Mike constantly abandoning Lucy for her. Seriously, what was so special about Sandy?

At least he's owning it that's some growth

This is honestly better than I expected from him.

Augustus: The stinkiest brain ever.

Self awareness is a start but it's what does next that matters..

Such self awareness is progress. Keep progressing this way Mike and maybe you’ll become less of a piece of garbage.

Ouuurghh his body language is so cuuute in this... I'm so ready to hear Mike even make an attempt at explaining himself, gahh *loves self reflecting dialogue*

I do have to say that- as a person who has always loved Augustus- it’s very strange to see how the tables have turned in terms of fandom favor between Augustus and Mike. I think that given enough time and chances to grow that Mike will eventually return to good graces. After all, I still remember when everyone called Augustus “r*** cat” and I felt like an outlier for believing him more complex than what other people gave him credit for (*insert “I apply for a Veteran’s discount” joke here for being a fan from that far back*). I’d like to believe that Mike has a similar chance to grow, especially since for all the page time that he’s had I think that his character arc may only be just starting to bud.

Augustus is the best character.