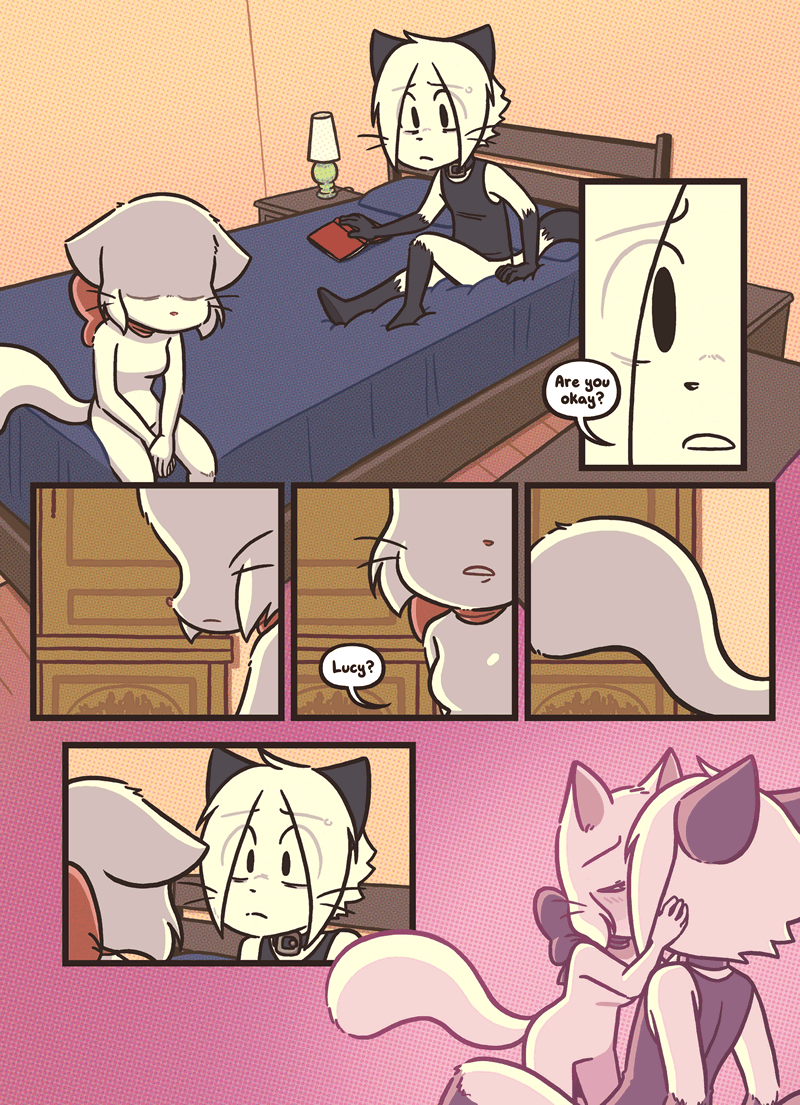 forreal tho, they either need to solidify their power couple status or things are gonna get real weird

OH DID NOT EXPECT THAT

Augustus: YOU'RE CONFUSING ME!!!!

Is this what it felt like to be a mike x lucy lover reading eternal flame??? The overwhelming feeling of “I do kind of want this to happen actually but NOT LIKE THIS”?? The agony! 😭

You described the feeling exactly!

THAT PAGE IS COMIN…

oh nooo ;;; poor Lucy really IS back to square one, she did this with paulo too way back when ;-;

poor girl, luckily Augustus knows this about her, I'm sure he'll make sure she doesn't do anything more that she'll regret!

I AM SO CONFLICTED RIGHT NOW AAAAAAAAAAHAHABAJJHHHAHDJFJFKKGKG

Lucy. When have you NOT regretted doing that???

I understand how you feel but, Lucy, this isn't the way to get over your heartbreak.

Poor Augustus getting assaulted. This is not a good way to find out your friend isn't doing well...

This is a flashback...

This is what August was talking to Mike about.

(Lucy losing all her progress)

Wait what?! I did NOT expect that!

https://youtu.be/Mi8za2kTJDs this is all im going to say

Did anyone else AUDIBLY GASP?

I was sitting on break and said “WHAAT” outloud

I did a "HAHA YO WHAT" personally

I was like, "I fucking knew it" soon as I woke up and read the page lol.

Welp at least we predicted this as a possibility! That's what happens when Mike rejects her... she makes out with some dude to see if they really care about her. First Paulo, now Augustus. Bleck. At least Mike knows he doesn't have the right to judge her about rebounding anymore!! And Augustus knows what he's doing, he doesn't wanna take advantage of her, and he understands why she's doing this. He knows how to cope with Lucy's mood swings and help her through them now. He's a good friend. :)

That took a turn, I thought this was gonna happen eventually

Oh man, I hope this doesn't bring up Augustus' past trauma, poor Lucy and Augustus.

Yeah, he has a knock for girls jumping him lol

alright I'm officially on This Is A Flashback bandwagon now. Oliver's comment on the page on the site today backs it up and Gus already said that Lucy was anticipating Mike to reject her in favor of Sandy so she was already feeling low the previous night. I'm so curious to see how this scene plays out in a way that had Lucy so cheerful when she went to school the next day.

Augustus X Lucy Ship: Come all ya young fellers that follow the sea, with a yo ho! Blow the man down, now just pay attention and listen to me, give me some time to blow the man down.

I had a feeling this was where that last page would lead. Lucy please, no :[

No wait stop! Lucy you're not better than Mike now! Daisy well flip! You two have a brother and sister relationship! I do not consent, I DO NOT CONSENT! ...... But for drama sake gosh I want them to go all the way!

Oh no. I felt like I knew this was going to happen. And it did.

I am actually an Augustus x Lucy shipper (romantic and BROTP are both awesome) but wooow this is not the right time, oof. Augustus doesn’t look like he wants it. His facial expression and rigid body language give that vibe to me. He also probably has trauma attached to this.

I am thinking this is a flashback because Augustus did mention that Lucy is back to square one, and a few pages ago had what I presume to be a “memory flashback” color transition. Augustus also mentioned in his talk with Mike in the bleachers that Lucy predicted that Mike was going to do something that would erase her personal growth. So now I’m sure that this happened right after her and Mike had their moment at the tree last night and this is how Augustus found out that something happened between them. It’s so sad that Lucy actually banked on Mike failing her, once again, and it caused her so much anguish that she’d uncharacteristically force herself onto Augustus and make him a rebound. Damn, dude.

Like...I can see why Lucy would feel comfortable enough with Augustus to do it. He has been her rock for a while now and showed multiple times that he genuinely cares about her and didn’t take advantage of her in her lowest points. But WOW this isn’t the time. Let’s not even mention how the rest of the family would feel LOL

So if this is a flashback then obviously Augustus doesn’t freak the hell out and will handle the situation well enough, but I do want to see how their dynamic here on forth carries.

LUCY IS GOING THROUGH IT RN

Gotdammit!! She was so close to being better about this😫 I know Augustus knows what to do

While this is my fav ship this is the wrong way to go about it Lucy!!!!!

From what i see. Lucy did felt it..i was right to say Aug and her been through a lot of shit stuff as it is. But Lucy no. Aug got enough on his plate. I know this comic about Mike and Lucy but man... Throw a twist in it. Make Mike grow and still like that friendship with Mike and actually have Lucy like someone else. I like Aug and Lucy together but not like this. No luc please stop. It's gonna damage everyone in the progress. I don't want to say....I don't think it's Mike burning bridges anymore... :( Aug might be in the most of it as well..

I've notices this is a recurring character flaw for Lucy where she tries to fix her emotional pain with physical pleasure. I hope Augustus or anyone really helps her off of this way of doing things

LUCYS DAD IS GONNA BE PISSED

AAAAHHHHHHHHH HOPE HE DOESN'T FIND OUT

LUCY BABEEE yeah my heart skipped a beat because I love this ship …. IN THEOrY!!! nooOooooo!!! I don’t want you to do this 😱😱 But I expect Augustus to react in a healthy way, so thisisfine.jpg

*screams and smiles desperately at the same time*

Btw the last panel of Lucy kissing him is really, really pretty. I feel kind of weird for saying this, but Augustus especially just looks really good in this perspective? Even if you just see him from behind. I think that’s really impressive! Also love the expression when Lucy turns around. Vero you‘ve been outdoing yourself these past chapters once again, with both the subtle and the attention-grabbing shots.

This. I’m really struck by her turn here, it’s such an unusual part of it to pick but it’s the perfect one at the same time. Really sells the desperation and confusion as she’s turning.

Did everyone miss it??? This is exactly what happened with Paulo after Mike's first rejection of Lucy. This is going to be a repeat of that!

No light no light in those bright blue eyes...

me, patiently meditating over the last updates and trying to temper my thoughts about where this is all going, but then also I see this page: >8O

as much as I love augustus/lucy, i feel like she's in too bad of a mindset to even start anything like that and can't see this ending particuarlly well for Lucy's mindset.

Just like August said, Mike has undone all of the good work Lucy has put into bettering herself with his last f*** up. It looks like she is falling back into feeling as if she needs someone to be intimate with her in order for her to feel like she is worth something to someone (I think that's what's going on at least, correct me if I am wrong.)... Im not saying she couldnt be attracted to Augustus but I don't feel like this kiss is coming from a place of happiness or romance.. She is just pushing herself onto the nearest boy that's close to her (friendship wise) in hopes that she can get distracted from the other feelings of sadness and disappointment she has. Augustus is being treated just like Paulo was.. But I guess Lucy feels like since she already broke off ties with Paulo romantically that she can't just go back to doing this with him... I hope Augustus can get her out of this habit.

Me just waiting for Taeshi to bless us with another BCI comic. "Another Bridge."