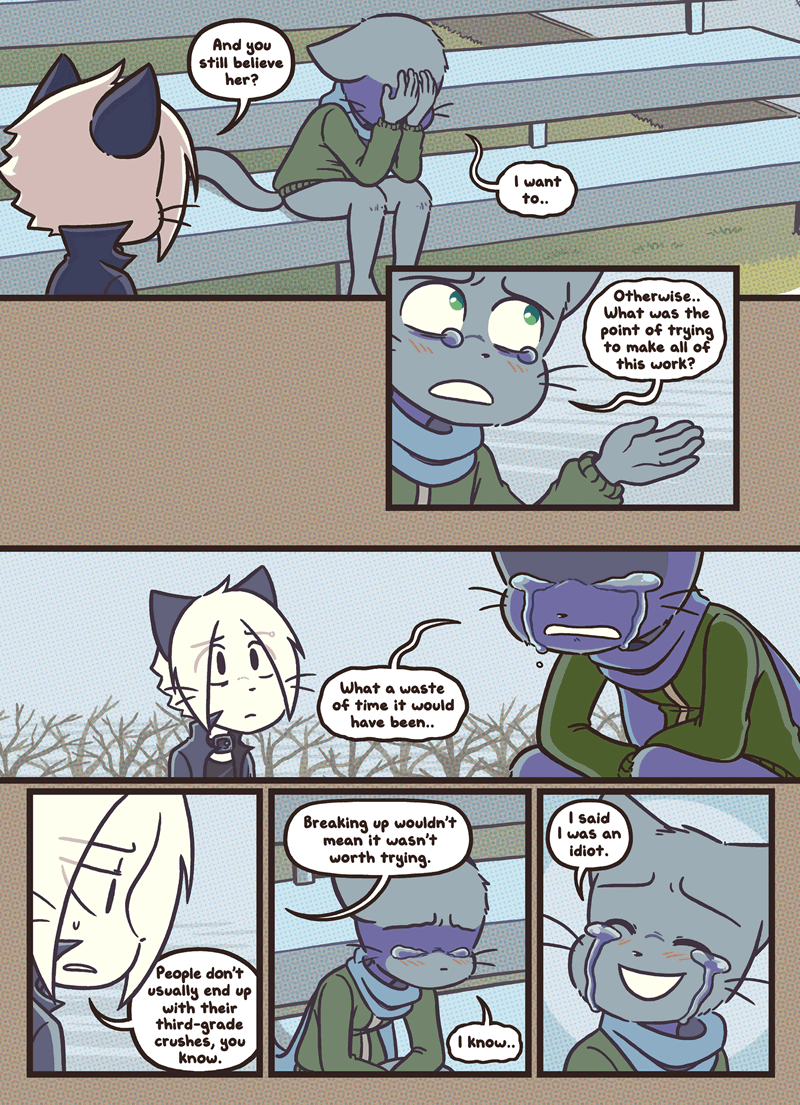 Mike really needs to break up with sandy

Mike, honeybun, that is called the sunk cost fallacy and you definitely needed to cut losses like yesterday

Come on, Mike. You’re so close.

Miiiiike 😭 it must be so hard for him to admit this. but once you do, you can't really fully convince yourself everything is perfect again, so even if he doesn't leave Right Now, I think this is a really good first step

I wonder if this will be start of him actually facing up to everything. He was hurting everyone around him and also himself.

Mike...it’s never a “waste of time” to break off from someone who ghosted you for the vast majority of your relationship. You literally tried so hard to single handedly upkeep what little semblance of a relationship you had with Sandy for SO long.

It’s honestly devastating seeing Mike struggle with this, and it’s so relatable. He’s put all his eggs in one basket when it comes to Sandy- the relationship HAS to work, or else what has he hurt all these people for? What has he spent so much of his effort fighting for? It wasn’t a waste and it’s ok to let it go, but a 16 year old can’t see that clearly :(

It's difficult because this lesson of letting go is one you absolutely have to learn on your own. For all the frustrations I've had with how he acts on his impulses, I feel for Mike here. And his tears to me seem remorseful, especially after he's talked a bit more at length about how he views the situation he's wrought.

Still, though... now the choice is up to you, Mike. What will you do about the mess you find yourself in?

Gonna echo the commentary for the current page: :(

That's some sunk cost fallacy at work for certain :[ making a decision you regret doesn't mean it's too late to look out for your best interests going forward.

No... she just has a mentality making her act and feel more mature than she actually is, causing her worldview to be skewed and giving/taking bad advice simply because she doesn't want to see people hurt. She didn't tell Mike to stand up to Lucy because Sandy wanted the competition for Mike out of the picture, she did it because Lucy was hurting Mike. In the same vein, she didn't hide Francis because she was stringing Mike along, she hid Francis because she knew how attached Mike was to her and thought him knowing would break him. To Sandy's credit, she tends to be pretty insightful with others, she's just... not great at helping fix the problems she finds in others. Hell, she's not even great at dealing with her own problems right now, really shedding light on how shallow her experience really is when it comes to navigating complex emotional problems.

Thank you for listing multiple abusive traits for us. Stringing Mike along like this is pure selfishness.

I'm in what I assume is a tiny sliver of the readers who actually really like Sandy. My interpretation of her is that the people around her, Mike included, have put a LOT of pressure on her during the last couple of years of her life to the extent that she doesn't know how to actually assert herself and prioritize her own happiness vs prioritizing trying to meet everyone else's expectations. I've always had a soft spot for her after "To The Top" and what seemed like a glimpse into the life of a lonely kid who's been denied the chance to just be a kid. "Model Girlfriend" doesn't do much to put her in a favorable light but I read that seemingly selfish behavior as someone who probably doesn't have a lot of friends her age that she ever gets hang out with in person and just word-vomiting all over the place out of enthusiasm to have someone there (my dad is retired and lives alone and does the same thing when I visit him). Suspicion further reinforced by the hints in the cut phone scene that Francis is indeed older and a creep, not someone actually acting in her best interests or who is her own age. Her snapping at Mike in that chapter registered to me as someone who is acting out of frustration after recognizing an undesirable truth: That she and Mike are just not compatible, no matter how much she wishes they were. She should have just told him directly instead of avoiding him but she's a kid too; think of how hard it would be to let someone like Mike down, who you actually care about and who you KNOW puts you on this insane pedestal. Takes a lot of guts to be honest and willingly hurt someone like that and Sandy doesn't have that gumption, but I don't think that makes her a bad person. Her trying to patch things up with Mike has all the appearance of someone reacting out of deep guilt to me, not deliberate malice. And ultimately - it's not Sandy's fault that Mike trashed all his friendships, harbored a secret crush on someone else who he treated like absolute garbage out of his own guilt, and based his entire existence around her. Like everyone else in the story, she's got a lot of flaws, but I don't think she's a monster.

I don't even know if I totally believe Sandy is happy with her model career at all rather than just telling herself she's happy, since this is what her life has been forced to be and her mother doesn't give her a choice in the matter, but that's legit just me projecting lol

I know a lot of people feel like mike hasn’t made enough progress yet, and while I agree he has a long way to go in terms of personal development, I think he’s showing a huge shift in attitude during this discussion.

This is a very different mike from the mike who would scream at even the mildest of hints that his relationship with Sandy isn’t ideal.

I truly hope that these two can break up and move on. I don’t think it’s going to happen immediately, but it really would be for both of their benefits. Sandy needs someone near her who actually shares her life, her ambitions. Mike needs someone who will actually prioritize him and share in HIS life. Neither Mike or Sandy can really provide that for each other, but they’re both too scared to let go.

Oh, and just to make it clear: I really really feel for Mike right now, it SUCKS to be in this position and learn this lesson :( Sometimes you can try and try and try and it won’t amount to anything. That doesn’t mean you’ve totally failed, it’s so normal. But it’s difficult to learn to let go.

I also see some progress here. In Eternal Flame, Mike blew off steam that had accumulated for months and became less aggressive and more inclined to listen to others.

Now we see how his mental bookmarks that have been with him for years are crumbling. Even though he is still trying to hold on to them, that's okay at this stage. In any case, the process has been launched and the first steps have been taken.

Well, in the next chapters, we will see if Mike will be able to draw the right conclusions about his behavior towards the people around him this time and whether the first timid steps will be taken to correct this, or he will need to stew in his cauldron of guilt for some more time.

Even if this weren't a textbook example of sunk cost, it still wouldn't be a waste of time at all if Mike exited all this with a better sense of what he wants in a relationship ((someone who will actually speak to him more than texting an emoji heart at him once a month)) and more conviction in his own self-worth and identity ((by not basing his entire personality on being Sandy's Boyfriend™)).

Yeah! Learning leasons about yourself and growing as a person is far from a waste of time!

*sighs* This poor idiot. Even if you could think about all those childhood sweethearts, they usually don't get together until they're much older after living their lives.