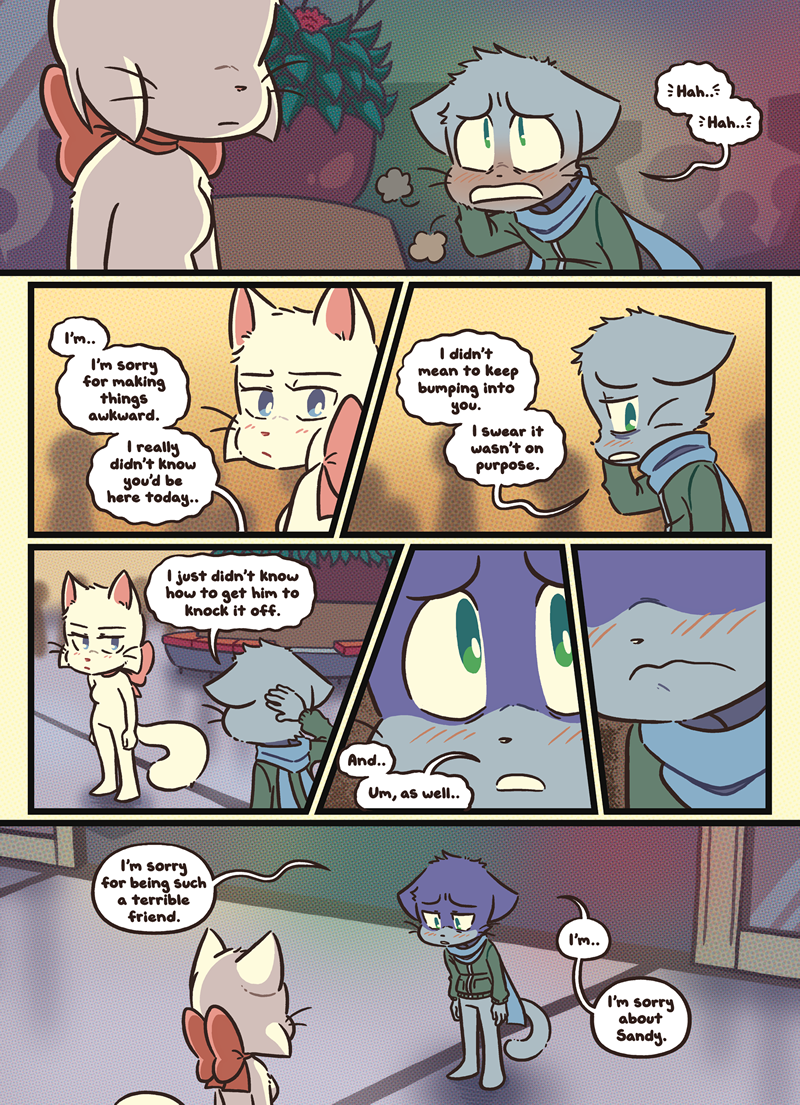 Wow, a heart-felt apology. I honestly wasn't expecting that

Ohhhh Mike. Good for you in finally speaking about this without losing your cool. But you werent a terrible friend. You were a terrible person.

Like, there's a ton of nouns I'd consider before even thinking of friend.

this is good stuff. this whole chapter has been fucking phenomenal

Laying his heart out having her turn away without a word is such a treat. It's retribution for how under the tree she opened her heart to him. At the end, I do hope they find some way to come out stronger on their own.

Need that popcorn eating david emoji for this

Why is popcorn eating david?

I love this part of the story, Mike is in the stage of his life where he knows he messed up and wants to fix and make amends with Lucy but him being around her is the problem and he hasn't come to terms with that at all

Or might not accept his apology at all, and that she's well within her right to make that decision considering how badly he's hurt her.

Mike: Well, that was easy. You wanna go to the Red Robin and get their famous Royal Red Robin Burger?

Lucy: The stinkiest brain ever.

Mike don't throw James under the bus for being nice to a stranger...

It's James, so Mike gets a pass on this.

It is strange to be honest. I do understand that many here will feel very angry and conflicted with how Mike responded, but , I do feel that with love it is very complicated.

Sandy , though she may not know, is quite the manipulation master. She knows he is who he is and won't be working all that hard to keep him close. And he is on the path of, maybe, getting hurt again.

I do not believe he is a bad person either with all that has been with his past to this point. He and she both now have ridden the same ride but at different times. The only difference is, if one will make the same mistake to see if their life is worth living.

I may be wrong, but this feels like the first actual apology he's made to her. At least, if I were in Lucy's shoes, the first genuine one.

Not the first apology, but definitely the first to come from genuine guilt without trying to get something out of it for himself. A LOT of the other apologies seemed to have been made with Mike expecting forgiveness from Lucy, and then getting frustrated when she didn't immediately forgive him. This one could definitely swerve in that direction too, but considering how defeated Mike is looking in this page, it looks more like he's laying out his guilt, rather than trying to make amends. (though the two are certainly not mutually exclusive)

He is making amends I am not sure why people think he is an awful person. He is a teen, who has also been a victim of manipulation from his supposed girlfriend. Who proceeded to then emotionally manipulate him to take her back. Lucy isn’t innocent either. You all seem to forget that despite how she knew he was in a committed relationship she kept pushing her feelings on him. She also was physically aggressive with him. I am not taking sides because they both are kids who have equally made dumb choices. They are both doing what they need to do to heal.

I don't think anyone is forgetting. I used to really dislike Lucy; but eventually, she DID finally accept that Mike and Sandy were together and he wasn't going to choose her. She tried to be supportive by telling him she thinks it's great Sandy is making the effort to visit him last December, she took the responsibility of their last team project on herself, so she wouldn't be in the way. She even messaged Sandy apologizing to her and giving her the heads up that Mike hasn't been himself lately and that he needs her. Eventually, she got herself into some therapy, is trying to make new friends, and avoided Mike. When Sandy broke up with him, she was there to lend an ear and advice. Yeah, they're both still kids and they're gonna do dumb things but it's important that Lucy actually has had Mike's best interest at heart for the last year or so (comic time-wise) and Mike has just been selfish.

When did she push herself on him... ? She supported them from the moment she found out they were still in contact. The only thing she did was say "I love you" which was something she needed to get out, not an attempt to force him to choose. Maybe Im misremembering.

I think it's because when she told her friends (Sue, Daisy, Tess) that she confessed to Mike and he said no, they got REALLY on his case. But again that wasn't Lucy's fault!! That was everyone else shipping them and wanting them to be together.

It isn’t even about mike that makes her equally toxic. Like she slut shamed that one chick at Sandy’s sleepover, or the mind games she does and continues to do to Paulo. I am not defending Mike but I am going to say she isn’t any better and idk why people seem to forget these toxic past events. If you all can say she is making efforts to change, then it could be said so is mike. 🤷‍♀️

And Lucy doesn't do any more mind games with Paulo. She tried to give him "What he wanted" (sex) because she literally then jumped off a building and was fully expecting to have died from the fall. Paulo was the one later being all "I'll wait for you~~" and Lucy said flat out NO. I don't know how those are mind games.

Is Lucy a perfect person? No. She still has growing to do. She did a huge 2 steps back (Because of Mike) but I think with her brother and Augustus on board she'll get there!

Mike CAN change, but we haven't seen him grow at all. Last thing he told Augustus was that he would never bother Lucy again and wow, here he is not even a week later chasing her outside of an arcade. How is that change?

Yeah to apologize and you seem to forget all the times she was hot and cold with Paula even recently. Paula was being stand up because he didn’t want to hurt her and knew she was only doing that out of fear of losing him. She has pushed him away and then pulled him back several times.

Nobody is forgetting, but Lucy hasn't done that to Paulo recently. All of that was before she left; literally a year ago comic-time-wise. The two of them still hang out during school and there hasn't been any drama between them. Lucy has been very upfront with every character since her return and is trying to cut out toxic people (i.e. Mike) but is still extremely caring. She apologized to Paulo on the Ferris wheel and didn't sugarcoat her actions. In Eternal Flame she apologized to Mike and told him " I was mean to you. I was bossy, violent and selfish... I took everything out on you, for YEARS! All I ever did was push you around. And now Sandy's just the same, Don't you know you deserve better than that?"

And she was trying to put space between them, while also still trying to make Mike feel better over Sandy. She never said "I told you so!" or was condescending. She told him she'll be there for him and asked if he was okay.

Lucy is taking responsibility for her actions

trying to set up boundaries

Please tell me what Mike is doing to be a better person? He's still lashing out at his friends (Paulo hung up and was about to break off the friendship bc of Mike's outburts), took Sandy back instantly, promised Agustus he would never talk to Lucy again and then broke said promise not even a week later by running out to talk to her.

If the argument is "Let's give Mike a pass because maybe he might change." I was hard on Lucy back when she was super toxic. Now I'm hard on Mike because currently, he's also being toxic.

Hmm, I definitely agree that it's a little bit much to drag up Lucy's past actions when she's already made such great strides to remedy them moving forward. Lucy is definitely in a much better place now, and I don't think it's quite valid to call people out for "forgetting" how toxic Lucy was when Lucy herself acknowledged that fact and has since grown to be a better person. However, I think it's interesting to consider that a lot of that growth was developed off-screen. Mike doesn't have that luxury, so we're going to be watching every slow, agonizing step as he starts walking down that path.

Quite honestly, it DOES seem like we've hit the starting line for that. He's finally come to realize that his friends are there to help him through hard times, and is seriously starting to internalize how awful he was to everyone due to his obsession with Sandy. (evident in his conversation with Daisy in Double Down) The true test is going to be this very next page. Every other apology Mike has made to Lucy, he was looking for forgiveness. If, instead, this is the one time he finally, genuinely just wants to admit that he hurt her and that he's sorry, with no ulterior motive... we could be looking at Mike taking one of his first steps to bettering himself.

I completely agree! Looking forward to seeing what he has to say on the next page!

Now leave her alone and never speak to her ever again 💕

It's too late to say sorry Mike.

Ugh... this apology is gonna ring hollow for Lucy.