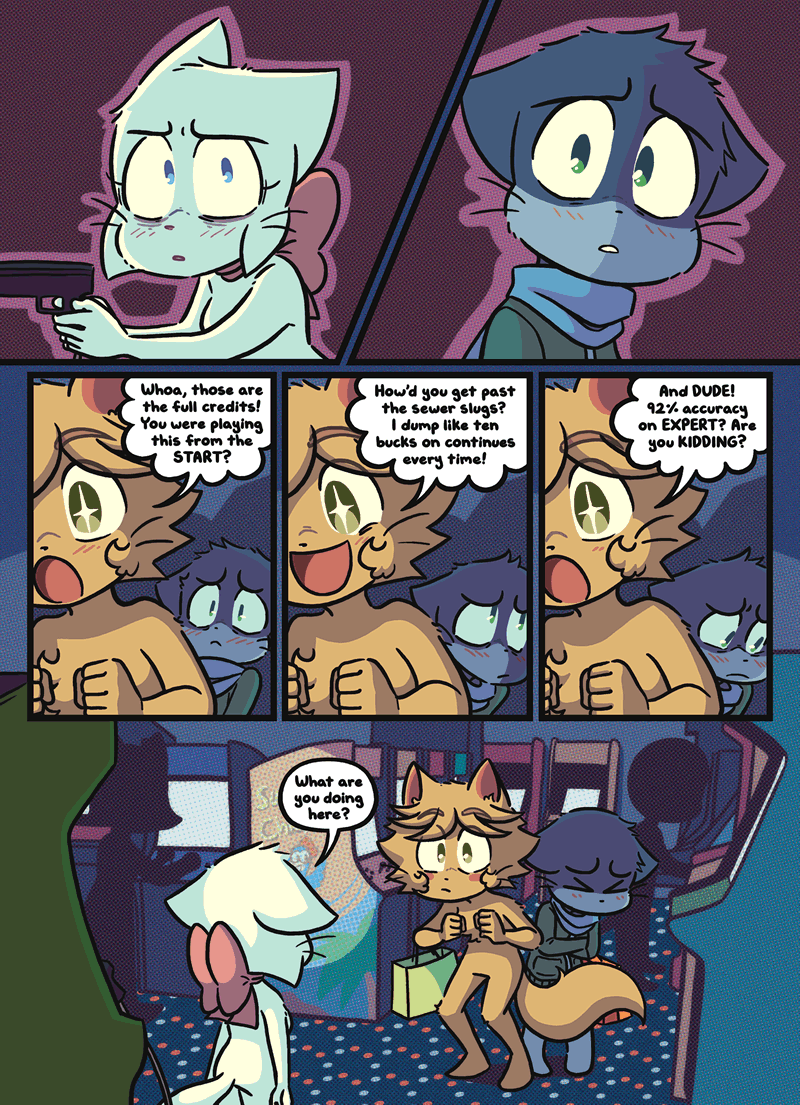 He has a tendency to get in her way.

James not reading the room again

James is oblivious as usual

I don't think he will lose them. I mean, Finn's said he wouldn't care if Mike had flipped the whole table on Paulo. I think most people can understand there's people you have History with.

They want to play arcade games, seems pretty obvious to me Lucy

just creepily staring at you as you mind your own business, the usual

Might come across as the bad guy in the comment section because in Mike/Lucy situations, Mike has pretty much been conditioned into being the bad guy (though for justified reasons) regardless of the circumstances, which means taking his side is a guaranteed way to get discourse thrown your way, but this is the one instance where I'm going to defend him.

He wasn't in any way trying to butt his way into Lucy's life, he was literally just trying to have a casual, drama free day out with his new friends but unfortunately stumbled into a bad situation and froze up because of all the negative emotions associated with said occurrence.

Also, they're in the mall right now which is a public space. He's sorta allowed to go there whenever he wants, regardless if Lucy agrees with that or not. Obviously if he starts acting like a petulant child and begins making a complete ass of himself I'll give him shit like everybody else but right now I'm in the camp he's done nothing wrong.

Obviously yeah he hasn’t done anything wrong yet but her reaction is reasonable. By her confidence in the game and ability I imagine she’s been using the arcade for awhile as a safe place and has come to expect she won’t be approached by anyone she didn’t want.

Yeah, that's a completely fair assumption to make and I hope my initial comment didn't come across as me trying to victim blame Lucy for having an otherwise reasonable reaction. I read her comment as being blunt and overly entitled of the arcade when in reality it could just be a case of she was just bewildered to see Mike again.

Right now I'm going to try and take a neutral stance on the whole situation. Mike is completely entitled to be at the arcade whenever he wants but should keep his promise and back away (go to a different part of the arcade at the very least) if he's starting to make Lucy sad/uncomfortable. Lucy is entitled to use the arcade as a safe place and feel validated in being upset by Mike stepping into said safe place but ultimately the arcade IS a public space for anybody to visit and she just has to deal with it, regardless if him being there makes her upset.

I didn't interpret Lucy's question as why is he at the arcade, just why is he at the arcade two feet away and staring at her. I don't begrudge him getting to be at the arcade at all, he has every right to the space that she does and I'll be miffed at her if she suggests otherwise. It's the specifically watching her so she's guaranteed the emotional whiplash we saw on the previous page when she turns around he's *right there* focused on her that I criticize. James or not, Mike could have just walked away. Anything is better than her having to turn around and get spooked like that. He's seen her out and about in the wild (the start of chapter 114 and 115) so the freezing up seems like an overreaction. Granted, it's at the machine that he and Sandy had a bad incident at, but he and Sandy had bad incidents elsewhere in the arcade and he was still really cheerful about wanting to go so I can't imagine he's that hung up on what happened there.

I'm also just harsh about it because I feel like it's a pattern that he doesn't respect her space in general. Lucy has made a lot of effort to avoid him since her return and he's repeatedly intruded on that. Offhand, him following her home from school when she had to call him out about hiding in the bushes, and then in chapter 103 when Sue called him out for hiding in the bushes again. Running into her at the tree, grabbing her as she tried to leave. As Lucy pointed out in chapter 96 page 23, Mike does a perfect job of avoiding her when *he* wants to, but ever since she came back has been popping up around her even though she doesn't want to see him.

That's kind of weird, I 100% thought she would just leave the game without a word to him since she beat it already, but since she actively spoke...with such a weird question that sounds too entitled to the public arcade space, she may have some stuff she wants to say subconsciously to Mike. I kinda hope she doesn't blow up on him right now or end up crying. I dont know how she is processing this...

I didn't read her tone as entitled, I read it as caught-off-guard. From her perspective, she turned around and he was just.. staring at her. I think it's an understandable response, especially after that one time he followed her home from school trying to stay hidden.

I am also in the camp that Mike Has Done Nothing Wrong in this situation, just offering a different interpretation of her reaction.

We know Lucy isn't entitled but that question she asked was, which is out of character, which makes me think she didn't even mean to ask that question. The obvious answer is that anyone's allowed to be there. So my point was that she could have walked away, she could have ignored them, scowled even and didn't bother with Mike. But instead out of her own feelings she just blurted something out. She engaged in conversation with them and I bet she has some burning points she wants to dig into Mike about. Whether she realizes it or not.

As for your pov, I think your right too that she was caught off guard. It's just strange the way she said "What are you doing here?". Is it an accusation? Or is she pissed he is in a place she enjoys hanging out? Is she legitimately suspicious that he is following her again? I don't think she would ever talk to him again normally.

Lucy should have just walked away. I love her, but she can't expect Mike to never go anywhere where she is. It's literally a mall.

Mike: Me and my friends wanted to play X-Men, you want to join us so we can have six players?

Mike: Alright, that’s cool by me. James, you're Dazzler.

James: Why do I have to be Dazzler?

I have a feeling she somehow knows or is aware about the drama that happened at the arcade between Mikey and Sandy so she's just genuinely surprised that he is there... and peeved because that means her safe space away from him isn't actually safe. Just a theory though.

Either way running into exs at the mall is basically a cosmic guarantee so Mike and Lucy shoulda expected it at this point.

James: Are you still mad at me for beating you a dozen times in a row in Marvel vs. Capcom 2 with my team of Cable, Sentinel and Iron Man?

People saying “it’s the mall” but to be fair the last time they met up unprompted where he didn’t just auto leave or stay out of the way was at the tree. Whiiiiiich he kinda made her stay at… and insisted on working stuff out…. kissed her… and then that Monday dashed her feelings on the rocks. She’s probably feeling terrified he didn’t just keep out of way or leave.

I’m pretty sure Vero confirmed it was Lucy who kissed Mike.

Back in December, there was hints of Mike avoiding video games, since they were meant for two players. And then after the Sandy getting upset in Arcade, he’s been avoiding going and Lucy since being back probably hasn’t seen him in there so it’s now odd to see him in the arcade.

Why she stayed to confront him though, I dunno

Yeah, this was what I assumes the question was for. I didn't see it as entitled, just confused since Mike has likely not stepped foot in that arcade in over a year. Which can mean one of two things; he just happened to get over his hang-ups with gaming and decided to revisit the arcade after all this time, or he went there looking for Lucy. Considering how stubborn Mike has been in the past, I wouldn't blame Lucy for assuming the latter, but at the very least she's giving Mike a chance to explain before throwing accusations at him.

ESCAPE WHILE YOU CAN

Like 'its the mall' sure but it's not as though Mike hasn't repeatedly followed Lucy around before to stare at or glare at her and this is basically the first time it's ever been an Actual coincidence...well except for the last time at the Tree which I think you'll recall didn't go great. I think it's kind of wild to blame her for even asking what he's doing right behind her staring.

Poor sweet James having no clue what he's getting himself into