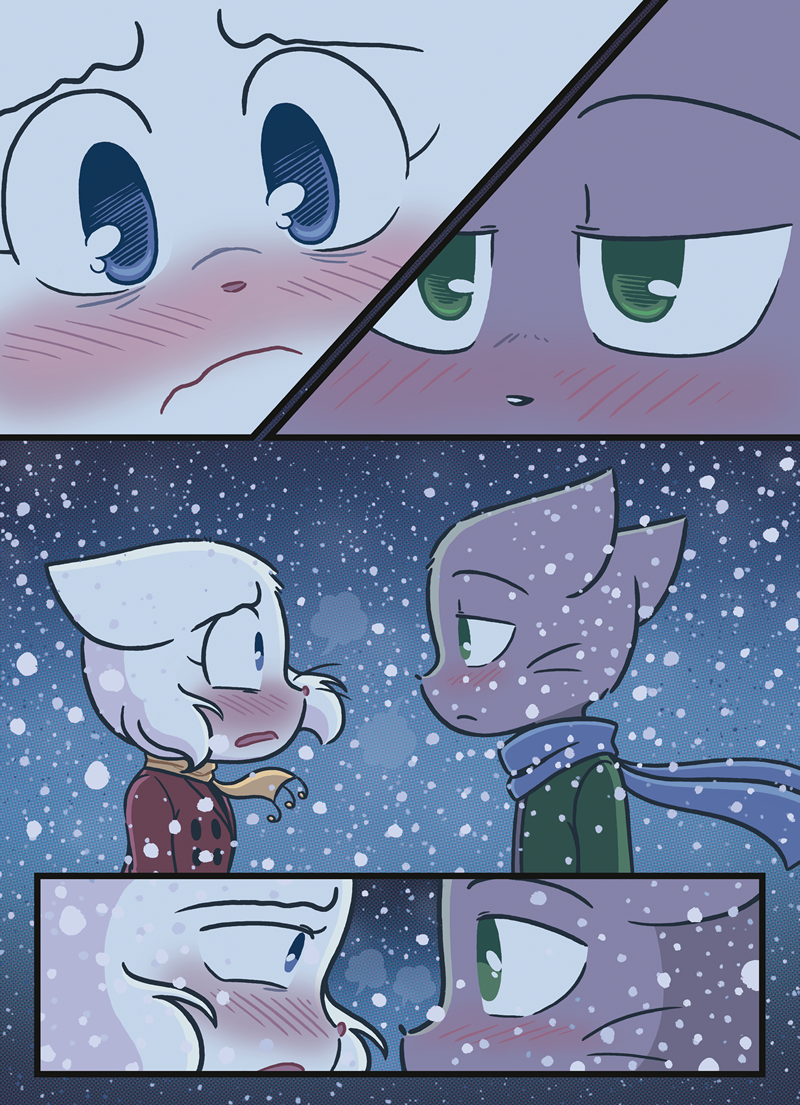 NOOOO THIS CAN'T BE HAPPENING

AIFUJGIYDIHFOUFT pLEASE I can't DO IT ANYMORE

WHAT ARE YOU DOING

Ok everyone take FIVE STEPS BACK and we can reevaluate. MIKE, LUCY, THAT MEANS YOU.

Please don’t do it for the love of fuck

The next page better give Mike five across the face.

Kinda feels like it's coming at this point, yeah.

Nooonononono no no nope. No. No!

My God, you two are gonna regret this...

DONT DO THIS TO US

While I support this endgame, someone grab the water spray bottle! Nows not the time for that!

I totally agree. I would love to see them together but a lot of talking and healing has to happen before then! aaahhhhhh

Bart Simpson: My purpose in life is to witness this moment.

Ew, gross, no. Do not capitulate!

Sure, Lucy, kiss him. Throw away literally all character development you've had.

He's so selfish! I hope Lucy holds her boundaries here. This is so unfair to her. I understand the haze of hurt and Mike wanting to feel something else in this moment.. But man.. This just isn't right lol

This page…is suffering. Kids please don’t do it!!!!

Why do I feel like she’s going to hit him and all of that wrath Mike felt for her is going to come flooding back?

I hope that she is only getting so close to his face so that she can spit on it.

I love this and hate this at the same time 😒

Oh gosh I hope Jordan or Augustus or SOMEONE appears on the next page to prevent anything more from happening PLEASE.

Watch she is going to slap him across the face

Okay then honestly it stinks. For me there was the possibility that it just went in "Have a good night, Lucy!" mode. But apparently he decided to play dumb and it’s really a shame because he managed to make up with Lucy but after that he can definitely say goodbye to Lucy. Then I remain on my position that in Lucy’s eyes I see neither fear nor disgust but rather like, I don’t know, if she had tears in her eyes not joy but a certain... relief? Then to each his interpretation of the eyes. To finish I really do not know what to think of what is going on because suddenly I am softened by the depth of Mike’s gesture which is to say that his sling (his identity) was not chosen randomly but it is the color of the eyes of the person he loves since now very, very long. And on the other hand, I’m in "Hey, Mike, what are you doing here, you’re free from Sandy and you’re gonna stop hating yourself because the slightest action you do feels like you’re cheating on your little girl, but, so don’t spoil your crush!". So here you go, thanks for reading:)

Are we not gunna acknowledge that Lucy looks like she's leaning in too and she's closing her eyes as well? At least to me, it looks that way. Either way, its a super bad idea

NO NO NO TIME TO BOUNCE NO

I am BEYOND unsettled.

it probably havent even been 30 mins since sandy pulled the dial off from him. whatre u doing dude

I really wish I could read Lucy's expression lmao. maybe we're not supposed to have a very clear understanding of what she's feeling rn, but from where I'm standing, she definitely doesn't look Overjoyed. but she is kinda... leaning in? maybe she's remembering the part of her who loved him? but she still looks uncomfortable?? I'm lost, I just hope this doesn't happen, especially for her sake rip

This kind of reminds me of the Bittersweet Club International comic Fork in the Road. Are you getting those vibes too?

I only hope it doesn't go the same as it went over there! Lucy has worked too hard on bettering herself, and that sort of outcome would set her back so far!

jesus mary and joseph what is HAPPENING

I feel so gross with this page!! Like you wanted her to die?!? Now you wanna kiss her?? Poor Lucy. AUGUSTUS SAVE HER

Pretty sure mike never told her to die

Pretty sure I never says he told her to die. But don’t you remember what he told Sandy in “Just Beautiful”? “Maybe it’ll be fixed if she just died”.

*chuckles nervously* what the hell 😬

She's gonna smack him or push him; I'm calling it. And lord knows, he'd deserve it. That's WAY too fast after everything and just breaking up. =/

What if Mike wakes up in his room?

Kick him in the nuts!! Mike you’re being such a creep rn

Yeah! He came looking for Lucy.

No, bad Michael, you stop that right now! You do jot get to rebound with Lucy, this is sooo unhealthy. You haven't done ANY of the work to fix the damage you did. This is not okay!

Me sitting in the corner sharping my ball slicing blade

The one true ship lives on.

This is going two ways

1. Mike is being a creepy idiot, or

2. Mike is going to say SIKE, then start insulting Lucy as some kind of twisted revenge.

This has possibly been said before but AAAAAAAAAAAA

This is especially rubbing me the wrong way because Mike has this history of badmouthing Lucy for ‚rebounding‘ with Paulo/Augustus when (even with Paulo) it was more about friendship and here we are …. Hooooh man ._. …… also agree with this having Fork in the Road vibes. Big yikers

I’m going to bop these kids with a broom.

Guess I was wrong in my comment on the last page ;~;

Oooooh shit. Not where I expected this to goooo.

But given the framing. They're being interrupted.

I certainly hope so! This really isn't the time or the place for such a hasty move to be made!

I wonder if Haley would come looking for him, given how worried she was earlier? It seems like one of the more likely options right now.

I honestly don't see how anyone can take anything in the last few pages as consensual when Lucy has put very clear boundaries up and Mike is just like oh? boundaries? what are those? Not to mention blaming her for literally every little thing that's happened and accusing her of being obsessed with him when she got back despite him stalking her- now he's going to try to use her as rebound...? oof.

mike dont mess this up pleeeaassseee

NO NO DON'T DO IT BROTHER

... AAAAAAND it skips to them at school next day, happy, cuddling in class and everyone mouth agape. SUCH SURPRISE!

no, MORE SURPRISE!! they are interrupted by.... Alejandro and Toby showing up! "Came lookin' for Augustus and what did I find? Green Eyes and his pretty girlfriend. Must be my lucky day!" Then Lucy and Mike team up to kick ass.

Oh no, its gonna start all over again

There is so much negativity in the comments. Just relax as there are 13 more pages of kisses waiting for us!