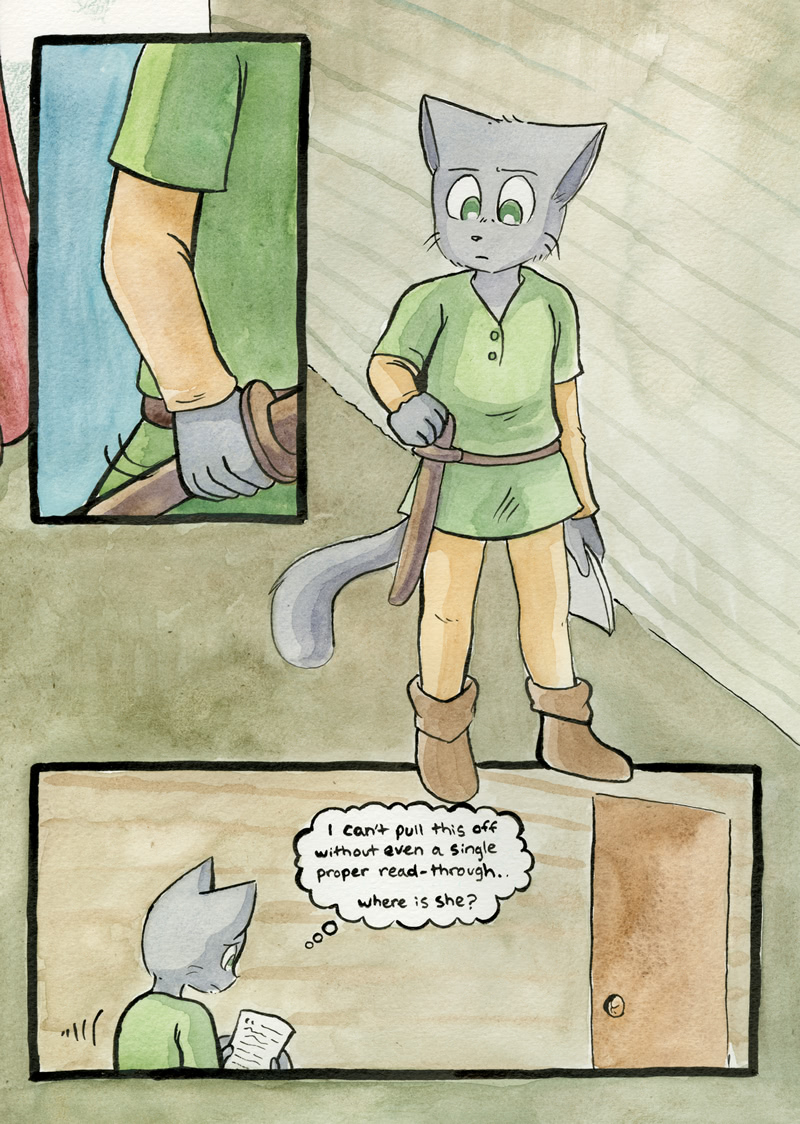 Veronica: oh hey there link i mean mike. what a LOSER

Haha, It’s Link! Where’s his cap? Oh well, I wonder if we’re gonna see Lucy in a Zelda dress next Wait…. Uh oh, I hope he needs a small key to get through that door, or else things will get very awkward.

If things get heated, Lucy may end up losing another piece of her heart.

Untill now Mike has managed to avoid raising the ire of the rest of the group. He criticized Lucy in private, and while others may know something’s wrong between them, Paulo certainly doesn’t know the whole truth. Mikes reaction will be priceless, no matter what his reaction is.

If he gets openly mad at or derisive of Lucy, I bet Paulo will leap to her defence, making my day.

As a side note, I’m actually kind of sick of Mike thinking that he understands Lucy. While he has known her for a long time, he doesn’t know everything about her; including how much she may have changed, especially recently. It’s unfair of him to assume she cannot change; it’s even more presumptious to assume you have some perfect understanding of someone elses motivations.

In short, I think Mike really has come to hate Lucy, and recently hate has blinded his perception of who she really is.

I look forward to seeing Paulo react to Mike’s expressions of his hate, if for no other reason than to see Paulo being really badass.

Though that kind of puts this play into an interesting light. Seems to me that Mike doesnt really think about Lucy unless directly confronted with her. After all, they have yet to even read through the script together. I imagine there performance will be memorable.

The whole reason Mike started to get mad with Lucy was when he felt replaced in Acapulco - when Lucy thought Mike had died, the first thing she did was cling to somebody else, Paulo.
Mike then felt like she didn’t care about him at all, she just clung to him because she needed him, and combined by her constant arguing with him, abuse and sandy pointing out that that’s not how a healthy friendship works, he began to dislike her.
When she confessed her love to him despite being knowing he was in a relationship, and he rejected her, the first thing all his friends did was jump on his back, calling him an idiot, telling him his relationship didn’t matter and that he should have reciprocated,
Despite what he actually wants. Think about how many times Mike has been hurt by Lucy over the course of their relationship and none of their friends did anything…
Then when he found out she rebounded on Paulo, it reaffirmed his feelings of being replaced, and it’s after that he ignored her.
Mike took things too far in December, but after reading from the holday in Acapulco to now, it wasnt a sudden shift - Mike was growing more and more upset over a period of months and nobody noticed, and come December after playing with Lucy and recieving Sandys text, he had enough. How did Lucy react when she found out sandy was coming? Before she acted nice about it, she grabbed his shoulders, and you see him flinching - he thought she was going to hit him. It’s possible he saw this as her being reverse psychological on him.
Now if Mike walks in on Lucy and Paulo kissing its going to reaffirm his feelings of being replaced and used - this isn’t going to go well.
I actually still like mike. Again, I believe he went to far, but he is an abuse victim who was pushed for a very long time. Both Mike and Lucy could have handled things better, but they’re teenagers.
I just hope he spills how he actually feels to the friends, cause in all honesty they’ve been a bit crap to him.